Life on the river

I was going to unhook the dock lines and head for Waiheke on this afternoons tide.  The morning started well, and I drove over to Silverdale to see what the “Wade River Festival” was all about.  While the people were all enthusiastic and the music that the two folk musicians were pumping out was nice, four tents and a half hour of haranguing by a group of maori who where supposedly giving a welcome speech was not going to hold me for long.
I did though sign up as a potential volunteer worker for a walkway that is being built from Silverdale down about a kilometre along the northern river bank .
The "Wade" river is the river on which I am moored, and Silverdale is the town at the navigable limit of the river, it was a nice place until suburbia caught up with it, a huge, sterile town center was built and the industrial area expanded.  There are patches of publicly owned land here and there, and the walkway project is one of several attempts to preserve that public land in a form that is attractive to use.

I got back to find that the forecast SouWesterly change had arrived, the ship surging around on her lines and the estuary white and streaky with what must have been close to 40 knots of wind ( The marine nowcast said Tiri channel weather bouy not far from the rivermouth was peaking at 38 knots) and I decided that I would be more comfortable here than out in the middle.

Consequently I am fitting the garboard planks to the little dinghy, will scribe and fit the topside planks this afternoon and expect to have the thing close to done by the end of the week.
When that’s done I’ll start on SEI (named after the small Whale species) as its both capable of voyaging around the gulf and rowing quite long distances so will suit the estuary. 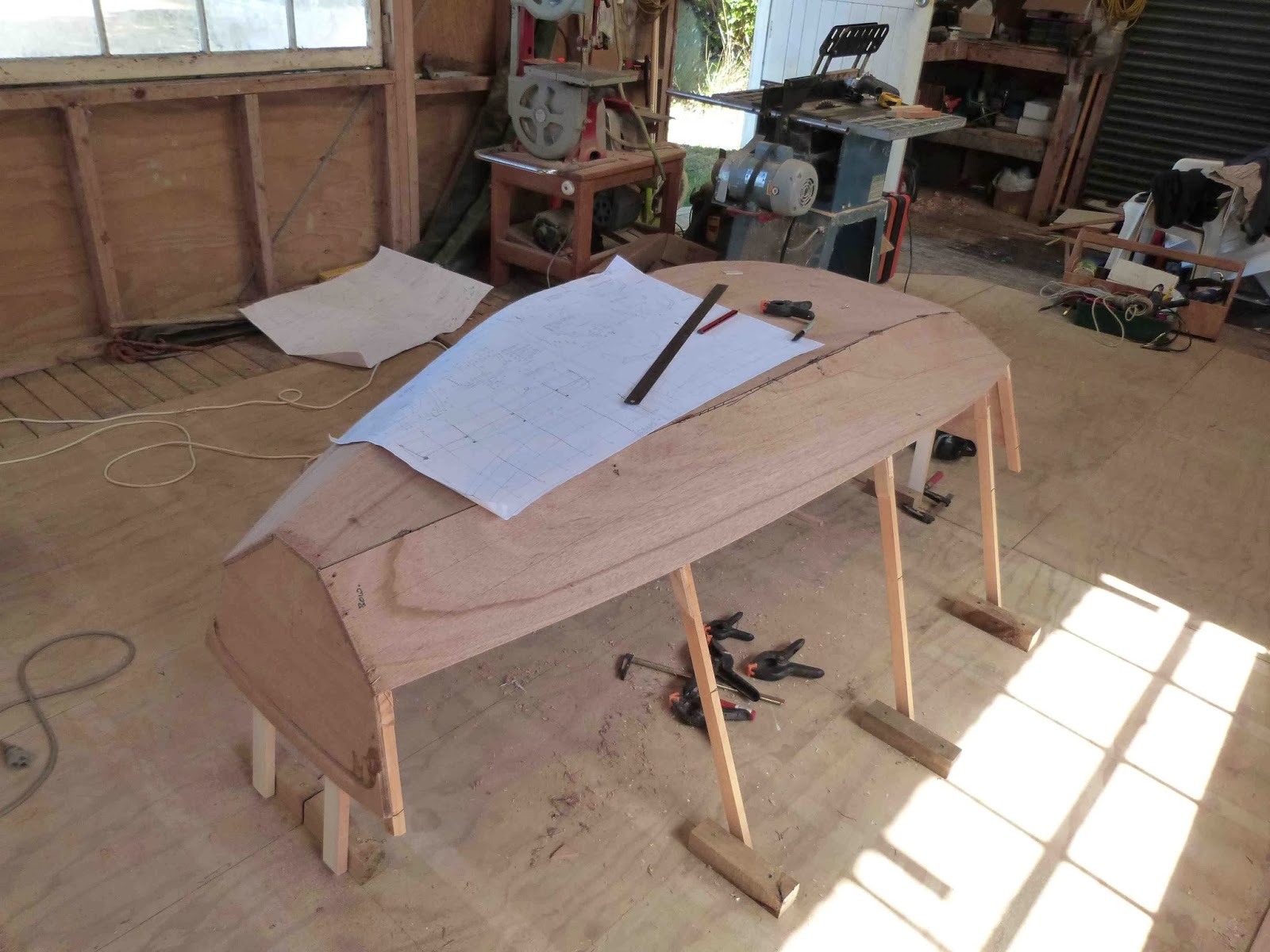 I've had several enquiries about this little boat, all going well plans will be ready soon.
I'll be putting the topsides planks on this afternoon and then it can be taped up.

I’ve painted up Dennys old plywood kayak, one that I built with her help more than 20 years back, and have twice now scrambled out of bed just before dawn on the right tide and headed up the river to watch the sun come up.  I managed to get my hands on a piece of carbon fibre tube the right length and diameter so have built a nice light paddle, makes things so much easier. Dawn when afloat so close to the water and sitting in a patch of native bush with the birds waking up is a very nice way to start the day.

The other job happening today is to scrape out and re putty a couple of the ships windows, they are most of them needing attention so with the warm wind to dry things out I’m doing a bit of prep work and will paint them soon.

While setting up the boatshed as a workshop I took advantage of a sale deal at Bunnings hardware,  they have a cheapo power tool house brand called “Ozito” and I’ve bought a cordless drill, a thickness planer, a power screwdriver, an angle grinder with sanding pad and a cordless multitool. That’s a little thing with a vibrating head that can take various blades or sanding heads, and I’m finding that the sander configuration is excellent for the small work inside the ship, so am just starting to get ready for a new coat of varnish in some of the sun struck areas inside.
Those amazingly cheap tools are some of them good, one or two very good and one or two terrible.  Dont buy the cordless screwdriver, its a waste of time and the 14.4 volt cordless drill is not brilliant, but the multitool is great and the other items work fine.

The current plan here, apart from all the other plans, is to make a grid alongside the boatshed.  I figure that if I put a ladder down from the walkway along the side, I can get down there and excavate a patch down to something firm enough to stand on.  I’d need to take the fill away, so its going to be a couple of buckets full at a time into the wheelbarrow at the top of the ladder and wheel it along to the end of the seawall to dump. It will be out of sight there so I wont get a well meaning greenie asking if I have resource consent.

I don’t think that I’d need to go to the gym for a while, but it will give me a nice secure space for “May” where she can sit between tides.

I didn’t get this sent yesterday,  got all involved with the little dinghy and then  found that it was suddenly time to meet someone.  So, back again.
It’s a near perfect day here on the river, 82 deg, gentle breeze, so for those of you who are stuck in the northern hemisphere winter here is a preview of your summer to come.  In the meantime I"m off out in the kayak. 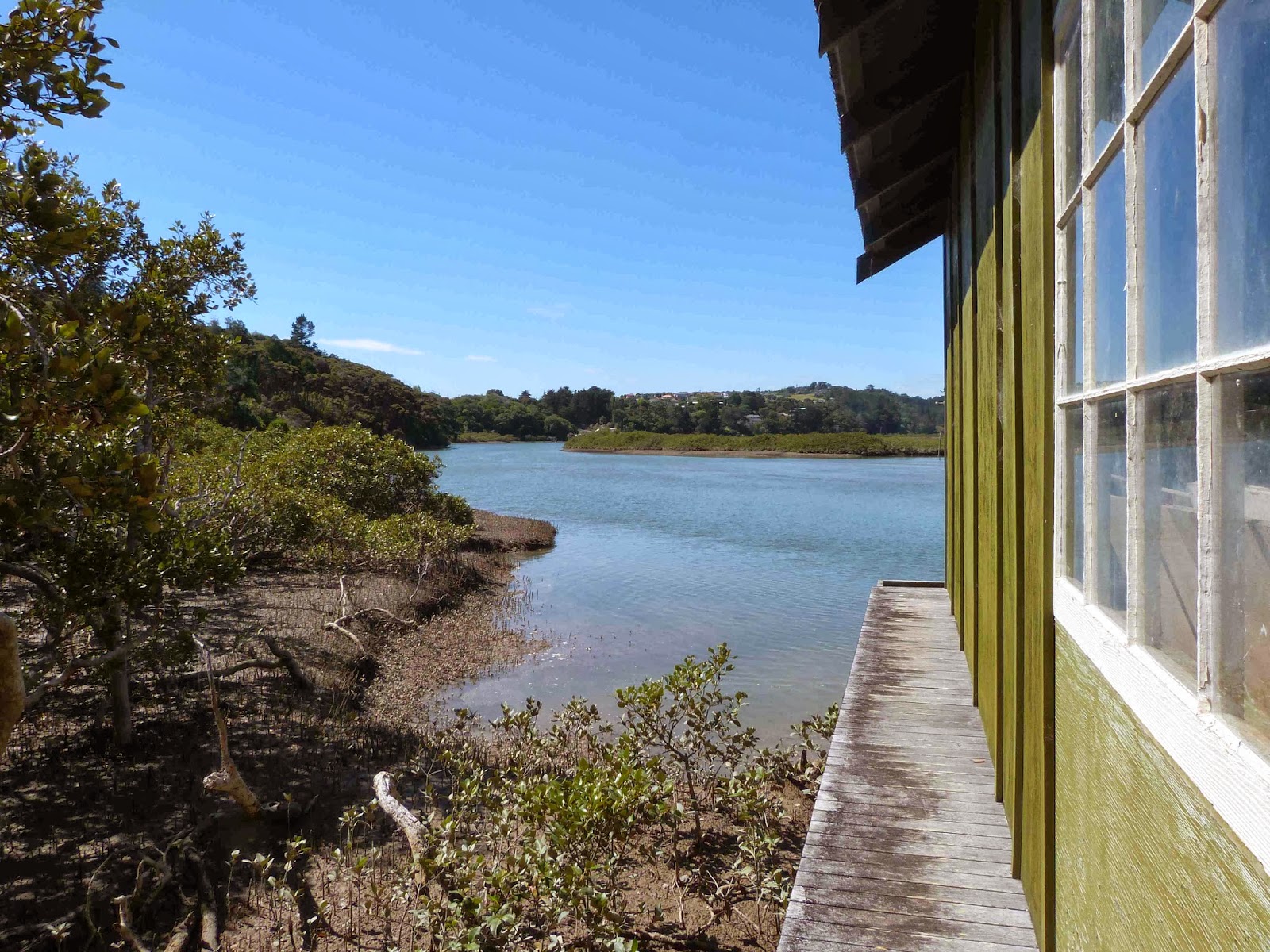 The view downstream from the boatshed.
Its about 4 miles down to the rivermouth, while the channels are narrow at low tide I'm ok above half tide. 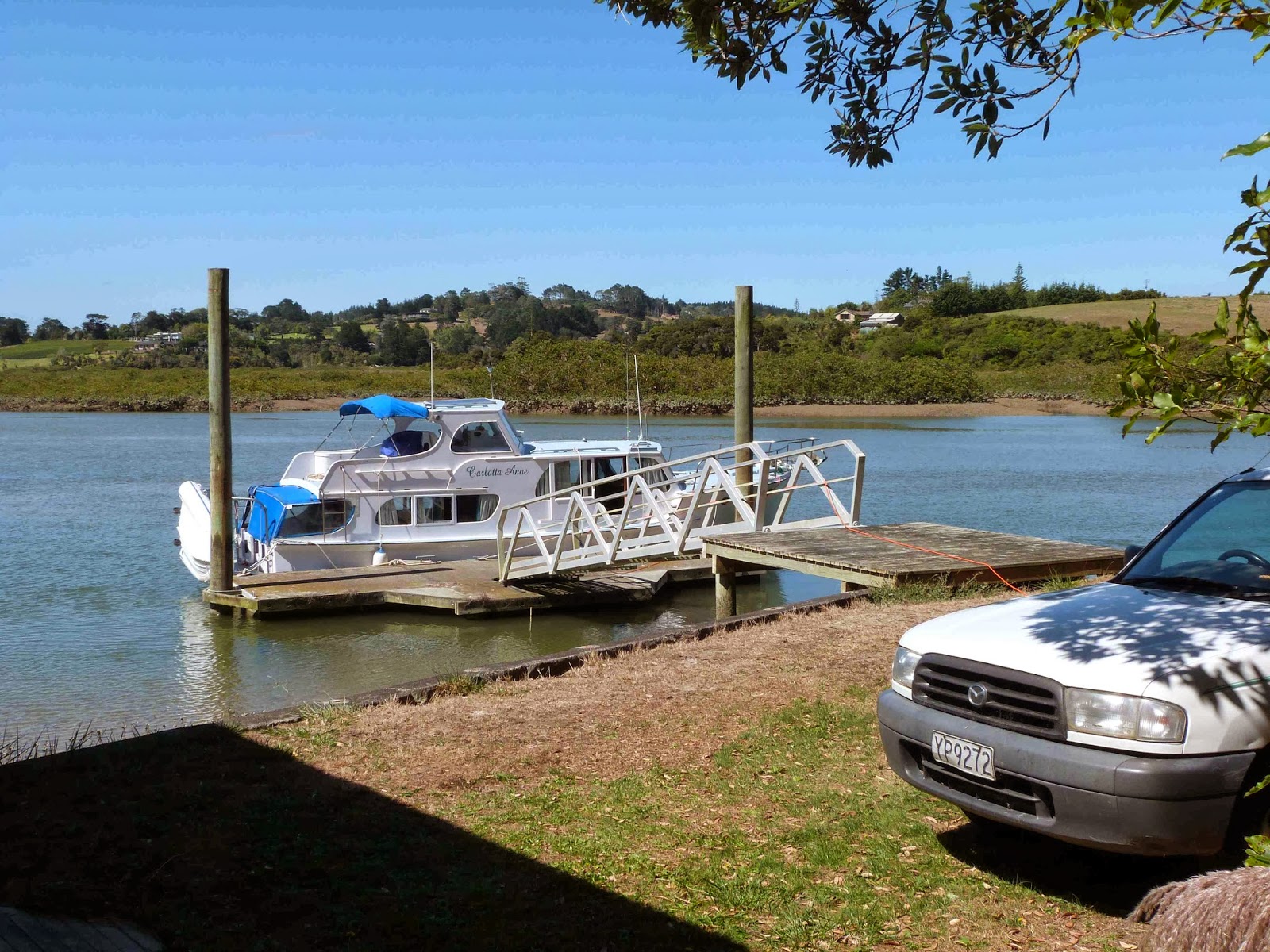 The view from the upstream side of the boatshed across the river.
Yours
John

Posted by John Welsford at 5:35 PM