Trapped by the weather. Not such a bad thing.

Being the height of summer,  the schools not open yet, and many people off on annual holidays work is very quiet at this time of year here in NZ, so I figured that I could combine a job on the ship with a little voyage. It’s the first time I’ve been cruising solo for a long time,  but the best laid plans and all that. The intention was to take the ship up to a tiny boatyard about 25 miles north of “home” and sit her on a scrubbing grid for a bottom scrub while the tide went out, and back.
I had decided to try a little local boatyard, one where my fee for using the facilities would not be to usurious and where the money would help support someone who deserved it rather than a corporate.
I'd known of the Whangateau Boatyard for a long time, but had not been there for years.  I called in the other day and met Pam and George, had a look around and thought it is worth a try so planned to go there and try the place.

Here is a nice article about Pam Cundy and her boatyard.

Here’s more on the boatyard.  It’s a great place to visit, Pam and George are welcoming to visitors and very much deserve any support that we the public can give them in preserving an historic site as well as the skills and the boats.

Go to the links and click on the boatyard one.  Its worth exploring the rest of the steam guys site as well.
But I got into Kawau Island to the historic Mansion House Bay, home of New Zealands first Governor, this was before NZ became an independent country, and anchored just off the lovely beach where the mansion is.
It’s a park now, and something of a sanctuary for  birds so dogs are not allowed ashore. My little mutt needs taking ashore a couple of times a day to be dewatered so later in the day we moved up to the head of the harbour.

The forecast was for a bit of wind, onshore, making the bar at the little estuary where the shipyard is a bit dicy so we sat, sheltered, and did lots of walking on shore.
Three days later, I’m still here.  Writing stories, cooking far too much food, and eating it, then walking it off with the dog. 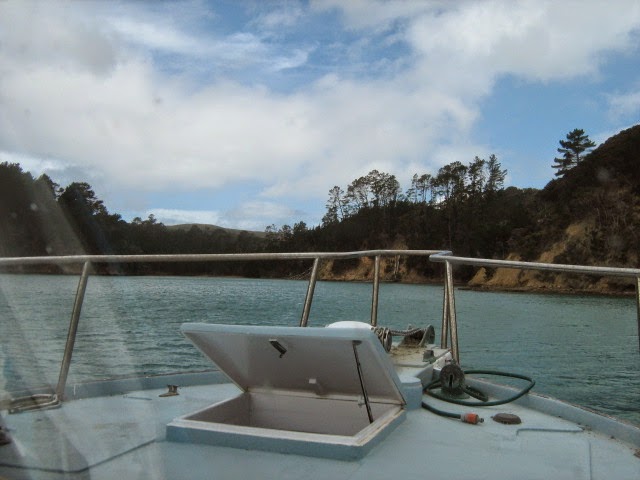 South Cove is very sheltered when the wind is from anywhere but due west, its north east today so its much better in here than "out there".
There is birdsong instead of traffic noise, an hour ago I caught a fish big enough for dinner,  Dimbleby ( I didn't name him!) and I will go ashore for a bush walk this evening, maybe a swim on the beach on the other side of the ridge, and the very few locals are friendly enough to stop for a talk.

I must say that its been good being trapped here.  No hassles, and not really much of a deadline, yes there is plenty to do when I get back, but I don’t have to be there just yet. 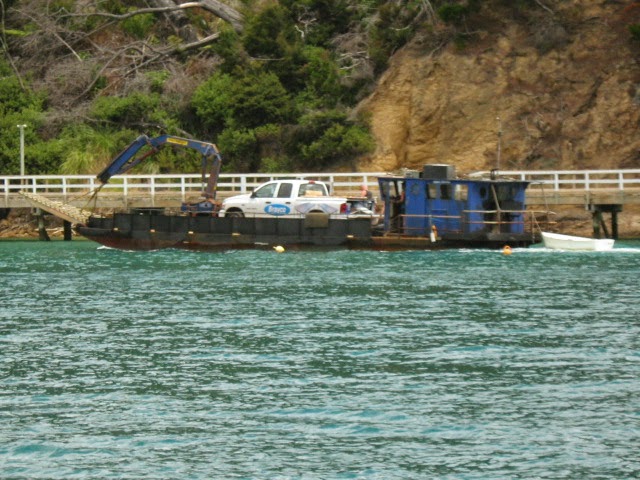 Local traffic, there is a little network of roads on this side of the island, and that pickup is being used by a carpenter to tote materials up to a new house on the far end of the road.  The barge is much better than its lack of paint would suggest, driving it would not be a bad job.

Perhaps, just perhaps, if as forecast the wind drops some this afternoon I’ll make my way back to Mahurangi and park in the estuary there to wait out the rest of this weather.

Posted by John Welsford at 6:26 PM