Starting to put in the fiddly bits that can make all the difference.

Inside my little shelter, cuddy, dodger or whatever it might be called there is enough width to sit across the boat, feet on one side, back against the other, tucked in under the “veranda” out of the weather.  There is space to do that while cooking or getting clothing out from the big dry lockers forward,  maybe even to get changed while its raining outside.
I’ll have VHF/SSB radio, lights, and GPS on the bulkhead and the cooker, with pots and pans, condiments and such will be mounted on the back of one of the big hatches
To access the latter, the hatch swings open, and is latched there, to put away again, just close the hatch and dog it shut. The cuddy is a multi use space, and its important that its comfortable to use.

But sitting in there, dreaming of being out at sea, a problem came to mind. It was damn uncomfortable!  The inside edge where the side deck meets the “cabin” side is in just the wrong place, it cricks the neck, leaves the back unsupported and, as I said, is very uncomfortable.
There is too the issue of the little bits and pieces that need to be ready to hand when out there sailing, the main stowage in Long Steps with its air tanks sealed off by screw top hatches are not suited to this use, it takes too long to access them, so, on with the thinking cap.

The answer, a pair of lockers that fit in under the side decks,  the faces sloped a little to make a nice back rest, the floor of the locker seated on top of the second stringer down from the gunwale, and the space divided in two halfway along.
Finishing the lockers at that height means that there is still space to brace me against the sides with back against one and feet against the side of the boat under the lockers on the other.

There are cutouts in the face of the lockers for access, those will have stretchy nets over them so things stay put but easy for a hand to pull the shock cord down and reach in.
What goes in there? The hand bearing compass, some granola bars, the small thermos flask with the hot chocolate in it, my spare hat, ( I seem to have left hats in the sea in many places) gloves, sun cream and such.

I’ve dummied those lockers up in 6mm plywood, tacked them together with epoxy and after that set up, have taken them back out to coat with sealant and paint the insides, They need a little sanding then they can be fitted back in with glue and screws to hold them in place and the standard of comfort will be vastly improved, all the way from say, half a star to three quarters of a star.  The local cheap motel might be 2 stars but the view from Long Steps little camping shelter will more than make up for the difference in amenties. 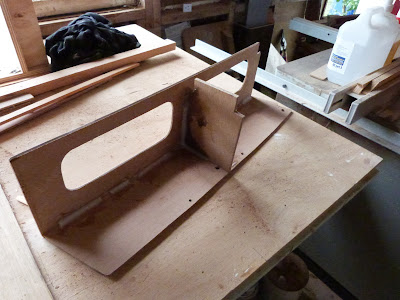 Ready to be finished off, coated inside and out, then permanently glued into place. 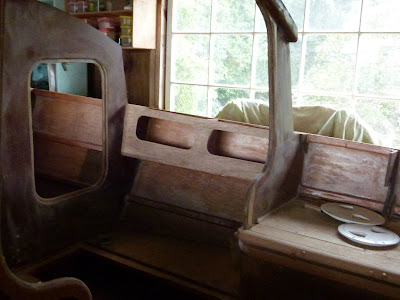 Its just sitting there to test fit for size, but you get the picture.  Yes there are drain holes in the little locker floors, but I sincerely hope that I never get any water in there.

Other progress, I’ve fitted the seat top nosing piece to the starboard seat, hidden the screws with “proper” wooden plugs, and have fitted the doubler under the after edge.  That latter is an area where I expect to be standing up at the helm quite a lot, and the doublers mean that I can put a much thicker rounding on that edge so making contact with my shins a bit less painful.

As well, now that the seating, including the moveable rowing seat, is in place I can begin to contemplate what the rowing position might be.  An idea that is cooking away in that maze of wandering paths that is my mind, is that if I make up some tall rowlocks I would be able to stand up and row facing forward, pushing on the oars to move the boat rather than sitting facing aft and pulling. That would be a good way to rest the muscles, taking it in turn with the more conventional rowing position, as well as being good for manoeuvring the boat into a small space such as a dock or marina berth.
Two piece oars! I will be needing long ones, so its off to Duckworks Boatbuilders supply for the carbon fibre oar sleeves, I’ve used the smaller ones on lighter oars, very successful, but this will need the big ones as the oars will be around 2.8m long ( just over 9 ft).

While the brain was working, and yes there are times when it doesn’t, I began construction of the anchor stowage bin under the tiller.  With the anchor there I can veer it or retrieve it from the cockpit which will mean that I don’t have to go out there on that tiny foredeck when it’s a bit rough on the water.
Having sides, in just the right place means that I can very easily put seats out from the bin to the sides, just in front of the tiller bulkhead, still leaving space in which to stand, those seats will enable me to sit, back against the curved coaming and one arm resting lazily on the tiller, my weight in the right place when the boat is reaching or running. Comfort again. Pleasure in the sailing of a small boat is largely about being comfortable.