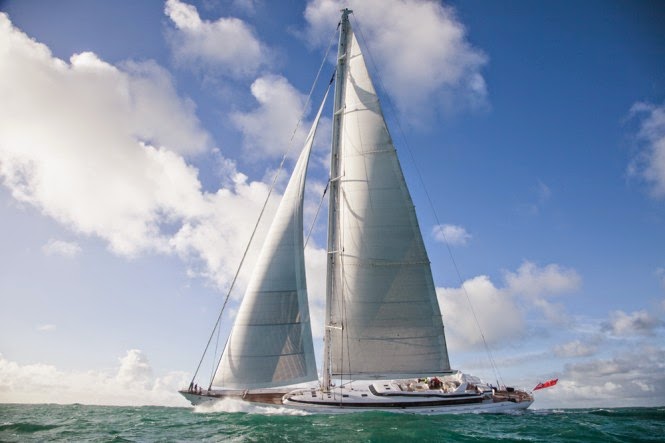 This is the superyacht M5.  Her mast is 88.5m high, read on. Those tiny things on the bow just inside the outer forestay are people, full sized.

I had an opportunity to have a look around part of the factory at “Southern Spars” http://www.southernspars.com/Home   in Auckland this week,  gobsmakingly mind bogglingly amazing stuff.  No cameras allowed  but I did ask if I could “talk” about what I saw and that’s ok so that’s the subject today.
This outfit makes carbon fibre masts, booms and such, has autoclaves that look as long as railway tunnels, robotic machinery for cutting the carbon and fiberglass sheets, paint robots, all sorts of computer controlled machinery for purposes I could not fathom in a simple walk past.

So heres me, among all that stuff using a 24in plumbers pipe wrench, a paint stripper gun for heat and a bricklayers hammer to unfreeze a corroded collar on a sawbench spindle. “Appropriate technology for the job” I told one guy who walked past with eyebrows raised.

Out in the main part of the assembly bay there is a mast that is over 90 metres long, not feet, METRES!.  A football field in length! Inside its full of hydraulics, electronics, expensivelics, ( I just coined that word )  and its going to be the tallest mast on the planet, for a few months anyway as there is a bigger one going to be built sometime soon.
Just to give you an idea, those huge old J boats that sailed for the Americas Cup had masts that topped out at less than half that.
There is a boom in the next bay, big enough for me to walk through!  It will be set up for in boom roller furling so there is a lot of machinery to be installed in there, the stresses are staggering so its seriously strong. Huge amounts of carbon fibre, literally tons of it, think of that when you are buying a roll of 6oz fiberglass tape!

The amount of money involved is beyond comprehension, remember that this is a “toy” boat, not used for the earning of money, a status symbol. A big and probably very impressive one for sure, but not a practical ship in any sense.

I don’t mind though, think of how many people earned wages while building it, while making the materials, while transporting it and fitting it up. Spending money on toys is fine by me as it keeps people in jobs that pay pretty well, then they spend their money locally and so on.

No I don’t want to discuss economic theory,  but when you see the workers carpark full of nice cars, and think that this is only the mast shop and that its maybe 10% of the total project, lots of people will work on it and get paid for their efforts.

As an industry we’ve come from adzes and drawknives shaping tree trunks for masts to this in about a lifetime, what does the future hold?