About 30 years ago I was lucky enough to walk into a very special shop, all woodworking tools, and it was closing down.  The old Yorkshireman who ran it was retiring, and it was all to be sold.
Off to the bank, came back with a wad of cash and I told him to keep count and put his hand up when I ran out.
Wow!
One of the things that I bought was a Japanese pull saw,  I’d read about them, but had never ever seen one let alone used one,  but it was a revelation to someone who’d been using ordinary carpenters saws and a ratty old tenon saw.  Fast, smooth cutting, effortless, and accurate, way better than anything I’d ever used before.
I bought a handle, and three blades plus sharpening files ( known as “feather files” after their unique shape) and used them for many years.
Two touch-ups on the teeth with the file were all I could manage, but even so those saws last a long time and it was only relatively recently that they were so worn that I could not make progress on ordinary wood.
There were a number of mail order tool companies who had these but they were all wildly expensive, amazing tools that had been hammered by 99 year old master sawmakers and tempered in the blood of virgins born on the eastern slopes of the sacred mountain as the sun rose above the horizon on the birthday of the emperor (etc. etc. , you get the picture) and my budget did not stretch to that.
It was about that time I met Chuck Leinweber and his brand new BoatBuilders supply company.  Bingo, one of the first transactions was my purchase of one of his Japanese Pull Saws,  I don’t bother fussing around sharpening them any more, the files are hard to find and very costly so I just buy a new blade now and again.  Cheap, good, does exactly the same job as the one described above, and I would not be without them.

Why I am on about it today, is that I’ve just replaced the blade, I build a boat most years, cut through epoxy and the glue in plywood, hit the occasional nail or screw, cut hardwoods and soft, resinous and salicaceous woods, even plastics on occasion. The blades generally last me for a couple of years even with this kind of abuse. 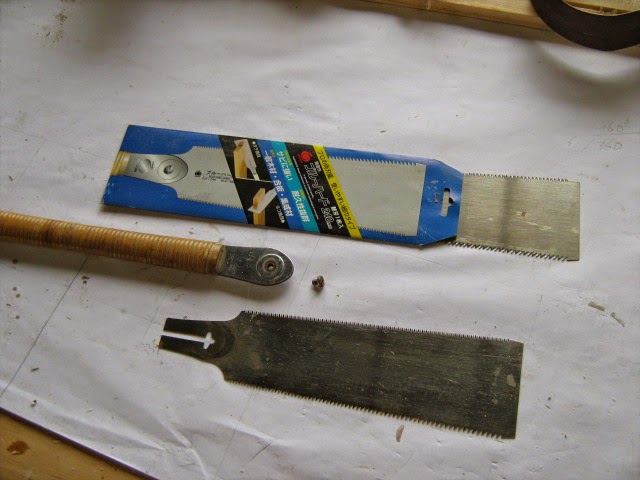 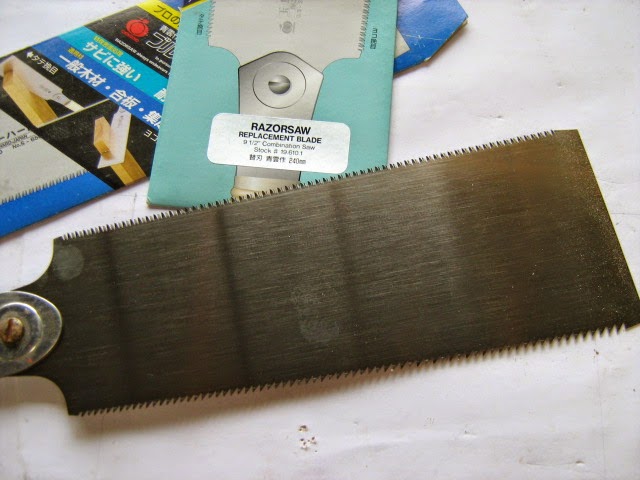 Rip saw teeth on one side, and cross cut on the other, fine kerf, ( slot) easy to use, very clean smooth cut, and versatile.
Posted by John Welsford at 8:48 PM