Librarian Felice and boatbuilder Ben have just been in here for a couple of days.  I’d not met them before, but their niece lives in the house just up the track from my dock and they were wanting to come in and stop in order to have a couple of days doing things like attending a cricket world cup match.

Their ship is a Chesapeake bay deadrise sharpie type, somewhat based upon one in one in a book by American small boat historian and writer Howard Chapelle. http://en.wikipedia.org/wiki/Howard_I._Chapelle
The Mary of York is steel, centerboarder, 38 ft long on deck and a superbly comfortable cruiser.  She’s sweet to the eye and well laid out, no Ben did not build her but I suspect that the interior and rig have been the beneficiary of Bens expertise.
Being very shallow draft and almost flat bottomed she can sit on the mud, and as the channel alongside my ship is so very narrow we snugged her in alongside the shed.  She was bow up somewhat when the water left her, but safe and sheltered.

They play Ukulele and Recorder too, I’ve just started to learn same, and we had a lovely little session with me trying valiantly to get the chords right as they played. With boats, sailing, books and music we’ve a lot in common.
Its been lovely having them here, and I’ve been invited to visit them at home, yet another reason to go for a drive up to the Bay of Islands where they, and several other friends live.

Pakistan downed their South African opponents by the way. 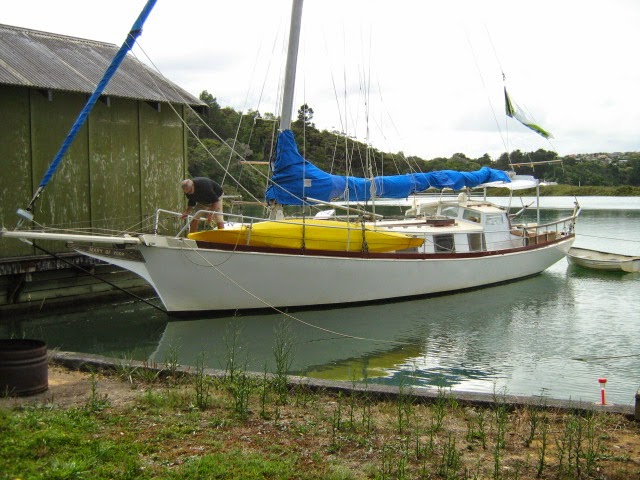 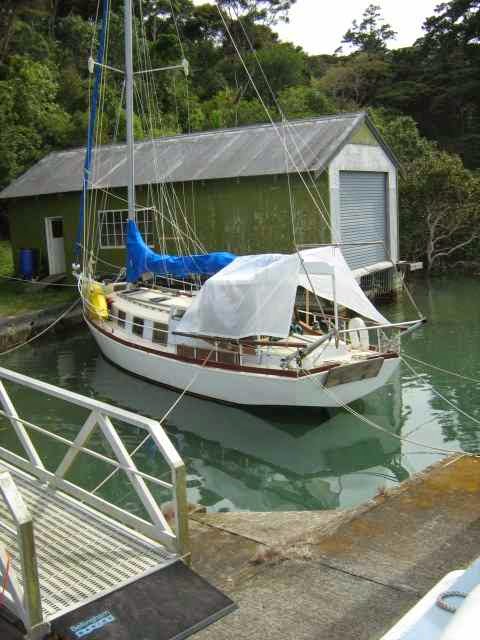 I’ve been a bit preoccupied, life gets in the way of the important things such as working on SEI.  But yesterday I put the breasthooks in both ends, and today will be making the decision about side decks or blocked inwales on the gunwales.
Side decks will keep the water out at a higher angle of heel, blocked gunwales will allow me to tip the water and sand out when I pull her out after a sail, plus are easier to build.

The other constraint is what wood have I got, I’ve some strips of 10mm x 24mm left over from ripping the mast staves out of the cheap Baltic Spruce that I’ve used, I can use those and laminate them into place along the blocking which would work well, and that might be the way to go. Otherwise its breaking into a new sheet of plywood and I’m zealously saving my meagre stock  for a bigger project later on.

Decision made, funny how writing something down makes it more real.

The breasthooks are each made of two pieces of 18mm plywood, joined down the centreline by a glued in 6mm plywood spline.  They join at a slight angle and when the glues gone off I’ll round the top surfaces with a sander.
The bow one gets a little  frame underneath so I can put a cleat on top without risking pulling the breasthook out if the boats bouncing around at anchor or under tow behind the ship.

Fitting all the angles is a pain, don’t you love gap filling glues! 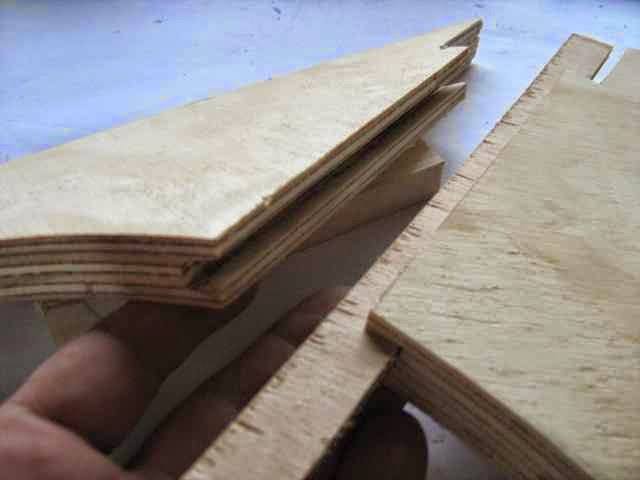 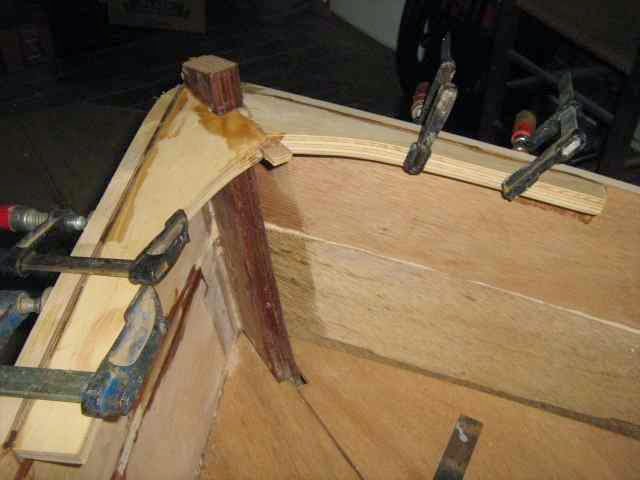