Well, the Boot brothers have been doing a lot of walking, together of course, you’ll rarely find them apart from each other.  I went along with them, it keeps them out of trouble you know.
We’ve been exploring part of Chiloe Island just off the coast south of Puerto Montt which is well south of Valparaiso, one of the more southerly of the major ports here in Chile.
We took the ferry over, perhaps a 30 minute ride on a drive on drive off ferry which was an amazingly slick operation. There were at least a dozen of these ferries working when we were crossing, they carry around 30 vehicles each and  operate across a straight where the tidal streams run at ( guessing here, but not exaggerating) up to 8 knots.  This means that they’re going sideways as much as forwards, and the skippers know where all the major eddies are and work them just the same as a white water canoeist does.

On our travels on Chiloe we found a couple of boatyards and stopped with the camera. No problem with walking around in there, the “boatyard” where these pics were taken is the bank between the road and the waters edge, no more than about 20 metres wide, some very simple roofs on poles, and a few truckloads of roughsawn lumber in stacks.
There are repairs going on, and several new builds, I took pics of the biggest, and one of several small boats in frame, and you’d be amazed at how rough, and how basic these are. “Lofting”? All by eye!
Fitting? Axe and adze, and absolutely no more than just enough to get two pieces of wood close enough to get a bolt through. Those bolts? Hardware store mild steel hot galvanised, no fancy stuff here.

This is how the old square riggers were built, no frills, and way cheaper than the current way of building replicas. The fastest and cheapest path to the water, built under a very simple roof on poles with a monster bandsaw and a thickness planer being the only power tools,  axes and sledgehammers being the preferred tools and muscle being the main prime mover. 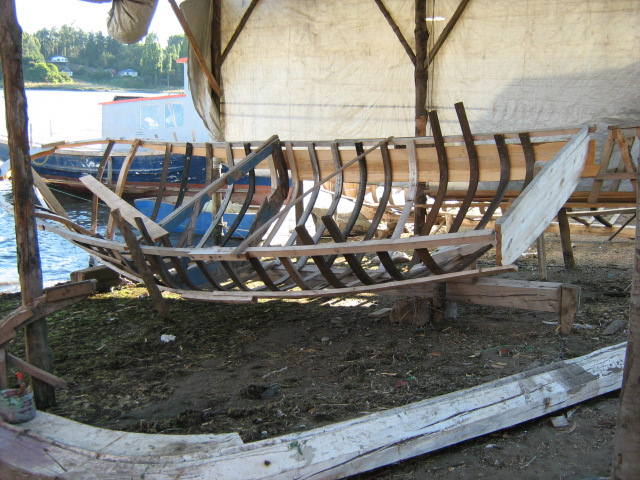 This little ship in build is about 20 ft long, she's partly planked, the frames are bent in using two temporary ribbands between the keel and the gunwale on each side, she's fastened with galvanised nails bent over on the inside. Some of the material appears to have been salvaged from older boats, and that monster piece of wood in the foreground is a stem removed from a much larger boat which has been demolished and saved for another build. 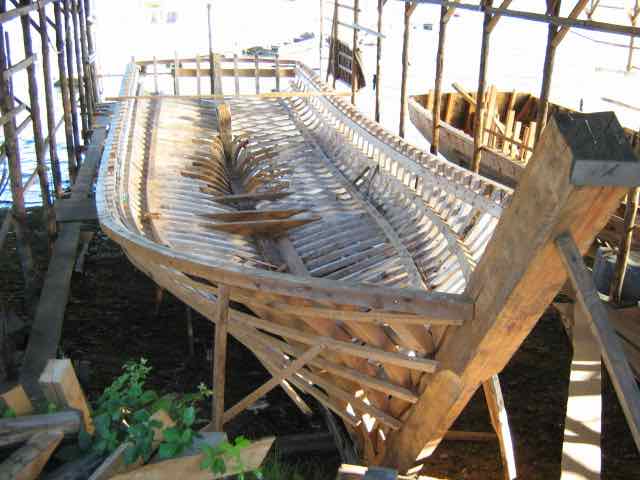 About 70 ft by 18, the stem is more than a foot square, she's of much the same shape  and style as the boats we've seen everywhere along this coast.  Raked stem, very full at deck level, fine on the waterline and strong sheerline. 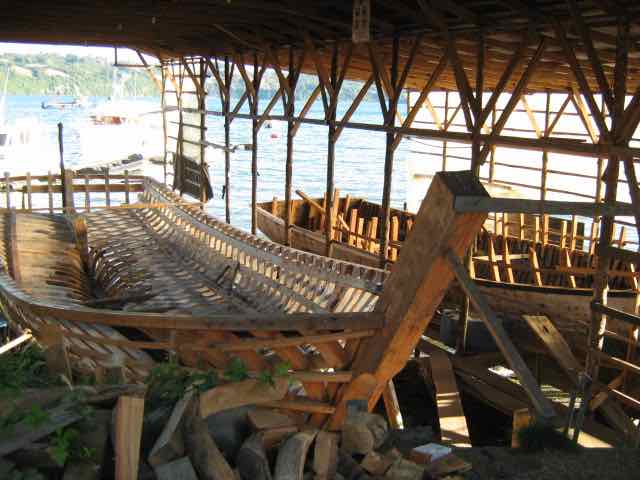 Another view under the roof. There is a second ship in, she's been stripped out, engine and shaft removed and is being reframed. There are new garboards and some more plank replacements in the forefoot area, those planks being about 1 1/2inches thick, and as with all the others fastened with galvanised mild steel nails. 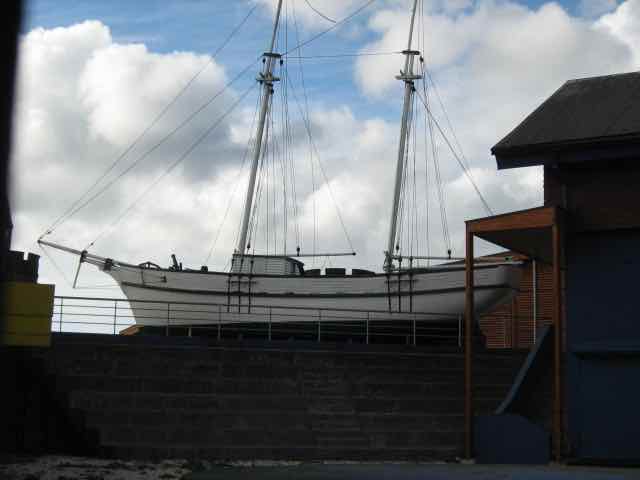 Posted by John Welsford at 3:36 AM