Getting ready to set the frames up on the building jig.

But I have to build that building jig first.  I wrote the text below on Friday evening, went out today between showers and bought the two long pieces and enough for legs and cross pieces for the jig, carried it down the track to the shed and its all ready for me to attack tomorrow.

Heres Fridays maunderings plus some pics, please excuse the shaky hands, I was standing on a very unstable stool trying to get a good angle with the camera.


-----  A big day?  Historic moment? Red letter day?  Hardly any of those but it’s a landmark of some sort in the building of Long Steps,  I’m off in a few minutes to pick up three 6 metre lengths of 138 x 35mm fingerjointed, kiln dried pine. These will become the basis of the building frame and I’m hoping to have the main part of that put together this afternoon.
I’ll get batteries for the laser level while I’m at it, this clever little device saves an awful lot of time. While there are other ways of getting things straight and level having a bright red line exactly on the mark makes it so easy that I cant imagine how I managed before I started using it.

I have all the frames built, there are bits and pieces still  to put on all of them but the main parts are done.  Once the bottom panel is mounted the stem and spine will be set up, B#1 and B#2 fitted, braced straight and level, and I’ll work back from there.

I did though set B#3 and B#4 up in their approximate positions the other day, just to get a feel of the space under the cuddy and am pleased. Its slightly wider and longer than the one on SCAMP, and feels much more roomy.  Nice, there is space for me in there on a rainy day, and I imagine that I can stay dry sitting out a rain shower while hove to, the stove heating up the water for a cup of tea or soup, then the cast iron frying pan on for toast and baked beans.  That’s going to make long passages much less arduous than a purely open boat.

To check each frame I’ve laid them out on the bottom panel, the latter just sitting on three sawhorses so it’s a bit swaybacked. But it does give an idea of the boats size. For a sail and oar boat, its big, roomy, and I expect comfortable.
Here are some pics. She’s going to fill the shop up somewhat.

Onward with the work. 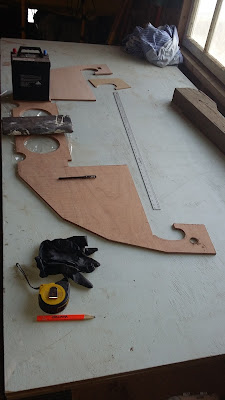 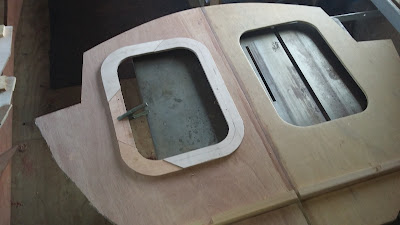 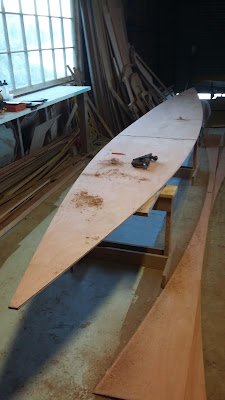 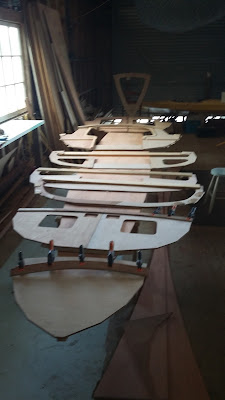 And one serious one.  Roger Barnes is one of the most experiened open boat cruisers anywhere,  has put more miles under the keel of his boat than anyone I know with perhaps the exception of  James McMullen, and he still got caught. In fact James got caught a little while back, so listen well.
Here’s his video telling about the experience of capsize in the open sea. I’ve not put this here to crow abut his getting wet as I’ve done the same a couple of times, but I'm trying to put the case for being prepared for the worst, every time you go out in water more than waist deep!
Be ready, be prepared, safety starts at home when you select which boat you build or buy, then carries on with rigging, preparation and storage, all that before you even think about what the weather will be like on the day. It’s a long list. There is much to think about and do before you go near the water.
Remember, unlike your car, you cant just open the door and walk home.
Thanks Roger for making this video and posting it. It  could save someones life.
The rest of you,  take heed!

Posted by John Welsford at 4:12 AM