Long Steps stem and frames are being stood up, the shape is starting to be evident.

The shape is beginning to appear!

So far the shape that was in my minds eye, developed by appplication of theory of hydrodynamics and such, modified by analysis of stress paths and loadings was not visible to anyone other than myself.  The drawings say some of it, but its not the same as standing alongside the real thing.

But today, I’ve the building frame there,  all straight and square  thanks to the laser level,  the bottom panel scarfed up and cut to shape and fastened down in its gentle fore and aft curve.  The stem and the spine that  runs back to B#4 is glued  and screwed down and the bulkheads / frames are slotting over it.

To my prejudiced eye the shape of the boat is beginning to emerge, I can see in my mind the continuation of the sheer line, I can feel the space inside under the foredeck and in the big cabin/locker  and am very much looking forward to getting the next bulkhead up so I can get in there and sit under where the cuddy roof  will be.
It’s the same as the builder who, once the shell of the boat is done, sits in there holding a broom handle over the transom with a faraway look on their face.  I’m the same, the imagination keeps the dream alive and the motivation going.

What you’re seeing here is the bottom panel, the stem and spine set up on it and
B#1 and B#2  in place.  Note how they’re braced, the assembly has to be really rigid as there will be some real stress on them when the stringers are wrapped around.
When installing them I’ve checked for square across and vertical, level across, and braced the stem and B#2, then used the foredeck king plank to locate B#1.

In the next few days there I’ll be fitting the hatch opening doublers to the starboard hatch opening on B#3, routing the groove for the sealing gasket, and mounting that and B#4 on the frame. B#5,  B#6 and 7 will go in next, the starboard side in the seat front area will later on be cut away to take the “offcenterboard case” but for now the priority is to get all of the framing done, the lowest and highest stringers in, and get it all fair.
This is the fun part of the build, watching the boat take shape. 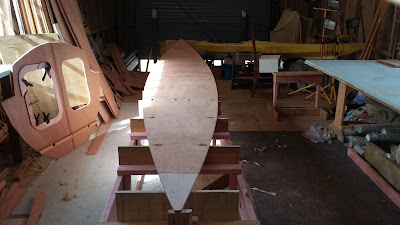 View from the bow, just the bottom panel screwed down to the building frame. Thats B#3 on the left with part of the hatch opening doublers ready to be glued up.
Yes the shop is a bit untidy, there is usually a cleanup every night before lockup, but I missed last nights sweep and put away, so its double penance tonight. 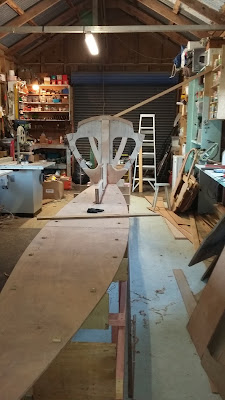 From the stern end with the stem and spine, B#1 and B#2 in place, glue still to come. 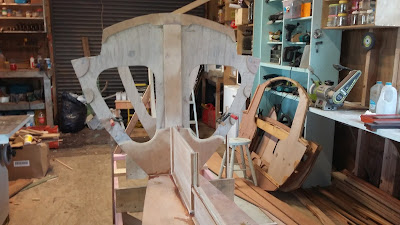 Closer view, thats B#4 on the right with 5, 6 and 7 stacked behind it. The vertical strip on the back of B#2 is part of the mainmast box which steps on top of that deep web in the spine.
The little semicircles on the edges of the frame are stringer intersection doublers which make it easier to put screws through the stringers and into the edges of the frames. 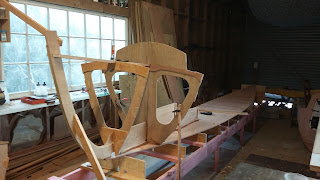 View from forward. There will be more bracing put on as I progress aft erecting frames, in the meantime B#1 is held in position by being slotted over the spine and having the foredeck king plank laid in its cutouts.
The light coming in under the door in the end of the shed is, by the way, a reflection from the water in the river. To launch this boat when finished I'll be able to just open the door and slide her out. I was very lucky to find this place. 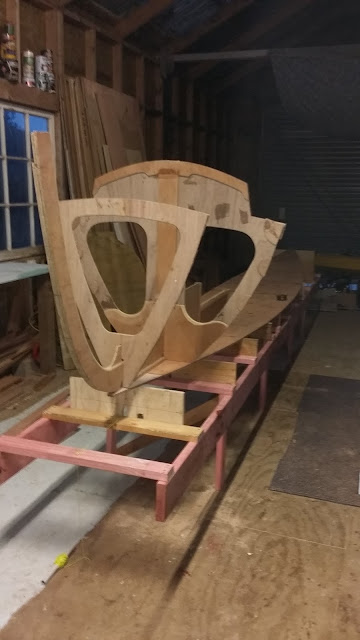 Dry fit before gluing up, they needed to be braced, leveled and squared but it was so exciting to see that I just had to get the camera out.