I've been out having little adventures.

Last week I took the ship out up to Kawau Island, about 2 hours away by sea, visited friends their then went to meet up with the beginning of the Kiwi Raid at Sandspit.
I was the “baggage barge” for the first day, baggage including camping gear for about 30 people was a good sized cargo but there is plenty of space in the covered cockpit aft so apart from needing four loads in the inflatable to get it all ashore at Martins Bay where they were to spend 3 nights at the motor camp while exploring the river at Mahurangi and the islands in the area, it was no problem at all.
I had the pleasure of the company of Roz for a couple of days, she is the organiser behind the Taweh Nugganah raid in Tasmania, those people being the bulk of the participants in our raid here.  Nice to meet you Roz, thanks for the pleasant time, you’re a great “deckhand”.

Raid progress reports here, I wish I could have stayed longer,  next year!
http://nzcoastalrowing.org/page/2/
More Kiwi participants too, this is a fabulous event, well organised, well supported with escort boats, the campsites all arranged, food provided, well done all the organising team.

From there, it was Mahurangi Regatta time, the annual event for classic yachts held in the entrance of the Mahurangi River,  there are usually between 250 and 300 boats there and while I’m primarily interested in the small boats, and admit to being biased and wanting pics of some my own designs, this is a fabulous event and one that I hate missing.

This time, with the aid of Denny on the helm I was able to get around the fleet, hopefully not inconveniencing any of the racers, and got some very good shots. 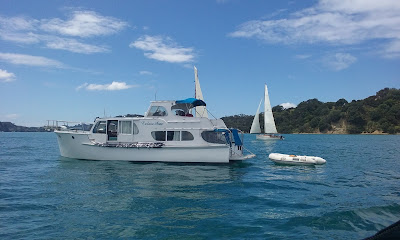 Waiting near the beach, this is Carlotta Ann, soon to be renamed Kairos, I dont have any connection to the original name and she was an opportunity not to be missed.  She's my most of the time home, big, comfortable and capable. I still have five other boats two of them with sails so I've not defected from the small boat fold. 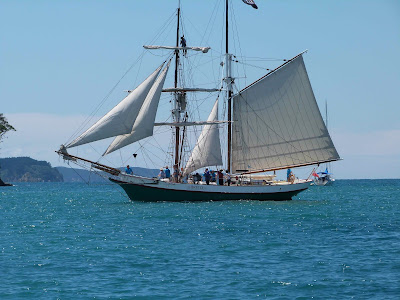 Breeze, 65 ft on deck, operated by an Auckland Maritime Museum volunteer group, a lovely sight at the Mahurangi Regatta, she sails the course with all of the racers and adds much to the spectacle. Yes I've been up on that yard, while she's not a big ship its still a long way down. 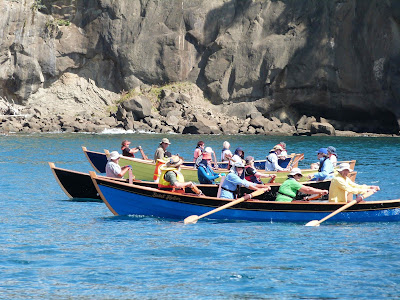 Four of the St Ayles skiffs from the raid, all Tasmanian crews. Thanks for coming over people, great to meet you. 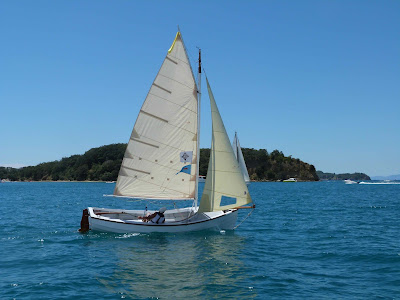 A sloop rigged Pathfinder,   http://www.jwboatdesigns.co.nz/plans/pathfinder/index.htm
At this stage of the race  lying second to a boat that has won the event multiple times, local knowledge makes a huge difference on this course. 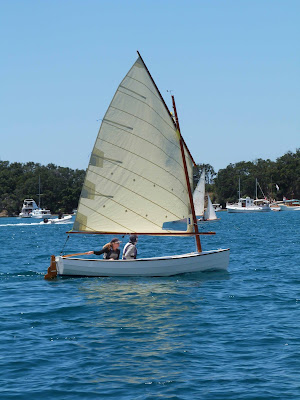 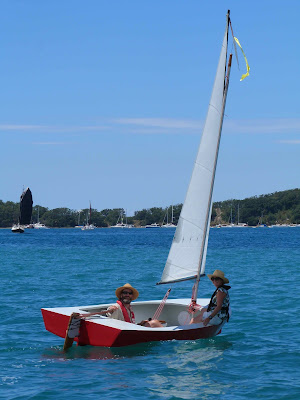 Saturday Night Special, designed to be a really quick and easy build for events such as the Texas 200, while not at her best in the very light winds ( the T200 is a notoriously windy event, there is an alternative larger sail area rig) she more than held her own among a fleet of very competitive small racers.   http://www.duckworksbbs.com/plans/jw/sns/index.htm

No excuses for just chasing pics of my own designs, the opportunity does not come up very often so I take it where it happens.  But I've more pics and will post again.

We took the ship up the river to Warkworth, the town at the head of the navigable part of the river, being a midday tide and a holiday weekend, plus the Raid boats were up there with John Dory their escort,  it was way too crowded and no space at the dock so I managed to turn us around in the smallest space imaginable without touching anyone else, a maneuver that I was very proud of, tied up at the kayak jetty ( not being used at the time) for an hour then headed back out.

Perfect weather, light winds, just enough to move the boats, sunny and calm, itrs a lovely venue and ideal for boatwatchers, birdwatchers as well, there was a big flock of Fluttering Shearwaters resting just off the point as we came in.

I’m back at my home dock now, have a few jobs to do before I catch the bus into the airport and fly across the Pacific to Santiago to meet up with Howard Rice to help prepare the way for his planned Southern Ocean adventure with his SCAMP.
Check it out here.   http://www.below40south.com
The fundraiser is to make a movie so everyone can share the adventure. The cameras are organised, the filming planned, it’s the production costs that we need to cover, even ten dollars will help.  Please.

I’ve not been to Chile before, New Zealand has strong trade ties with that country and quite a few Chileans live here, but this is a first on that continent for me.
I’m very much looking forward to it.

Watch this space for reports.