More maintenance on the trailer.

Wheel bearings.
Vital, and often problematic on a trailer that has to be dunked in the water when launching and retrieving a boat.  Heavily loaded, dunked into the water when the wheel has been run for miles and is warm, often poorly maintained, and frequently undersized or poorly specified for the weight of the load trailer wheel bearings are an item that need to be inspected regularly.
I had a very slow leak in the left side tyre, it was gradually going flat, taking its time about it but definitely not ready for the next trip out.  So up on the jack, under went the blocks, off with the wheel and away to the local service station for a fix and some new air.
It had a woodscrew through it, not a stainless one which suggests that it was not one of mine but a nuisance nevertheless.
But while it was off, I gave the hub a spin and it felt very tight, would not spin without some force applied.  I had been touching it at each stop and at our destination to see if it was running hot and it was ok in that respect, so there was some detective work required.
First step.  Drop that side back on the blocks I’d put under for safety, and lifted the other wheel to see if that spun freely.  Yup, gentle spin and it ran for four or five turns so there was a difference.
The hubs on this are good ones, solid, very well fitted end caps, and when the one I was investigating came off it exposed a substantial stub with castellated nut to retain the hub and bearings.
The grease appeared fine, none of the cloudiness typical of water contamination, so out came the split pin and off came the nut, a gentle tug and the inner race came out.  Taper rollers!  Serious bearings!  Open ones though and no seals. No sign of any damage, the races were not pitted, the rollers all in good order and the hub was till stiff to rotate.
Pull, deep breath and PULL! And off came the hub, the rear/ inner bearing looked fine, no sign of any problem, so it was time for a head scratch.
Hmmmm?  I wonder, the triple lip seal at the back looked totally dry. Just the inner lip had any grease, none on the outer two.  Push the hub in and out, the seal was a very tight fit into its groove in the back of the hub.  Very tight, too tight!  I went around the other side and got in behind the wheel with a mirror, yes there were signs that there was grease on the seal there, so went back and assembled the one I’d been working on.
A tiny smear of marine grease, just a faint wipe, and gently reassemble it. You would not believe the difference!
With the wheel on, it spun for the same 4 or 5 turns, victory! 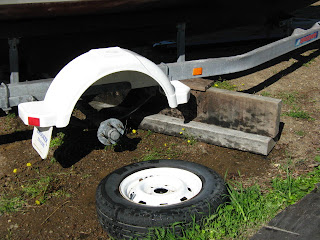 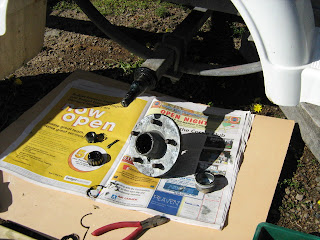 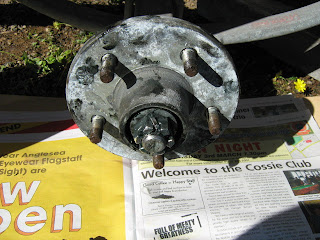 Thoughts, taper rollers are good, but I’d prefer to see seals on the races so I’ll take the  hubs to bits during the winter maintenance and will see if there are double sealed ball races that will take an end load in that size,  whatever the result of my enquiries I’ll buy a set to carry in the boats spares, and will also buy a fistful of the right sized split pins so I can put a new one in every time rather than rely on one that’s been bent and straightened several times.  I’ll need to carry some  grease, there is a brand of Vitamin C fizzy drink tabs in our pantry, and I’ll grab the tube container when they are all gone as its about the right size and has a good solid screw cap.
Add to the boats tools, a brass drift to drive the bearing inner and outer races out and to refit new ones, doing this job on the side of the road is bad enough but its way harder if you have to use improvised tools.
On a more positive note, on Monday Denny and I went over to Te Awamutu about 40 km away, and after doing the business we’d gone there for drove down to Lake Ngaroto to show her what the place was like and to take the dog for a walk. She was impressed and we’ll take the little boat over there in a week or so for a sail and an overnight stay .  Its not big, but its very quiet and sheltered, will make a nice place to spend a night tucked up in the reeds among the birds that this conservation project was engendered to protect and foster.
My next project?  Realign the bunks and rollers on the trailer.  I’ve been pouring a mix of oil and kerosene on the nuts and bolts so hope that these come undone without too much force.
JohnW
Posted by John Welsford at 5:56 PM 1 comment: