I’ve been playing with the rig, the sails, and the settings on Spook, each little change has seen a slight improvement in her windward performance, and those little changes add up to a quite noticeable boost in both pointing angle and speed, particularly upwind.
I’m at a stage where she’s very competitive against boats with “modern” rigs upwind, and can blow past a lot of them downwind, that latter being due in part to the fact that she carries a lot more sail than most of them.

But she feels, especially in light weather, as though she could carry a bit more sail, she’s got a lot of ballast, and with the carbon fibre mast and gaff I’ve built having much reduced the weight aloft, more sail is a real possibility.
Her new mainsail is setting well, its about another 15 sq ft in area compared with the old one, but still, I think she’ll handle more.

Her jib is quite small, has a hook in the leach which Dennis the sailmaker has not been able to cure, the fabric is a bit too stretched so we’ve been discussing the cut and shape of a new jib.
But to experiment a bit, I asked on line if anyone had a second hand Flying Dutchman genoa that they’d let go cheap, and I got one ( thanks John).
Its light so will be a light weather only sail, will need hanks  but I think that otherwise it might go straight on.
Its longer in the luff but I’ve length to spare up the forestay, longer in the foot and leach so the clew comes down to where I want it, I’ll have to put new jib sheet blocks on but that’s ok, I can leave the old ones in place and use the old jib when it blows up a bit.

The idea here is that with the help of Conway sails and covers, ( that’s Dennis the sailmaker, good guy) I can experiment with the bigger lighter, and very cheap sail until I know what the boat likes then design and have Dennis build one in slightly heavier cloth that will do the job.

So whats brought all this on?  Well, when I got Spook, nee “May”, a name I felt didn’t suit the tough and capable little ship, she didn’t handle well and felt as though there was a lot of performance still to come.  I’ve been working on that for a while, built a new mast and gaff, ( took 14 kg, that’s over 30 lbs) out of the rig high up which made a noticeable difference to her stability) had a new mainsail built, put more ballast inside to help the near half ton of lead in her keel, chenged her fore and aft trim, reshaped the foil section on her daggerboard, moved the jib sheeting points around a bit, and a few other things.

A month or so ago I raced her in the small boat class at the Mahurangi Regatta, and she’s getting close to competitive. I came in third by about the length of the bowsprit after getting into a tacking duel on the finish line, the long keeled heavy boat being at a real disadvantage in that game I lost that second to the boat that had won the previous and several other years.
That boat by the way was one of my Pathfinder designs, and the winner was sailing one of my Navigator designs so, even though I was third, in a way I was also first and second which was a buzz.

In light weather she does a horizon job on most boats of her size, all that sail area helps, she self steers on quite a wide range of courses, and its not uncommon for me to sit reading a book while she trucks along, but, but, but, its hard to stop fiddling.

Why am I putting so much effort into a boat not of my own design? One, its hard to see that there is some improvement possible and not try to achieve that, and the other, is that everything I learn here is directly applicable to my design work.

So, back to the new jib, here’s a pic of the old sail laid out over the new ( to me) one.  The clew being lower and further aft will enable me to position the sheet leads to control the leach tension and sail twist better, with that in place I’ll be using the mainsheet traveller more to control the slot between the two sails, and with the increase in sail area plus better control of sail shape and trim .  I’m hoping for another little gain. They add up. 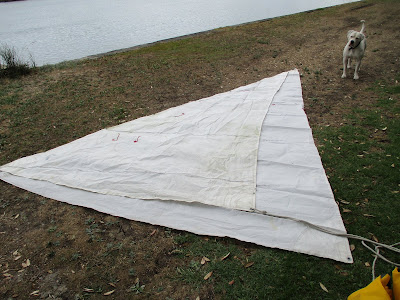 The big white dog is not mine, he's a friendly thing that comes over from next door.  My little terrier has him pretty much under control though.
You can see the difference in sail size, its going to be interesting to see how the boat feels with this bigger jib up there, she may require a little change in her ballast, certainly a different sheeting position for the jib sheets.  More to play with, lots of interesting things to try. 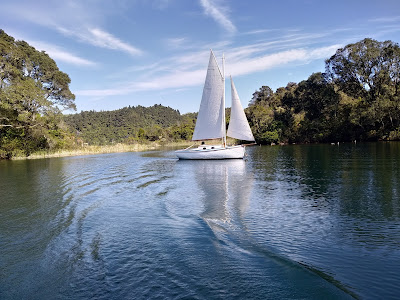 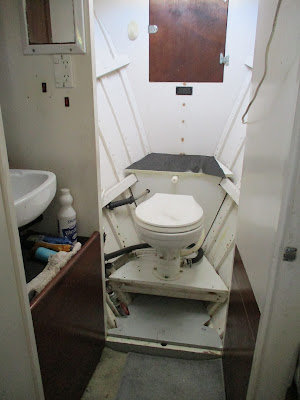