Boatbuilding, and indeed drawing boats is a part time thing here in my world. The days are just not long enough, or there are too few of them or something, the things to do don’t seem to fit in the space available.
But todays a good day, springtime is here, birdsong, warm sun, flowers, fresh pale green growth on the trees and those that lose their clothes in the winter are budding.
I’ve the day off other things, and it’s a Long Steps building day interspersed with some drawing on another project. Perfect!

So its going to be the mizzen mast step box, all the components have been dry fitted, coated with resin and sanded off, and I can, after I chop the socket in the bottom step and the partner hole in the top, fit it all together.
I’ll also start the process of fiberglassing the offcenterboard, its all shaped up and waiting, the hardwood tip and leading edge will get two layers and the rest just one of 6 oz . I’m not going to even try to wrap the glass around the trailing edge, I want to keep that square across, about 4mm wide and the cloth wont go around that sharp corner. 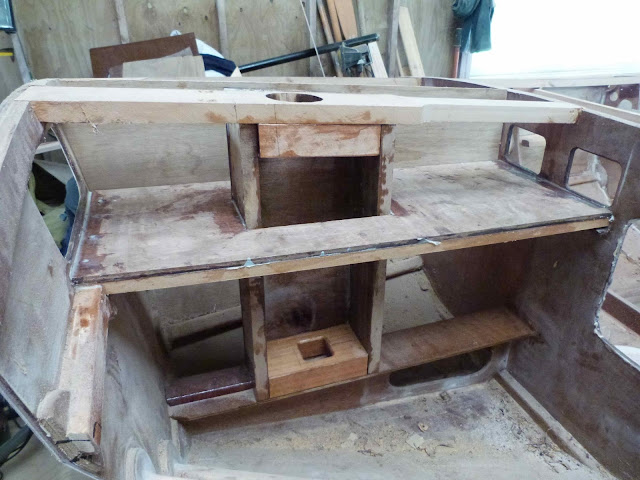 The mizzen mast step, I've left the near side panel for both the step box and the tiller line tunnel off so the structure is visible for viewers, those bits go on next. Note that the angle of the mizzen mast is slightly more upright than the plans will show, I'm going to use a rather larger area rig than I'd usually recommend, I'll need to reef early but she'll be a flyer in light weather  which will help with progress in mixed conditions.
The tiller will pivot on a pin mounted on the forward side of the bulkhead on the right of the pic, that pin will have the same slope as the transom and rudder, and will have a yoke which matches the one on the head of the rudder so I can use solid rods rather than cables.
I'm planning to get a couple of rigging screws, cut them in half across the body and put a section of stainless rod in there to make adjustable rods with slotted ends.

The glue around the edge of the hatch opening is primer for putting the cutout piece back in, I've come across a pair of nice round hatches that seem a better idea so I need to fill the holes and cut new ones to suit. There is quite a lot of "do as I say not as I do" in this boat, I like to experiment.

SEI has been used a lot over the past year or so, mainly as a rowing boat here on the river, picking up trash that would otherwise wash out to sea and keeping me fit. Three one hour rows a week has moved some of my belly up to my chest and added a little to my biceps, and these days the dog watches intently as I walk up to the shed.  If I come out with his lead he’s off up to the truck, if it’s the oars he’s sitting in the little boat by the time I get there. Right now though he’s asleep in a patch of sunlight that’s shining through the window.  It’s a dogs life!

I need to get on and check the last of SEI’s plans for the corrections that John Owens in Texas kindly sent me, I like to have someone test a new set of plans for me for each new design and he built one with the aim of making kits available.
I’ve sailed her quite a bit, she’s a good performer, well balanced, very capable in a blow and moves well in light weather too, her RSS sail ( the OZ Racer one  http://www.duckworksbbs.com/category-s/376.htm  ) is great, sets and performs beautifully and can be used instead of the one I drew, and I’m very pleased.
One of the aims of the design was to provide enough stability to make her both sail well and easy to move around in, I find I can jump into her off the dock and walk about in her, lean over the side and drag rubbish aboard, I’ve a friend who has both limited mobility and poor balance and she is able to climb aboard without too much risk of going for an unscheduled swim.
So SEI, the next set of plans to be released is a good un.

I’d best get on with the work up in the shed though, the job wont get done unless I’m in there and doing it.

Posted by John Welsford at 2:18 PM No comments:

Long Steps, other builders and a small victory.

Long Steps is making progress,  or I am with the build or somesuch. I’ve two planks to fit on the starboard side, leaving those two off while fitting the ‘offcentrecase” was a good trick,  made it much easier to get in there and push it into place.
I’ve done the pivot bearing cap on the waterballast tank side of the case, taped the case sides to the bottom panel and garboard plank, and done a whole lot of coating on the inside of the boat, three coats is whats recommended but gosh it takes a while to get done. Sigh, have to do it though, there are parts of this boat that are in places that will be impossible to get at later on.

While I’ve been distracted with other things Phil McCowin and Howard Rice are putting a Long Steps together for Phil, Howard taking a break from the Voyage of Southern Cross project  ( Here’s the link) https://www.voysc.com/ to help Phil out.  That’s put the pressure on here, I’d not done much at the drawing board for a while, other things having to take precedence, so I’ve spent the last week working to stay ahead of them.  The other two builders will be getting those drawings as soon as I’ve had feedback from Phil as to corrections and errors, and there are aways one or three.

So I’m pushing on, have drawn out the case and ‘board, the mast boxes and the plank shapes.  One of the things that will be evident to Howard and Phil, Howard having assisted with or built around  70 SCAMPs and Phil having built his own one, is that this boat is built like a battleship in comparison.

When designing I work out the stress paths,  hogging, wracking, rigging and such, and make an estimate of the forces involved.  SCAMP is 11ft 11in, that’s near enough 3.60 metres in my own language, but this is 19ft, has twice the ballast of its smaller relative, and will be carrying a lot more sail plus will be moving much faster at times, all of which will about double the stresses that the structure has to cope with.

My own planned voyage being one that will take me well out to sea, I prefer to have the boat slightly overbuilt rather than find out on a dark and stormy night that I should have used slightly thicker material or more glue.  So she’s designed tough, light by the standards of most boats of her length but tough all the same.

Howard and Phil are making famous progress with Phils boat, and Phil has been kind enough to send me some pics. This is toward the end of week one of the build,  two guys working pretty much full time though, but its impressive all the same. I’m doing several hours each day trying to stay ahead with the drawings. 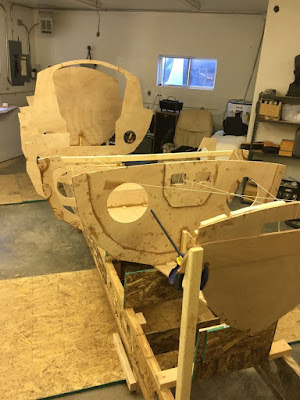 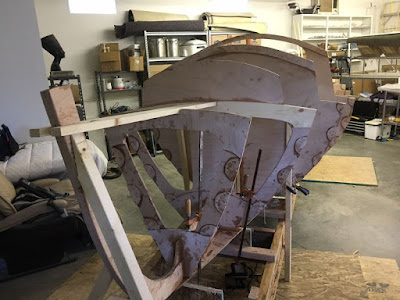 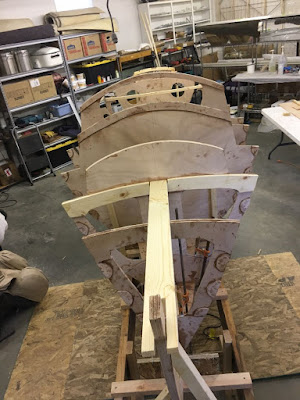 Here's where they're at.  Photos by Phil, don't you love the clean and tidy workshop!

I still have distractions though,  to help the monthly bills I do some specialised engineering work, on site maintenance and repair of woodworking machinery, it’s a field that I know my way around and enjoy, most of the people I see while working are very glad to see me as their machinery will be running not long after I roll in the door, but occasionally I come across some really funny things.
Last Thursday I was called to a company with a heavy duty 200mm jointer,  one with long tables and a heavy duty fence, probably 200 kg or so ( 440 lbs).  They’d had a bearing issue, contacted an opposition company who sent a technician out, ( about $200 just for that) he’d told the client to get it to his workshop ( I do bearing replacement for those on the job, no big deal) which added to the cost, the job was done and the machine was returned, having to hire a fork truck to load on the way out and unload on the way back added to the bill.

It vibrated, it shook so badly that it literally walked around the workshop!

After seeing the bill, close to $1000 in total, the client was bitching at the company rep for the outfit that I contract to, and he said “phone John”.

I was there a day later,  listened to the complaints, fired it up and sure enough, it was unusable.

Out came the stethoscope, listened to the bearings, they’re ok.  The drive motor was ok, but there was a low frequency rumble in there that was much slower than the cutter rotation or the electric motor rotation.  The only other moving parts in that machine are the drive belts and the low frequency noise was about what I'd expect from the time it took for the belts to rotate so off they came, all three from the triple groove pulleys.
Bingo, they immediately took up a long oval shape, and all three had been on the pulleys in exactly the same place relative to the ends of the ovals. They'd most likely been cramped up tight in some form of packaging for a very long time and taken a "set", two flats and two sharp corners instead of a smooth circle.
The belts were marked to show where the distortions were, went into a sink full of hot water for 20 minutes, were fitted with the marks evenly distributed and the machine fired up again. Smoooooth!
The customer was super pleased, I’ve been asked to go back every few months to do a service run on all of his plant.
I was super pleased, that was fun.

Mind you, I don’t know what I’d have done if it hadn't worked.

Tomorrow I’m off to town to learn how to post videos on YouTube ( thank you in anticipation Paul) , then  go to Haddons house to help lift his brand new almost ready to launch Pathfinder out of the shed and onto his trailer.  There are steps in the way which will make it interesting, but I’m hoping that we can combine the new knowledge of how to use the video camera, how to post on YouTube with the moving of the boat to provide you with some entertainment.

Back in a day or two.

John
Posted by John Welsford at 1:56 AM 3 comments: