Its past time to put up more posts here, I’ve been a bit preoccupied of late, yes its happened before and will probably happen again.
But Howard Rice’s adventure is coming up, Denny and I will be heading out on the big silver bird to meet up with him in Chile,  ( many thanks to those who have contributed to the Video Fund, some of that is helping us to get the “footage in the can” and travel is a large part of that). That comes up in 14 days time so we’re beginning to select our baggage items, and that time will flash past.
Yes I promise to post about the trip here and probably on Facebook.

I’ve been an “engineer” more than a boatbuilder or designer of late, we’ll be away for a month and I need to be completely up to date on that before we fly out so its been a busy time. Boatbuilding has been happening though and I’ll get some pix for you in a few minutes when my cameras batteries charge up a bit, the ones I took before I started writing here were almost black and I got puzzled about it until the screen flashed up the “charger needed” indicator, so they’ll happen soon.

In the meantime I’ve been away for a short cruise in SEI.

Of course its springtime here, a time of blustery winds and very changeable weather but also a time when there is some real warmth in the sun, when the water changes from deep dark green to sparkling blue, and the horizon seems not to be so far away that its out of reach.

Five of us set sail from Sandspit, about an hour or a little more north of Auckland central.  Far enough away from the madding crowds to be a peaceful place.  We were heading for Kawau Island, once the seat of Governor Grey, the Queens representative here in the early days.
He had a home built there, the “Mansion” of Mansion House Bay, and imported quite a few exotic trees and animals, Wallabys ( like minature Kangaroos) and Kookaburras with their call that sounds like maniacle laughter amond them.
With the growing population of native birds such as Tui, Bellbirds and Weka among the rapidly improving forest cover it makes for a subtropical near paradise.
Being around 25 miles north of the several city marinas its two sheltered harbours are a very popular cruising destination , but this early in the season it was not at all crowded. 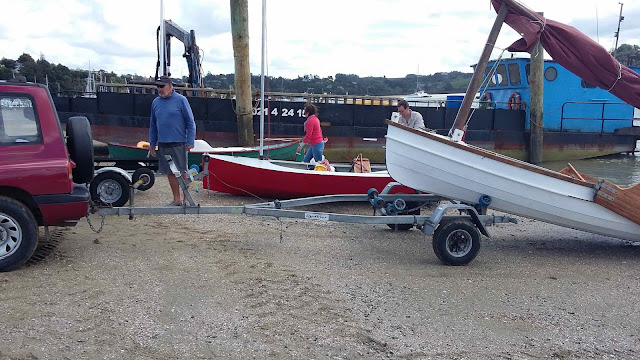 Launching at Sandspit, it was blowing quite hard so being in the lee of the barge was good, some shelter helped us get rigged and away with fewer hassles.  Rogue being unloaded from her trailer, SNS behind and SEI almost up against the barge. While sandy this boatramp is quite a good place to launch except at high tide when there is no space between the water and the seawall. There is a secure carpark nearby, you pay but its better than risking the vehicle or trailer.

Our sail across was brisk, I’d not had SEI out on a breezy day in open water before, she’d been my workhorse under oars for picking up trash in the estuary where I live, suffering many scrapes and dings and the indignity of being dragged over oyster beds and up on to a cement dock so she looks a little older than her true age.
But that crossing, about 6 miles or so across a quite open bay in a solid force five over the stern quarter, that’s 18 to 21 knots of wind, was really good fun.  Blair in his Saturday Night Special and I were just about even. A gust would set him surfing and a couple of boatlengths ahead, then I’d catch one and pull level. In general there is not much between the two boats, he’s a little faster in strong winds, and SEI is a tiny bit faster in less wind.

We pulled into Squadron Bay in Bon Accord Harbour, and loafed around for a while, then, as it was getting on in the afternoon and SEI not being set up to sleep aboard I headed on back out, tacking up the narrow harbour against an increasing breeze, around into North Cove where my friends house is.  I’d arranged to stay there overnight, and the tides meant that I was able to row right up to his jetty in the morning or evening.

It was a great sail, the short steep chop a good test for SEI’s shape which I’d drawn specifically to cope with that sort of thing, she doesn’t pitch much, is stable and with a single reef made great progress upwind , tacking reliably, and pointing well.
It was exhilarating sailing, a little spray coming aboard but nothing major, and I was soon clear of the point and around into North Cove.

I rowed the last bit up to the jetty, the winds swirling around behind the point made sailing a bit of a lottery so down came the sail and out with the oars, she rows well and the rig stows low along the port side of the boat so it doesn’t obstruct the rower.

Had a nice evening with Bill, but next morning I sailed out to the entrance of the cove to find that the water outside was a mass of whitecaps. Yes, I’m chicken,  self preservation is high on my list of priorities so I turned tail and went back to the jetty, spending the day pulling mangrove seedlings beside his dock and then helping to repair his water pump.  While it wasn’t quite what I’d gone there for it was good to be able to help, and he’s good company.

Sunday morning though was a lot better, still fresh but not excessive, the sun was shining and the forecast was for the wind to swing south and moderate so out we went, SEI and I, and were soon around to Harris Bay where the group were anchored in mirror calm waters.
They’d had a great time doing very little, a venture up to Mansion House bay had occupied them the day before, and all had been comfortable overnight.

It was decided that we’d go across to the Kawau Yacht Club and have a late breakfast, met the very hospitable crew there and had a breakfast that, in the words of Arlo Guthrie,  “couldn’t be beat”. Remember Alice? She wasn’t there.

From there we had a nice sail in somewhat tricky winds around to Mansion House Bay where Barbara Bates from Pathfinder “Varuna” treated us to a very good lunch, and we hand fed a couple of Peacocks while sitting in the sun.
Being as we were all of us due home that night we headed out back toward Sandspit early in the  afternoon, and had a very good sail back in about 15 knots of wind, again over the stern quarter and again with Blair and I there was nothing in it for speed, our impromptu contest ending about as level as it could be. 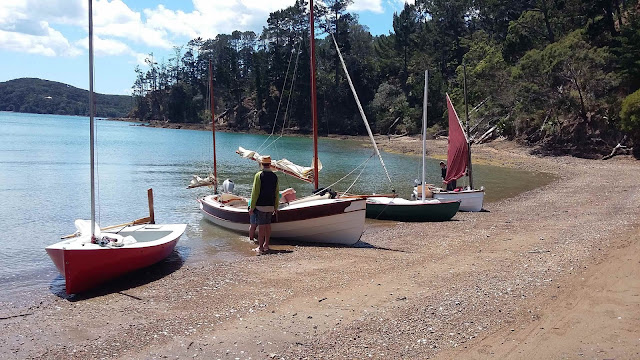 Here we are at Mansion House Bay, Paul in his Whiting 16 was out in the bay being the good samaritan towing a couple of younger folk in a dinghy back to their base. This is a truly lovely spot.  The boats are, left to right,  Blairs Saturday Night Special, Margaret and Frank Bate's "Pathfinder" My SEI" and Colleen and Charles Popes Rogue.

I might have had half a nose in front at the end, but then, so might he, depends upon where you were standing to judge it. Check the video taken by Paul Mullings, he’d left quite a bit before the rest of us and was standing on the jetty as we came in. Thanks Paul.

It was a great weekend, and we’re all of us looking forward to the next one.  At this stage, we’re thinking of a day sailing meeting on Lake Pupuke in March, all of us seem to have busy summers ahead of us so we’re planning well ahead.
Join us, you’d be welcome, we’re mostly bigger dinghies and open cruisers but all are welcome.

Watch this space for details.

Boatbuilding, the frame of  Long Steps is all complete, apart from the offcentrecase and needing to glue up the tiller line tunnel and the mizzen mast step. That latter can wait until I’ve a better idea as to what I’ll use as a mast, probably carbon fibre but there are budgetary considerations so it could be spruce.
I have the lower planks cut out, the inside of the forward sections of them fiberglassed, and the port side one glued in place. The fiberglass? A layer of 6 oz boat cloth each side close to doubles the impact strength of the 6mm meranti plywood, I’ll be glassing the outside when the boats all planked up. 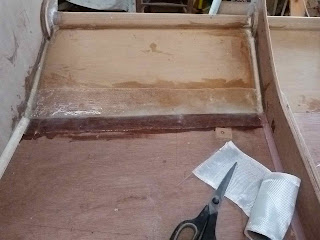 Taping a section of the join between the bottom panel and the lowest plank.  Thats 150 gr x 100mm tape, and its been set wet on wet over a glue mix fillet, the area will be covered with 150 gr fiberglass cloth as well, inside and out.

This boat may well need to be be dragged up a surf beach, all rocks and pebbles so I’m making the lower part of the hull as tough as I can. 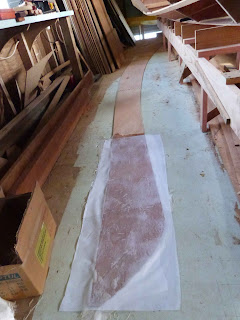 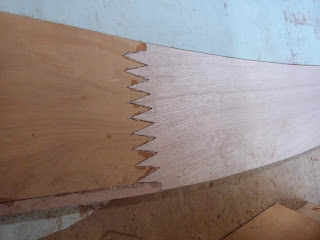 The joins in the planks would normally be scarfed but as I was making the planks up "on the boat" this is easier, the plans will have a full scale drawing of the template, with glass inside and out this is plenty strong enough for the job. 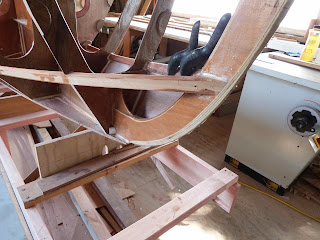 No problem bevelling the stem, 2 minutes with a 100mm angle grinder with a 40 grit sanding disk on it, the eyecrometer was used to get the bevel right.  Epoxy glue is marvellous at filling gaps, just as well.

The seam from lowest plank to bottom panel will also be glass taped each side, more insurance against rough handling and the first tapes are in place.

Note on the pics of the plank being glassed I’ve a white fabric over the glassed area.  That’s what we call “Parka nylon”, a slightly porous very finely woven material that many light shower proof jackets ( parkas) are made of, and you can tell because they don’t keep the water out very effectively.
If you are choosing cloth for this, you should just be able to suck air through it, that makes squeegeeing bubbles out much easier.
I use this stuff instead of “Peel Ply” which is a cloth specifically produced for use when fiberglassing, when squeegeed on over the resin it leaves a much nicer finish than just leaving it, easier to sand smooth and get a base over which to paint. It tends to reduce any “bloom” as well.
This was my first time using parka nylon , it’s a fraction of the cost, and so far it seems to work well. Worth the experiment! 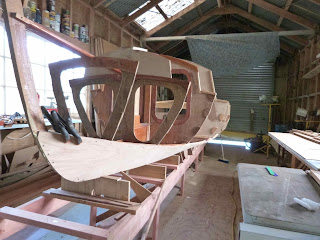 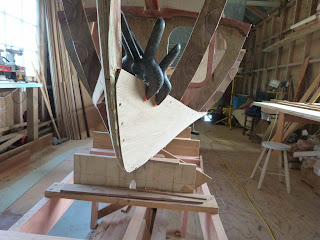 The entry angle of the bow is very fine, she's actually quite slim down on the waterline, don't forget that she's intended for both sail and oar.