Springtime, it brings hope and opportunity here on the river.

Blog for 6 Dec. So, in theory at least its the 6th day of summer here, but the weather is its normal unsettled self for this time of year, warmer than usual so at times the weather is more extreme.

Its odd, when you’ve not been working in the shop for a while, the place gets really untidy, tools get hidden under things, other things aren't in the places where they should be, the floor looks as though its never seen a broom, and you can't walk from one end to the other without tripping over stuff.
It has to be gremlins, sneaky little buggers,  I’d never leave the place like that.

I’ve had more than a few distractions of late, a combination of things together with more rain than usual meant that “the summer of the paintbrush” didn’t happen last year, that plus other maintenance issues on the old ship meant that I wasn’t gaining on it.  Rot pockets, several of them, one pretty big, had to be dug out and new wood grafted in, sanded flush and new paint applied.  Every time I thought I had it all done, I found another one. I think I’ve one to go, but with a 45 year old boat that had been pretty neglected for a long time, there might well be more.

But I’ve been doing small jobs as time and other issues allow, and there are little patches starting to look ok.  I’ve redone almost all of the interior varnish, that’s easy, it can be done in small sections, a light sand, 5 coats of satin finish oil based varnish applied with a sponge brush and she’s looking ok inside.

I’ve done some woodwork in there as well, plus replaced a couple of plywood panels, they don’t match but what the hell, they’re there and do the job.

But it’s the outside that really needs the work, plus  the paint in the inside of the flying bridge upstairs is in really bad shape.  So I’ve started on that, done the control console, rewired the anchor and steaming light which  is now on the new light mast that I’ve built. I was, if not doing the big jobs, getting small ones done, that mast being one. Also managed to get the port and starboard navigation lights working again, the wiring on this old girl is a real mares nest and I’ve been gradually rewiring sections of it . That’s not an area of expertise that I’m familiar with, but each time I do a bit I learn some more.

So, now I’m legal when motoring at night or at anchor away from my dock . 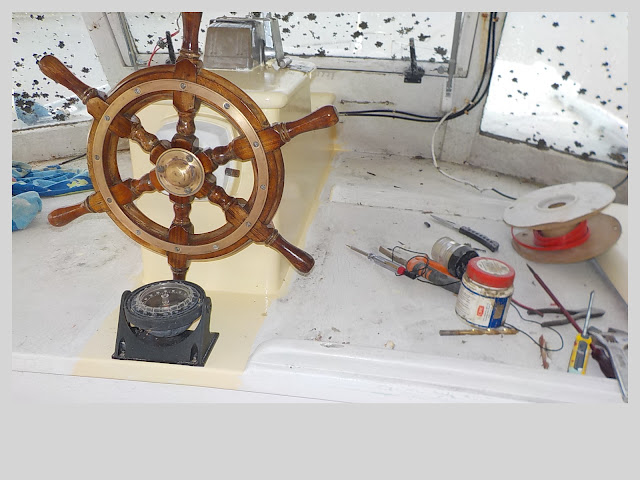 We don't see much of the sun for a while when the sun is low in the winter, so lichen gets a start on the parts of the old ship that I don't get to as often when I'm parked here. That spotty stuff on the windows is lichen, its been sprayed with 30 seconds, not quite "spray and walk away" but effective. I'll be scrubbing it off this afternoon.
The "wheel" has been stripped, sanded and varnished, multiple coats, and the brasswork cleaned off. I've relocated the compass, I'll have to swing it when I get out to sea and there is space on top of that console for a deviation card that I'll make up.  The GPS is permanently located downstairs so a compass up here is helpful if the visibility outside is not so good.
That "yellow" paint is in fact "Oyster white",  much more yellow than I remember it from boats on which I've used it before, but they were a long time back. Its an ok colour though, less harsh than the pure white that is there now.
Visible too are the wires and some of the fittings from my electrical work, I'll paint the rest of the area before pinning the wires in place.
Now all I have to do is get the rest of the ship looking like that.

I’ve begun with the paint on the outside, got primer, one undercoat and one top coat on one side of the cabin, one more coat to go on that side. Lots more to do, but if I do a bit a couple of times a week I’ll get there eventually.

This summer looks a lot better than the last for a whole lot of reasons, one being that I’m in better shape and better motivated to get things done.  I AM going sailing this season, and with the issues around camping ashore that there are, decided to get my little ship “Spook” out from under her covers and sort her out so I can go cruising.  She’s an 18 ft on deck gaff sloop with a long keel, traditional styling, a cabin with a little galley, two bunks and enough storage for a week away, a while back I built a really efficient icebox so I’ll have the luxury of keeping such as cheese, milk and meats.

As I said, unlike the several years just past, I  am going sailing this year.

So, damn all the other jobs that I should be doing,  I started getting Spook ready on Sunday.  Hauled the tarp off,  stripped everything out of the cabin and the lockers, and the gremlins have been in there as well so there were a few surprises hiding in the lockers. Including I must say, the cheap hand crank combination lamp, radio receiver, phone charger unit. The surprise was that works, still, after not being touched for four years.
The L/Ion battery powered cabin lamp still has charge in it, and the black jelly beans in the screw top jar in the galley were (past tense, they’re all gone) edible. Much else went in the trash bin.

All of the exterior brightwork needs re doing, I think it was done with two part polyurethane so getting it stripped back is going to be a pig of a job. That stuff doesn’t sand off well, but comes off in sheets where its failing, so it’s a scraper job.

Incidentally, I inherited a "Skarsten" brand scraper, I'd never used one before and initially it wasn't doing the job.  But I recall, way back, reading in a Practical Boat Owner that unlike the carbide scrapers with their replaceable blade these should be sharpened.  I did that, grinder, then oilstone, and its seriously good at removing that tired and peeling varnish. Never too old to learn eh.

I’m working on her at Mums place, alongside her brothers workshop. Sadly, now in his late 80s he’s not able to do much these days, but it means that I have a place to work on her (the boat not mum) that’s close to a power point and tools. Living on my big boat, tied to a dock at the bottom of a very steep and muddy track means I don’t have access to that for this 1200 kg boat here at home. Pluses and minuses. Mums place is about 20 mins away so that’s not too bad.

I was going to be working on her today, but we’ve had what was possibly the most intense thunderstorm I’ve seen in NZ (I’ve been through a hurricane in the Caribbean, the lightning flashes were so close together you could read a newspaper by them), apart from all the noise and lightning, my little SEI , 15 ft double ender, got picked up off the dock by the wind, and flicked against the side of my ship, breaking both gunwales, punching a small hole in her planking and doing a whole lot of cosmetic damage as well as punching out a window on the ship.  MORE jobs to do.

I’d thought of doing some drawing, I’ve not been able to do much on the drawing board for a while, but had it set  up ready, pens all working, (Rotring Rapidograph, touchy things but their new ink is better) and, what do you know, during that storm it got tossed off the table and now I’ve got to start from scratch to get the drafting machine all straight and square again.  Ever had one of those days?

So, today, being thoroughly annoyed and demoralised, I chose a small job that I knew I’d get done.  I’d stripped and revarnished the flying bridge steering wheel last week, between all the other stuff in my life, and today I polished the brass rings, found screws to replace the missing ones and put it all back together with Anhydrous lanolin on all the threads and the taper.

Its all done. Its nearly Christmas so I’m going to pull some clean trousers on and go out to buy some pressies for the granddaughters.

If you’re finding this all a bit boring,  remember that here in NZ its getting close to summertime, dinghy cruising time.  Here is one of Steve Parkes excellent video essays to remind us just how great small boat cruising can be.
https://www.youtube.com/watch?v=eJmGj4u_fss   If that doesn’t inspire you, nothing will.   Thanks Steve, your videos are much loved.