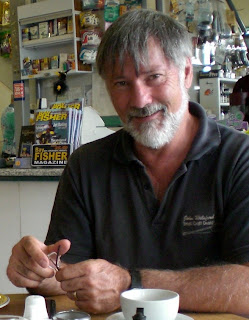 There isn't a recent photo of me about on the net, so for those who'll be attending the several gatherings where I plan to be, this is who you're looking for, or to avoid as the case may be.  Me, John Welsford at Kathies Cafe in Tauranga, ( very very good food!)