Back again after a long trip away.

Back on the air.
A word of warning, don’t expect your email to work properly if you have a local network set up with two computers which use different internet browsers!
But that aside, I’m recently back from 6 weeks in the USA,  visited the Port Townsend Wooden Boat Festival where I met a whole lot of very nice and interesting people, gave two lectures on boat design and the history thereof, participated in a lecture by small boat adventurer Howard Rice, gave talks to the students at the North West School of wooden Boatbuilding and a local Rotary group.
I enjoyed all of those, and will write up more on the show as well as the rest of the trip later.
But first, huge thanks to our hosts Peter and Helen Leenhouts, we feel that we’ve connected in a manner that has gained us lifetime friends, great people who made our stay there memorable.
Thanks also to Anika and Josh Colvin of Small Craft Advisor magazine,  Howard Rice with whom I’ve been corresponding for years but met for the first time at the show, and so many others who made the show such a pleasant memory.
Like I said, I’ll write more about the show, and about the rest of the trip later, I’m still in catchup mode after the trip away and will be for a while yet, so I’ll just touch a highlight here.
That Highlight?  A relatively small thing, and by no means the most important one but one which will remind me of the show and my new friends every time I use it.
“It”?   During a rare few quiet moments Denny and I were browsing through the many exhibits at the show and came across the Lei Neilsen tool stand in the end of the Maritime Centre building,  I was explaining just what it is that makes their tools special and so much better to use than the standard hardware store product when she surprised me by asking “ If I were to buy you one, which would it be?”
Ever been faced with a choice like that?  So many treasures to choose from and only one allowed?
The second most used hand plane in my shop is a Stanley 60 ½, a little low angle block plane which I use for light work, it fits one hand perfectly, cuts end grain as well as rounding corners and smoothing small areas, its versatile and very useful.
I’ve two, one is near new but I much prefer the very old one I bought from a junk shop and rebuilt. 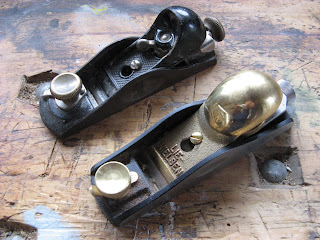 Comparisons between the old Stanley 60 1/2 low angle block plane and the Lie Neilsen of the same size and configuration.  While the differences may not be obvious, they are quite different to use. 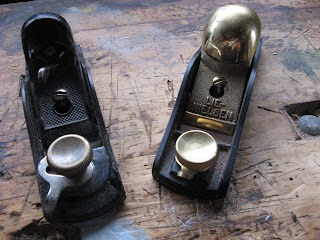 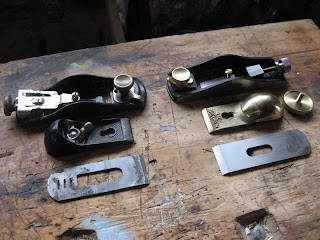 However even the old  Stanley one is not as well made as it might be, and the steel in the blade provides an edge that is only moderately durable, the mounting for the blade is not properly machined so the blade is not rigidly held in the body and consequently the tool is not quite as good as it might be, so I pointed out the Lie Neilsen equivalent and bingo, later that day I became the proud owner of one.  http://www.lie-nielsen.com/catalog.php?sku=60_5
Back at home in my workshop, I tried it.  Even straight out of the box it cut beautifully, and with a very light hone on a 4000 grit waterstone it made silky transparent shavings even from curly grained beech.  Ahhhh!
I’ve taken some pics below, you can see the blade bed in the Stanley is not machined, the adjustment ok but not brilliant, and the blade very thin in comparison to the new one.
The weight of the LN plane is considerably higher, the tool a better fit in the hand, and the whole function much improved.  The old one did the job, but the new one is a real pleasure to use.
Worth the money? You bet!
John Welsford
Posted by John Welsford at 4:33 PM 1 comment: