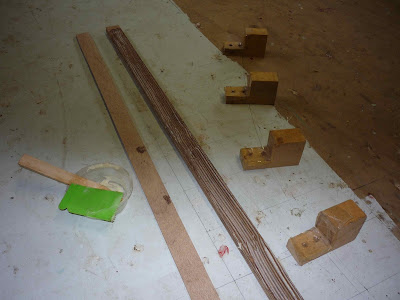 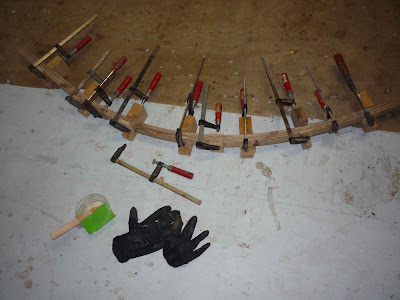 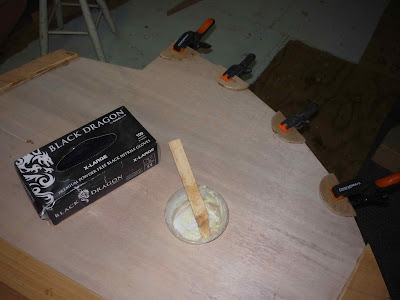 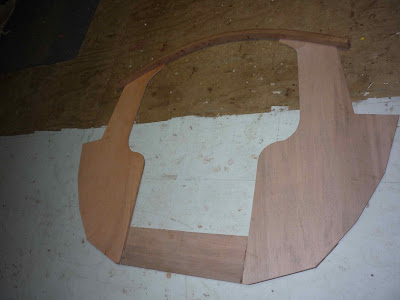 Progress on Long Steps and a few other bits of news.

Stem, frames one and two are done,  frame three is close.  Number three is the one on the forward side of  the cuddy that has the big hatches in  so it wont be completed until I have those hatches done.
I’m looking for a source of surgical tubing so I can make PT Watercraft style hatches, Russell doesn’t make the big SCAMP ones any more so I’ll make my own. There is a high degree of accuracy required to make these, plus design and engineering to make them stiff enough to work at that size but I think I can do that.
If though anyone wants smaller ones, hatches that are truly watertight unlike the plastic ones which seem to leak no matter how expensive they are, here’s the link to the right page of PT Watercrafts website. 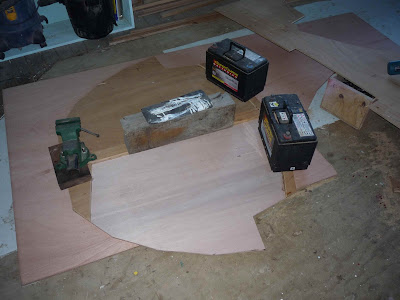 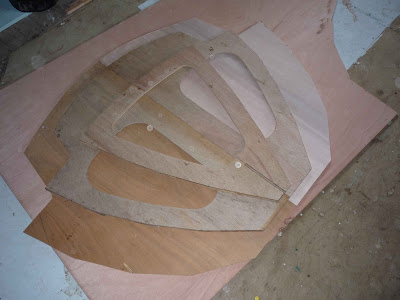 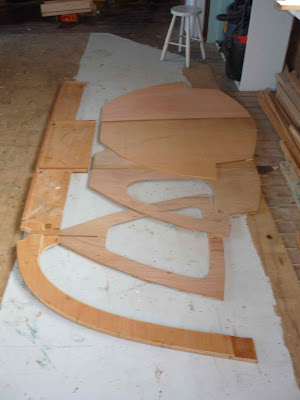 Stem, not quite complete, there is a little tidying up to do yet. I try and get every piece that will go into the boat as finished as possible while its easy to get at. Rounding off all the corners, scraping out any excess epoxy, filling screw holes and sanding it all smooth.  Much easier than trying to do it while standing on your head in a completed hull! 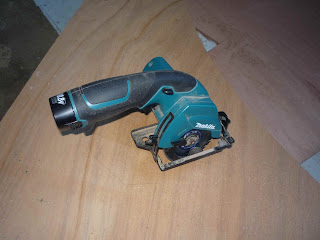 I've mentioned this little guy before, 10.8 volt Makita cordless circular saw.  Its great for long straight cuts in plywood, will cut gentle curves and is much better for some plywood cutout work than the jigsaw.  it will run about three lengths of a plywood sheet on a charge, but I have three batteries and its only a few seconds to change them.  I prefer its light weight over the heavier 18 volt ones. Its going to get a lot of work in the next few months.

My “Essential skills for the beginner boatbuilder” courses are over for the year,  we had a good time, I’ve made new friends, learned as well as taught, and will be running those again next year, probably March / April depending upon what life throws at me.
Watch this space!

Also a “Watch this space” happening is the planned voyage by Howard Rice in his Customised SCAMP down through the channels and islands of southern Chile toward Cape Horn, that’s a major undertaking and I have the privelege of being involved, not only in the voyage but also in the making of a feature length video of the event.
We’ve already got some background material filmed, there will be more, and Howard has four GoPro cameras on the boat and will effectively be making a video diary during his several month long voyage.
This is a stunning place, amazing scenery, interesting history and extreme weather.
I’ll be in Chile later this year to help with the preparation of the boat and the filming up to the point of sailing off.
We’re fundraising for the production end of the video making, so far its all self funded, but its going to be expensive so we’re soliciting donations as well as selling merchandise to produce what we think will be an extraordinary movie.
Your help will be much appreciated.

Heres Howards blog with a whole lot of information on the SCAMP, his, choices of boats, his own SCAMP, and the voyage. This is a good read!  Get your coffee or tea, you’ll be reading and watching videos for a while!

Its Saturday today, 7 20 am, the sun is up, but I’m not.
I bake scones for the meeting of our Writers group, I’m starting to write fiction for fun, putting daydreams on ( virtual) paper so I’d better get off my butt and get on with the day. Thanks for reading.

Three students this time, Thanks Reg, David and Matt, that was a great couple of days.
We had one Pathfinder builder, one making up his mind, and his family visited us while we were having a little break, they have two beautiful children so I suggested that the Pathfinders extra space might make for a less crowded boat when on passage.  As well we had one course participant who has about made his mind up to build a SCAMP.
For the Pathfinder builders, here's a good Facebook page.

Brinson is about to leave to go to the Texas coast to ride along on the Texas 200 with Peter Menedez in his Pathfinder .  Good luck guys, have a good trip.

Thats it on those courses for a while, I'm supposed to be in Chile later in the year, have commitments over summer so am thinking about running two more in April  or May next year. I do enjoy these, come away with new friends, encourage participation soI learn too.

There has been a suggestion that I might consider a " next step" course, I'll think over what might be included in that.

In the meantime, I'll get back to the usual blog posting in a day or three.


Posted by John Welsford at 5:45 PM No comments: