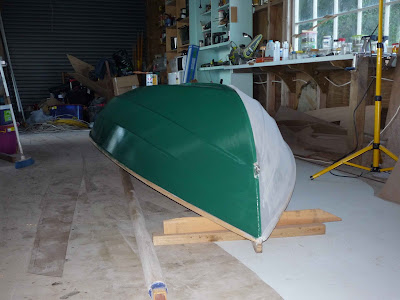 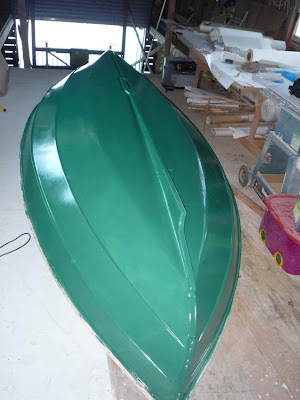 Working on the mast for SEI

Beefing up the mast.

Chuck Leinweber at Duckworksmagazine.com has been using a woven fiberglass sleeve to reinforce the wooden masts he’s made for the various boats he’s built.
As far as I know he’s been using fairly cheap lumber for the birdsmouth system spars, and with the glass sleeve over them there has been no failures even when pushed very hard in events such as the Texas 200 and Everglades Challenge.

Here's his catalogue listing along with a little video showing how the 'glass sleeve is applied.

When visiting last year I had a look at what he’s done, looked over the material and decided that I’d give the stuff a try.  So, today, got the parcel out, sanded the mast blank off a little and got into it.

Its like a Chinese Finger Puzzle, push the ends together and it gets bigger in diameter, pull and it gets skinnier.  To apply, I shoved my hand down it while pushing the ends in, made it big enough to fit the mast through easily, and slid it through.  Taped the butt end to the wood and smoothed out the glass sleeve running my hands toward the other end making it smaller and a close fit as I went. 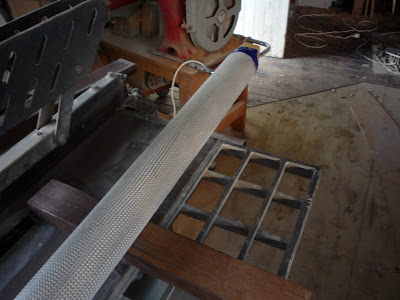 I put a tape around the mast at the top end of the sleeve, this to provide a clean end to cut the strands of fiberglass to.  Next, I taped the end to the mast to control it while wetting out, and got into it with a brush and epoxy. 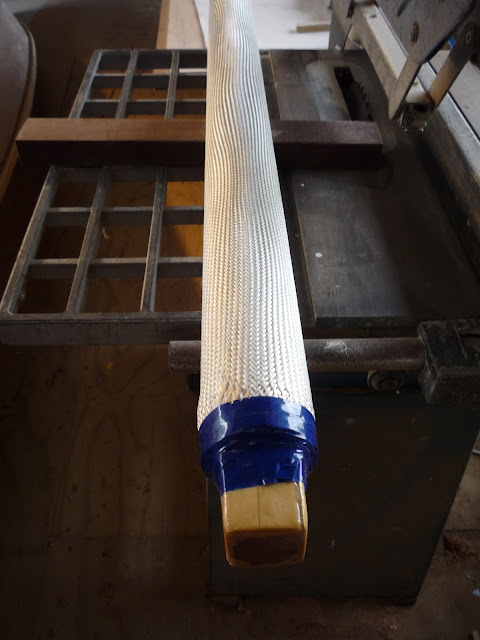 With two layers of gloves on, I smoothed the layup out, working from the start end up to the top of the mast pushing any bubbles out as I went.

This is fairly heavy fiberglass, and it soaks up quite a lot of resin, this 3.5m length took 300ml of resin.
To see how the sleeve would work if I were to use Peel Ply or a similar substitute to control the resin content and finish, I wrapped plastic masking tape around the lower 800mm or so ( I ran out of tape)  and checked the rest to make sure it was properly wetted out.  I’m away for two days, and will pull the tape off when I get back so lets see how it comes out. 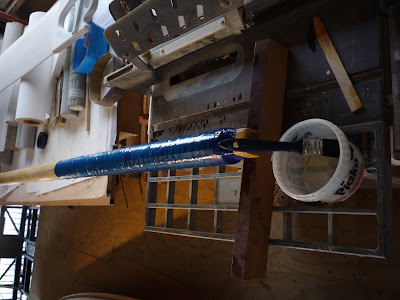 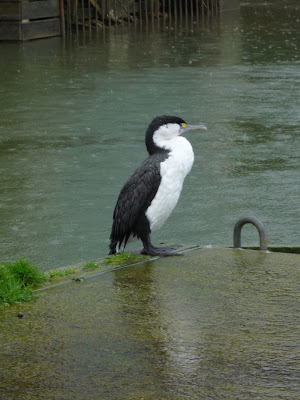 Posted by John Welsford at 10:09 PM No comments:

Nose to the grindstone again


Or at least hands to the sanding block,  I’m unexpectedly home so have a chance to get some work done on SEI.  Its cold here, but the daytime temps are ok for WEST epoxy with fast hardener, and the sun comes in through the big windows keeping the shop warm enough for me to work in without heavy clothing.

So I’m sanding off the plank landings, the fillet between the skeg and the bottom and will be running a coat of ‘poxy with microballoons over the ‘glass to fill the weave before a final sand and then primer paint. 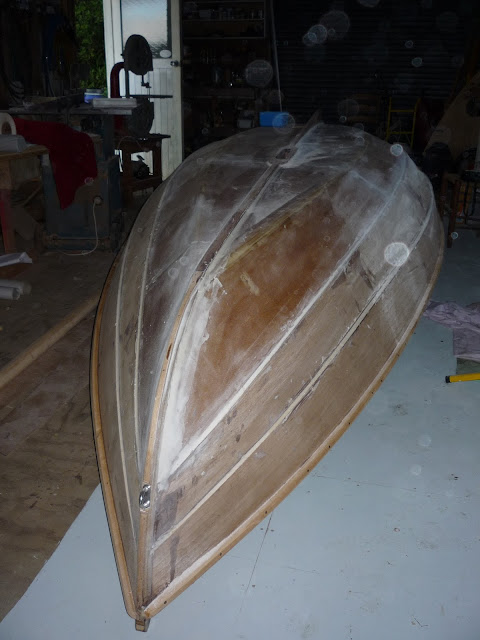 Sandpaper time.   Again.  Powered by elbow grease, It always seems to come to this.

I’ve several part pots of Toplac white oil based marine enamel, they came with my ship and that’s what I plan to use when I repaint her in our spring, and am very tempted to use that so I can get accustomed to its peculiarities before getting into the really big job of repainting the 40 ft motor boat.
So SEI will be white, boring but practical, pale green inside to reduce the glare, maybe some darker green highlights and possibly varnish on the seat tops just to tell people that she is a wooden boat.

Its nice to be at a stage where I can see the launching day off in the distance, we’re in the depths of winter here now, traditionally the worst is still to come but the daffodil plants are poking their heads up, I saw the first lamb of this season the other day and we’ve gained over an hour of daylight since the shortest day so there is, just occasionally,  a hint that there might be spring sometime .
I’d like to be sailing SEI when the good weather comes.

On the techo side of things, Howard Rice and I are both of us fans of anything that saves time when building  boats.  Our time on earth is limited so anything that speeds the building up means that we can build more of them, plus SCAMP Camp is a real teacher in that respect.
To explain, SCAMP Camp is 10 days, plus a little work over the in between weekend if the students want.  It’s a challenge to bring beginnner students along faste enough to get those boats ready to ship out on day ten, and anything that saves time is welcome.

We’ve been using the Ryobi cordless brad nailer for a while now, and it’s a real asset, saves about the equivalent of a day on each boat which is major.
We use the Makita builders laser cross level which not only makes it much easier to get the boats straight and true, but it takes a lot less time to do it.
The latest addition to our bag of tricks is the WEST System six10 cartridge epoxy glue system. 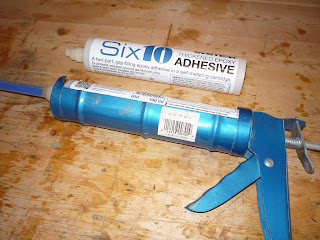 The two parts of the glue are housed in separate chambers within the cartridge, and extruded through the blue mixing tube on the left of the "gun".  There are spares of those available as they are not cleanable but there does not seem to be a problem keeping a part used cartridge.

We don’t use it everywhere on the boats, just for the planking where the ability to run a controlled bead along an edge is very useful, and much faster than mixing by hand, pushing that into a ziploc bag and doing the cake decorating thing.  Sure its more expensive by volume, but there is very little waste and to give you an idea, at SCAMP Camp this year we were hanging a plank every 10 minutes, just about an hour and a half to do a pair of planks on each of the four boats we were building.  I remember that at the first SCAMP Camp we took more than double that,  that’s a saving of about half a day per boat. 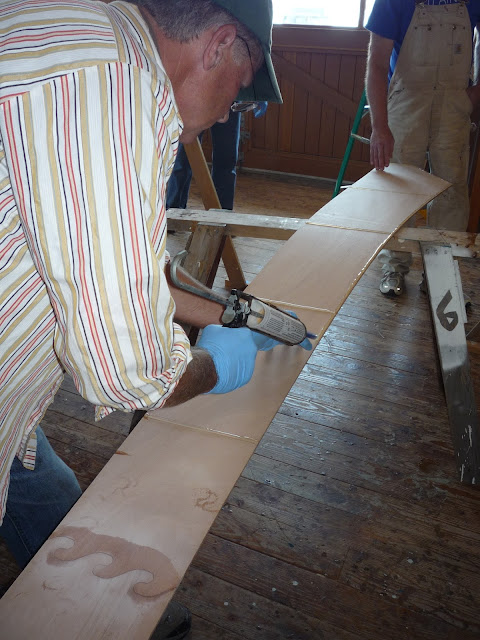 Howard Rice running a bead of epoxy along the edge of a SCAMP plank.  The striped shirt is not compulsory equipment for this sort of job but it sure helps ( create laughter at least).

Well worth the little extra cost!

Things have been very quiet on the posting front,  Apologies for that, but its been a rough week.
While enjoying summer, SCAMP Camp and SCAMP skills, the company of good friends and all that’s enjoyable about the ports Ludlow, Hadlock and Townsend out there on the Olympic Peninsula in Washington State USA, I got the news that my Mother in Law was failing fast plus two other close family members were not well.
So I hopped the first available plane out, and after a trip home that included three flights on an airline I’d go a long way to avoid in future ( Hawaiian)  a night on the concrete floor outside the security office in Honolulu airport, a 23 hour wait between flights and arriving in Auckland in the middle of the night to find one of my two bags not present on the baggage carosel.
I got back to find my Mother in Law at home, only awake for short periods but still able to conduct very short conversations, and I had the privelege of staying close by and supporting the family for her last few days.
She died on Monday last, the funeral was on Wednesday, and I’m thankfully back at home on the ship catching up with tasks left aside while more important things were attended to.