It will be new years eve here tomorrow, so here's a progress report on Long Steps.

All the very best wishes to everyone for 2018, may good fortune and happiness be yours wherever you are.

Christmas time is busy here, engineering customers wanting to get orders out the door needing machinery running again,  family to visit, a bit of sailing to do and my dog still wants to take me for a walk every day.
But 25th Dec has come and gone, I’ve managed to keep the sander and the paintbrush going on small things around my ship, Kairos, and I’ve even done a tidy up in the shop.

Consequently drawing and boatbuilding has been on hold to a certain degree, so there is not a great deal to show.

But, here is what has been done.

First of all the tiller line tunnel is all complete, the beginnings of the tiller pivot is there, and the hatch into the lazarette is in place although not fastened yet.
Some will note that I’ve put a single hatch in there rather than the two shown, but there are reasons. One is that I only had one in my store of parts, and didn’t feel much like buying another. Two is that I want to build an anchor well in under the tiller, while its not usual to carry the ground tackle back there, there will be a monster truck battery up in the bow and I want  to even the weight distribution out, and  the third is that given the anchor well being there I’m going to bridge the gap from the well sides out to the stringers with small seats so I can lounge back there with an arm draped over the tiller when on a broad reach or running downwind.
Those seats would not leave enough space for a workable hatch through that bulkhead, so it all works out. 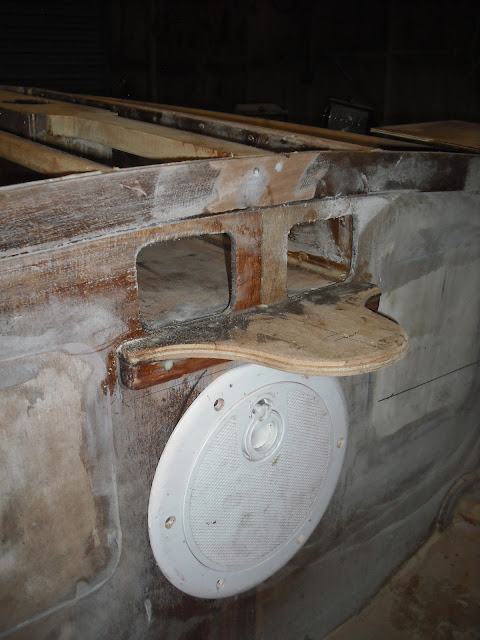 Yes, I changed my mind, filled original pair of hatch holes back up and hacked out a central one. The anchor locker will be just below that white hatch and come out just into where the old hatch openings that you can see are. The seats will go from the walls of that out on the level of the black line you can see out on the right of the pic. The "tongue" sticking out is the lower support for the tiller pivot pin.

Next, I’ve started on the rowing footrests, they are a single piece of 12mm plywood, cut to fit across the removable “footwell” section of the cockpit floor and shaped so it will still allow visual access to the compass, and have high enough “rests” for the feet. It hinges down flat when sailing. 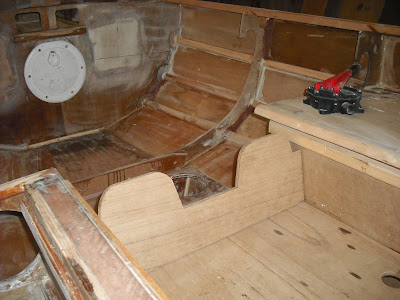 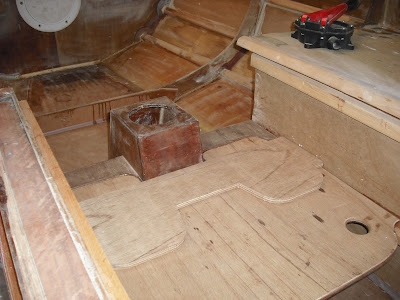 The rowing footrest, just rough cut at this stage, will be hinged to that removable deck over the footwell, and it is to be supported by the compass binnacle in the middle, and a pair of cleats on the seat fronts. Rowing without footrests is not really much fun, but permanently mounted rests would be in the way when sailing. Hence the fold down setup.

Third little thing, I’ve put the nosing piece on the port side seat, that has a carefully made profile on it that lessens the stress on the underside of the thigh when seated, and it traps the rowing seat between the underside of it and the rowing seat support rail.
That rowing seat can be moved forward and backward to any position needed, rowing, sailing, cooking or whatever, but it has to go out the ends of the slide as it cant lift out, so its secure.
Thats visible in the pic above, next to the Whale Gusher hand bilge pump, one of a pair to be fitted in addition to an electric 800 litres a minute one.
No, the gusher wont be mounted there, it goes on the end of the seat  with just the handle sticking up back toward where the coaming will be.

I’ve also got the towing eye in place, it’s a big heavy 10mm stainlesss steel eyebolt, 185mm long, with a 25mm inside diameter eye. It’s a big lump, but its possible that Long Steps might be under tow at some stage, so its strong.
I’ve counterbored the hole through the stem at 30mm diameter, and 30mm deep, filled that with epoxy filler and run the drill through it again. I’ve also proofed the hole for the rest of the way through the plywood stem.
The filled area will have a small countersink in the face, then a 3.2mm neoprene “o” ring will be fitted over the eye bolt, coated in anhydrous lanolin and the whole thing done up tight.
At the inner end, there is a grown crook, I think its from where two similar sized branches met in a fruit tree of some kind, and I’ve bandsawn it to shape to fit between the third pair of stringers up where they meet the stem, and run some really big screws through the stringers into it so it will carry the towing load out into the main structure. 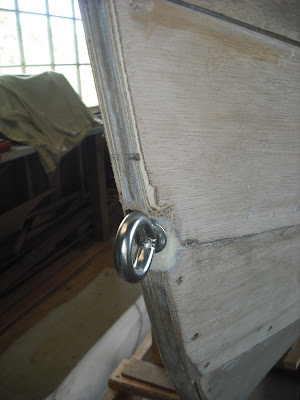 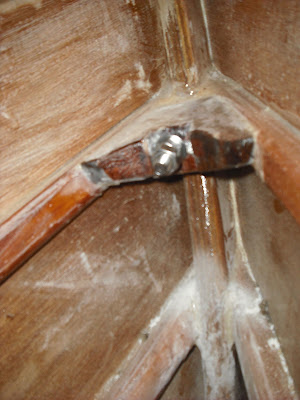 I’ve a few of these curves and crooks, thanks to my friend Bill who’s moving house to a smaller space, he’s kindly passed them on. Thanks Bill.

That’s about it for now, but if anyone can find some Rotring Rapidograph Kapillarpatrone MF black  ink cartridges I’d be very grateful, the New Zealand importer cant supply and neither can the major mail order suppliers.  The standard ink doesn’t work on polyester drafting film and if I cant get it, that’s about two grands worth of pens that I have to replace with Mars ones.

Best wishes to all.

For some its Christmas Eve here in New Zealand,  for others its midwinter and the beginning of the rise to springtime, for us here its full summer of course, but in any case it’s the festive season whichever way you see or celebrate it.

For me, a new year is only a few days away, and the new years resolutions involve family, adventures planned, boats in build to complete, a major paintjob on the old ship on which I live, and boats to draw plans for.

I’m hoping to spend more time out sailing this season, last year saw me travelling in southern Chile so I “lost” a lot of the time I’d have had over the summer and didn’t get out much, but as of last weekend we’ve already begun cruising with an overnight trip out to a popular island just north of here. There will be more of this!

So, from here, all the very best for the season, the new year, the winter or summer whichever applies, best wishes for a year in which things go well for all of you, best wishes to, to your friends and family, and best wishes to all those who venture out on the water.

May good luck go with you wherever you go.

‘Tis full summer here, we’re getting unusually hot weather, dry and often windy.  It was 30 deg C a couple of days ago, that’s about 85 F, much hotter than we’re used to.
But the beaches are crowded, people are out and about, especially in the evenings, my dog is flat on his side in the long grass under a shady tree and I’m having to refill his water bowl a lot more frequently than usual.

Summers here, and its going to be a good one.  The Kenepuru Kapers dinghy cruise is on again, here’s a video from last time which shows what we got up to last time, thanks Hamish. https://vimeo.com/225650216

For those who’d like to join in, here’s the facebook page,  last year was a real treat, I spent much of the  time with Brian Hogg on his 6m Whaler “Emeraude”, there is plenty of room to sleep on board, he’s a pretty fair cook and we got along famously.   For dates and more information ---
https://www.facebook.com/groups/1869029303325656/?fref=nf

The Lake Rotoiti Classic Boat Festival was on the day after we pulled out of the water, and we, in Emeraude, managed a very handy win in the sailing race, helped by very gusty and strong winds on a course that took us out into the worst of it.  Emeraude handled that well. Sailing on my own designs is a treat, I learn a lot from that.

While several of us are planning to cross Cook Strait on the boats own bottoms, buttthat doesn’t prevent others from crossing on the ferry and either launching at Picton and meeting the rest of the  fleet at a pre arranged place, or for the mainlanders, joining us where suits.

Last year was four boats, six people, and we had a very relaxed and enjoyable time, with the occasional “learning experience” to keep it interesting.

In the meantime, next weekend, a couple of us, with anyone else who wants to join in, are sailing from Sandspit across to Kawau for the weekend,  Haddon and I hope, Anthea, will join us on Saturday, and more are welcome.
Breakfast/brunch at Kawau Yacht club on Sunday, probably around 10 am or so. Good food and a lovely place.

15/16/17 Dec, the tide is helpful, and I expect that we’d be leaving Sandspit mid evening, so if anyone has to finish work and drive on up you should still be ok for water in the estuary.

Then there is the Mahurangi Regatta of course, the biggest classic boat event in NZ and a mind boggler for those who’ve not been there before.  I’m planning to take Spook up there, my 18ft on deck gaff sloop, Ive not sailed her much of late and its past time I did. She’s a sweet little ship and deserves more than to just sit on her trailer dreaming of the sea.

That event is on January 27th next.
There are a lot of small boats based on the beach, which by the way is a great place for a family picnic while the boating events are on, the small boats race the same course as the big boats (which is exciting, having a 70 foot gaff cutter bearing down on you when you're sailing a 12 footer is a bit intimidating but accidents are almost unknown) but once around instead of twice.
There are rowing races as well, events for the kids, sandcastles, egg tossing and a fairly serious tug o war event.  One of the best days out of our summer.

I’ve just had a call from Marcus Raimon telling me that there is a move afoot to include a “Small Ships” class in the annual Tall Ships event in the Bay of Islands, this would be for sailing boats under 6m, of somewhat traditional type, the rules to be set sometime, and its quite possible that this summer that class could be included on an “informal” basis, with the next event including it “officially” if there is enough interest.

Jan 6th.  Pathfinders, Navigators, Houdini’s, SCAMPS and Pilgrims, all would be very suitable.  The party after the race is ledgendary!

I’m thinking that the “Summer of the paintbrush” had better include some new varnish for Spook, new wheel bearings on the trailer and a tidy up for the dink (My prototype Scraps) . Its about a three hour tow to get up there, I can do that.

Posted by John Welsford at 10:33 AM No comments: