Well, Ive not done this before so its a bit of a learning curve.  The intention is to have a place where I can chat, post pics and ramble on about things that I've been up to, mostly boating but sometimes other stuff whether associated or not.
So latest, just bought a boat.  Boat designers like me tend to have boats of their own design, but occasionally will fall for a classic and thats the case with what I've just bought.

I'd been working on finishing the house that I've been building for Denny and I,  we've been livin in it for 3 years now and its about time I got the last few things done and the final inspection and sign off all officially complete so there was not really much prospect of going sailing this season other than perhaps borrowing a boat.  That is not really such a good idea as there is the possibility of ruining a good freindship if something goes wrong, so I'd begun building a very simple 14ft dinghy that would have space enough for me to sleep aboard and the ability to carry enough gear for a week away.
Got well started, frames built, jig all set up and bottom set up, stem and stern up, and was looking as though maybe late autumn would see me in and sailing. Just in time for the cold wet weather.

A freind though had some changes in his circumstances, family committments, his boat getting to be too heavy to handle singlehanded, not in a sailing sense but on and off its trailer and getting the rig up. He and I have worked together, know each other pretty well and share the same tastes in boats.  We both have a particular liking for the little boats that serviced the South Coast of England in the late 1800s, lovely little sailing workboats that were the pickup trucks of the area which has many estuaries, creeks and harbours. With a coastline made dangerous by a high proportion of gale force winds and fast currents these little boats needed to be extremely capable, but in order to be workable in the small waters of the creeks and rivers they had to be both maneuverable and shallow draft. The environment encouraged the evolution of the local craft into a particularly seaworthy small sailing workboat with very good manners, ideal small cruising yachts.
It was a vessel closely modelled on these boats that my freind offered me, at a price that was very attractive, and its that boat that I'll be writing about in this blog, at least for a while. 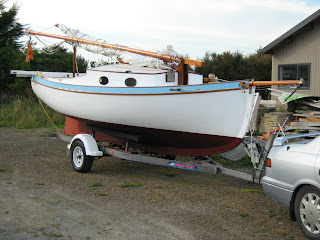 This is the good ship "May".  All of 18ft on deck, 7ft wide, draws about 2 ft with the centerboard up, and displaces just short of a ton.
She is rigged as a gaff sloop, and I may add a staysail to convert her to a cutter rig as she is a little heavy on the helm as she is.  Mind you that might come right with a change in trim.
She is built of Macrocarpa ( Cypressus Macrocarpa) grown here in New Zealand, a very different wood to what that species of tree produces in its native Monterey, California. Its fragrant, strong durable and relatively light weight, idea stuff for boatbuilding.
Mays planking is about 18mm ( 3/4in ) thick and her construction is edge glued carvel with steamed and copper riveted frames.  You can see the keel under her, there is about 300 kg of lead in there, plus another 60 kg trim ballast inside, and she is a very strong and very stable little ship.

There are lots of jobs to do, today I took the tiller off, found that the sloppy feel was due to the pivot bolt being soft yellow brass and badly worn, so its now got a stop glued to the underside to hold it in a better position and it has a stainless steel pivot bolt.  That should help no end.

Its been a busy day today, I've mounted a compass on the cabin bulkhead at the forward end of the cockpit, made a much better pin to hold the centerboard up when not needed and invented a neat way of stowing said pin ( below) 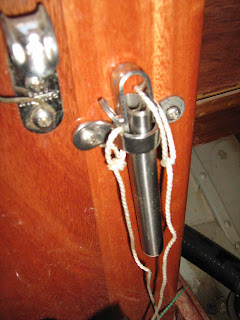 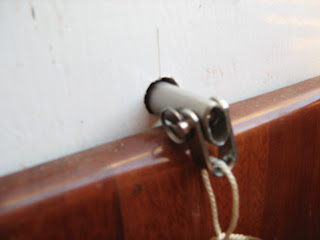 That half inch stainless tube is a much better pin that the 1.4in copper rod that was there, it bent so badly it was always jamming and was too hard to pull out. That plus it had no lanyard on it so tended to find its way into the bilge and of course could not be found when most needed.

Other jobs today, between parts of building a laundry that the inspectors insist on being inside when we have a pefectly good one out in the next building ( rant)  and digging drains for same, I pulled the wheel nuts off, wire brushed the rust off and coated the stud threads with anhydrous lanolin. Most people wont know this stuff. Its refined wool grease, ( sans smell) and is an extremely effective anti corrosion compound that wont wash or leach out of the bolts threads. It also tends not to be a very effective lubricating agent. If I am unfortunate enough to get a flat, I want to be able to undo those nuts, but of course dont want them to undo themselves when I'm off down the road with my boat on the trailer, so this stuff is ideal.
Its late, I'm off to bed, will be back with more in a day or so when I have completed the jobs on the house, and prioritised the long lists of things that need doing before I sail away into a sunset or two.
And its goodnight from him.

JW
Posted by John Welsford at 2:12 AM