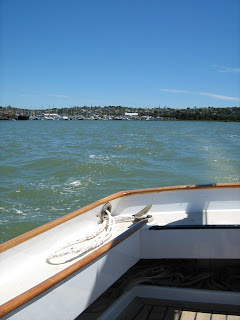 As I left the marina the wind, which had been in the east, died away completely, the little wind we had was only as a result of the tide moving us through the air but it was enough to give steerage way in the narrow channel. You can see Westpark Marina off in the distance, I'd be back in 5 days. 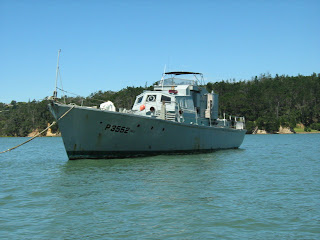 Aucklands upper harbour has some interesting sights, this is an old coastal patrol boat, I think it was used for a long time as a fisheries patrol vessel.  Its in pretty good shape and is obviously being well cared for. 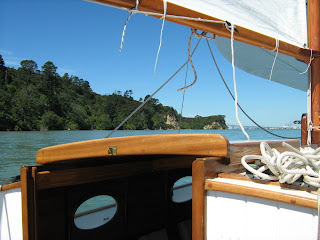 Coming around Kauri Point the wind is very gradually picking up, and there is the first view of the central city and the harbour bridge.  From here I could see the smoke from a cruise liners gensets, and watch the plume which gave me early warning of the several wind changes that came during the afternoon. 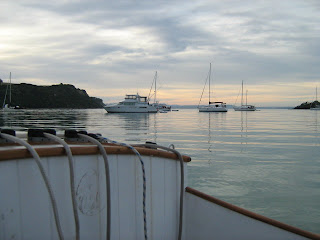 In Islington Bay, its blowing pretty hard out there but when I took this pic it was wonderfully sheltered in the anchorage, but it didnt stay that way for long.  A few hours later the torrential rain was going past the ports pretty much horizontally.
Still, it was a nice sunset.
Posted by John Welsford at 1:05 PM