Making the job much easier

I’m setting up the frames for SEI. That’s usually a slow job with a level, stringlines and a plumb bob, but I’ve borrowed a carpenters laser level. This is about palm sized, comes in a nice little padded bag that looks a little like a camera bag, and has a padded wrapper around it inside to further protect it in what would usually be a very “robust” environment inside a house builders van. 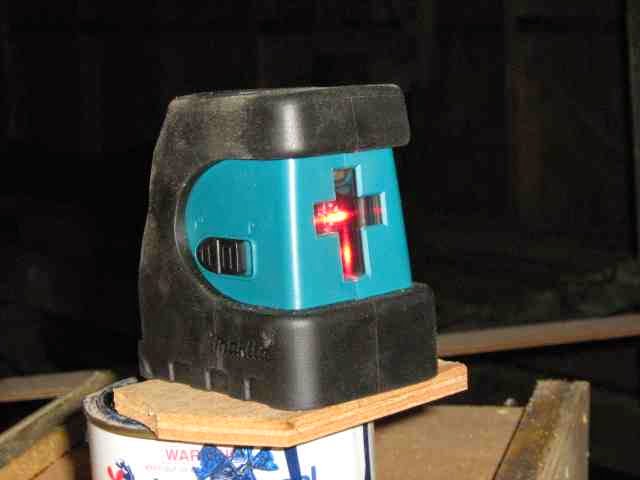 The Makita SK102 Laser cross level.  To give you something by which to judge its scale thats a 500ml paint can its sitting on ( about a pint or so) . Is about 100mm ( 4 in) high. Runs on three AA sized drycells.

To set up the boats frames, first of all I had to establish a straight base line, that was easy in this case as I’ve just laid a plywood floor and the line where the sheets meet made a perfect straight line.

Next,  measure out and mark the frame spacings using a carpenters roofing square to put lines across at right angles at the correct distances along that line.
Then I set the laser level at the right height down past where the bow will be, and began lining the frames up.
I’ve marked the frames with a vertical center line as well as the waterline across, so setting up is just a matter of getting the  cross lasers vertical red line on the centreline, and lining the frame up on that, then rocking it until the waterline is congruent with the lasers cross line.
So easy. 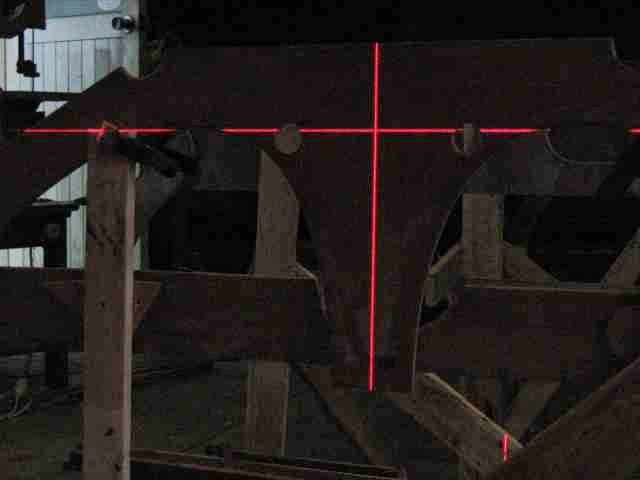 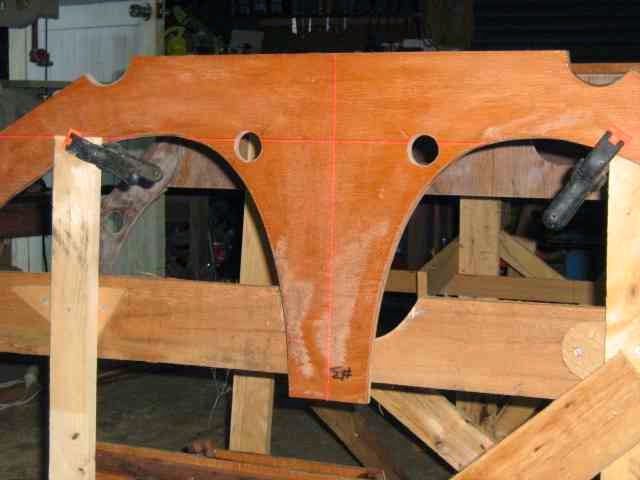 Its hard to show just how clear the laser light line is, so I've taken one with the flash off ( top) and one with it on to show more clearly what I am doing. Its bright, the laser itself is about 3metres away in this pic, no problem at all seeing where the line is even on a bright day!

Why did I not think of this before?
Well, to be honest these things have not been around for very long, the LED laser technology is fairly new and the manufacturing tolerances very exacting, so in the past they were both very hungry on batteries, and more than a bit expensive.
These cost about a days pay, and I think that the payback would be about two small boats in terms of  hourly rate v/s time saved.

To save me wittering on about it forever, here is a link to a YouTube video review of the little laser level which shows it in action.

As a “by the way”. I see that some rental places have these or similar for hire, a days hire is a lot cheaper than having to own one for just one project.

SEI is making progress, between another visit to the clinic with the usual two days to recover, looking after my wife who has been down with the flu which kept me away from the boatshed (its about 2 hours drive each way from her place to mine) and catching up with machinery repair work I’d not done much for a couple of weeks so its good to be back on the job and feeling up to making progress.
Watching the frames line up, and the shape appearing is great, one of the best parts of building a boat is that moment when you walk out to the end and sight along the framework and the shape of the hull magically appears.

I hope to have the rest of the frames and the bow stem set up tomorrow morning so will put up some pics so show the progress so far.

On the machinery repair work, I’ve done the job on the big bandsaw at the Maori Kings master carvers workshop, but no pics I’m afraid.  Protocol requires that the work be finished and blessed before it is seen, so no cameras in the shop where these works are being created.
But I know where two of them are to be erected, they will be the spiritual guardians of a new bridge to be built over the Waikato River and I can watch for that then get a pic or two.

I’ve just looked into my cup and its somehow become empty, so its time to get back to work.