Back to the Pacific NW, paradise ( in summertime)

I was surprised to be asked.  Complimented too, you've no idea.

I’ve a trip coming up, I’m to skipper a charter motor cruiser in Desolation Sound, British Columbia for a 10 day charter with a friend who does not have the qualys to drive same.  Living on board in the small space that the boat offers will mean we get to know each other pretty well but that should be a very good thing.  We’re looking forward to a really great adventure, the area has amazing scenery, the boat is comfortable and roomy, we’ve time to do some exploring and if the weather does not co operate we can just sit in a sheltered inlet and relax. 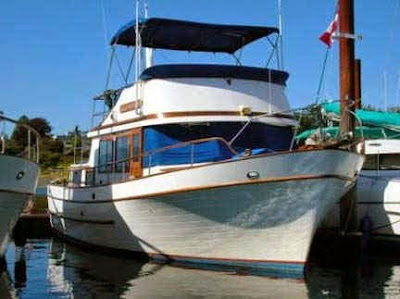 Heres our ship, 40 ft, single engine about the same size and power of my own ship so she should be easy to learn.
So in five more sleeps (this is better than waiting for Santa when you’re 7 years old) I’m on the bus, then the plane direct to Vancouver from Auckland.  11 ½ hours in the air, this is becoming regular so I’m getting used to flying long distances, still don’t like it but I can tolerate it.
I’ve bought an e reader so I don’t have to carry a couple of kilograms of books to keep me from going mad trapped in that big aluminium tube in the sky.

Back on 7th June, so I’ll miss the start of the “Race to Alaska”.   I will though be following the progress on their website.  http://r2ak.com/
I know most of the guys in the video clip, the serious looking dude with the suitcase handcuffed to him is SCA Magazines Josh Colvin.
This is a wonderful event, I wish I wish I wish I could be on the start line, even a SCAMP would do. It’s to be run every second year, so maybe??????
What am I saying, "Even a SCAMP? " Actually a SCAMP might not be the fastest thing in the race but you could do a lot worse for comfort and seaworthiness, I gather that there is one entered to do just leg one across from Port Townsend to Victoria,  in itself no mean voyage in a little boat.
( GO Simeon  yaaay!)

In the meantime I’m busy completing the plans for “Saturday Night Special” a 14 ft fairly quick and dirty fast sailing skiff designed for the Texas 200.
The original intention  was to have a group in New Zealand build themselves frames, transom and stem, rudder and centreboard and put them into a mountain bike air travel bag,  arrive in Texas, buy plywood and epoxy etc, team up and using paper patterns build their two person boats in a week or so, ( rough is expected) sail them and either do an Andrew Linn ( in joke, I’ll explain it if you really want) or sell, give away or whatever and fly home.
The costs of shipping a boat from New Zealand was prohibitive, hence the thinking.
A proof of concept boat was built, it sails pretty well, the owner was complaining that he could not quite hold a Laser upwind, but that was with the T200 rig intended for very brisk winds, and the boat very much untuned so its reasonably capable.
Enter Chuck Leinweber of www.duckworksmagazine.com  and his boatbuilders supplies company, (unashamed advert, they’re good guys, have good gear at unbeatable prices and are very prompt to ship)
Chuck had the idea of getting a group of volunteers to build maybe half a dozen of these, and offer the use of them in return for donations to Cancer research.
The  fleet has the potential to work well at other events as well, Sail Oklahoma, Everglades challenge, Florida 120 and so on as well as at messabouts, so I’ve reviewed the structures,  put a swinging centreboard in, gone up a little in size so she can be built just under the 14 ft limit above which Texas law will require the boats to be registered, and drawn up a proper set of plans. 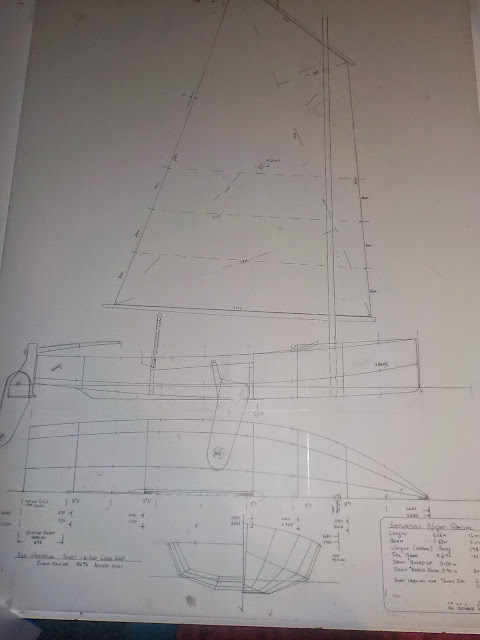 With careful selection of cheap plywood and buying fittings at good prices, ( you know where to get those eh! The plans show all the fittings designations for Duckworks fittings and they'll have a package deal price) and one of Polytarp Daves sails you could do one of these for maybe $1500. A lot of boat for not a lot of pain.
For the sharp of eyes, the boat can be built at 13 ft 10, or 14 ft 8.

For polytarp sails and sail kits www.polysail.com
Also note that the boat will suit the larger of the RSS Sails that Duckworksmagazine offer at VERY good prices.

I hope to have these done before I leave, so need to be getting on with it rather than sitting here “talking “ to you people.
Anyone wanting to build, even just a frame or a centercase, or to use one in the event contact Chuck at the website above.  Its a worthy cause, we've all of us lost too many friends to this disease.

Its an interesting project, the boats are simple, easy to build, cheap, no frills and by the standards of the trad small boat world really quick.
They’ve lots of built in buoyancy so can be recovered in case someone dumps one, at 15 knots a mistake really means something, so safety is a consideration that I’ve designed for.  (Reef early, especially downwind)

Here’s the link to the T200 website, it’s a 5 day bash up the ICW from down not far from Mexico to up near Houston, the prevailing wind is a screaming stern quarter tailwind and the water generally shallow and warm.
www.texas200.com
The plans will be available, and anyone building one for their own use could add frills if wanted, but these ones will be bare essentials.

I’m scheduled to share one with Small Craft Advisor Magazine editor Josh Colvin www.smallcraftadvisor.com/   on the 2016 Texas 200. I’m  sure that there are cures for this form of insanity but no one seems to have found it yet.