Cruising, from a small boat perspective

I love camp cruising, began my cruising career in a then 40 year old open 14 ft sailing dinghy with a damp kapok sleeping bag, a very old and temperamental kerosene stove, two spoons, a can opener and a bucket.  We had a tarp which got slung over the boom, and generally tried to get the boat up into the head of the harbours or estuaries where she would settle fairly upright on the mud overnight.
We had no outboard motor, no cellphones of course, and were frequently late home.  Not just an hour or two, sometimes several days!  If we could we’d find a phone box and ring one or the other set of parents knowing that whichever we’d talked to would phone the other.
I recall one trip where we were trapped about 40 miles from home by a change in the weather that brought a headwind too strong for us to handle, a headwind that  stayed for days, so we eventually caught a bus home, sitting alone at the back to spare people the smell of our unwashed selves.

A week later, bathed, laundered, rested, carrying a bag of food and praying for for a change in the weather we caught the bus back, dragged our little ship out of the mangroves and sailed her home.

My friend and I were 15 years old, parents and school seemed ok with our disappearing for a few days now and again. Great memories, but these days I prefer to be a bit more comfortable. Dry, warm, better fed, and with space to lie flat, stretch out and sleep well.

I still get to go camp cruising. I very much enjoy it.  A week in a small open boat brings me so much closer to the elements than other forms of cruising. Sometimes I’ll camp on shore, but of late the pressure of housing being built in even the far reaches of the harbours means that many of the little spaces that were so suited to pitching a tent are no longer available, so I build and play with boats that have a sleeping space built in.

I prefer to stay dry, properly dry not just less damp than usual, so a decent shelter is part of the equipage.
Its  a somewhat fraught subject, there is much debate as to what fabric, what configuration and how to do the detail work.  As my next build is to be a serious open sail and oar cruiser I watch for debate on this subject in the hope that I’ll pick up some useful ideas.
Rick Thompson built one of my Walkabout sail and oar cruisers in a rowing only version a while back, has done an exceptional job on the build and has been very active both in using the boat and in participation in internet forums.
I was very interested to see his posting over on the WoodenBoat forum on his building of a quick erect tent for his boat, he’s meticulous in both research and methodology, and his tent is one of the best I’ve seen.

I’ve borrowed a couple of his pics and posted them below, nice work Rick, thanks for posting that information.

Go and have a look at the thread for the detail on how it was done. 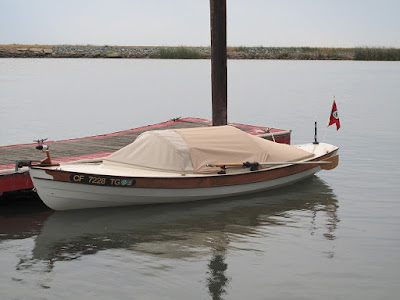 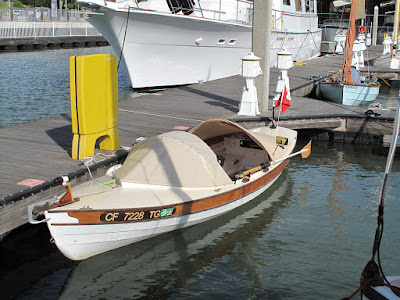 Posted by John Welsford at 6:39 PM