Old tools, but good ones.

Tools.
I’m not really a tool freak, not a collector in the sense of lovingly restoring old woodworking hand tools and putting them on display in glass fronted shelving but I do enjoy getting my hands on old tools and bringing them back to life. When I’ve a particular little job that needs a special tool, and I can go to my shelf and pick up a tool that was designed to do that special thing, I get great satisfaction from using it.
So I watch out for the unusual as well as the standard ones that I use every day.
Junkshops, garage sales, on line auctions and occasionally a friends eagle eye all bring in treasures.

My usuals the ones that I’ll buy without thinking are the Record and Stanley number 3 or number 4 planes.  Those are tools that I use every time I go into the boatshed, and now, living on the ship with the boatshed here plus my old shop back in Hamilton still being used, I have built up a double set of tools.
I’ve now 10 of those, the reason being that when working and one wears its sharp edge off or I hit something that puts a nick in the blade, that plane goes in the shelf above and I pick up another that’s sharp and set.
To be sure, when they’re all in need of a sharpen it’s a big job, but on a wet morning when there is no one around its quite a satisfying thing to set up an assembly line with the dry grinder, the wet grinder, the two different grade waterstones and the lap, and run through them all.

Just recently my friend Paul Mullins came across a couple of unusual tools when a neighbours shed was being cleaned out.  There was a Stanley number 67 Spokeshave, this one is designed to cut right up against an edge and could be used to tidy up a curved rebate, left or right handed. 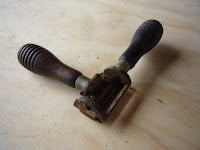 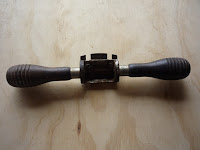 The number 67 spokeshave, note how the handles can be repositioned to allow it to work against a rebate, that can be done either side.  Interesting tool.

The other is a router.  No, not one of those noisy finger biting things a “real” one.  Used to be known as a “Grannys tooth”. Its a Stanley number 71 1/2,  one of a series of different sized routers that Stanley made.
It’s a hand tool, essentially a flat plate with a pair of handles and a cutter that extends below the plate, push it and it cuts away below the surface, the cutter can be set for depth so its able to gradually work away increasing the depth of the cut.
Excellent for relief carvings. 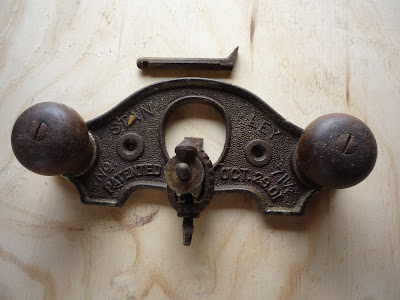 Stanley number 71 1/2 router with 1/2 in and 3/8in cutters.  I do use one of these now and again, have also the very small one which I use when carving tabletops and such.

I was thinking that I should be looking for a brass wire brush to start tidying these two treasures up, they’ve been soaking in Inox for a while now, and are ready or a cleanup before I regrind the cutting edges and flat the backs of the irons, when my very elderly uncle, a joiner by trade, gave me a Stanley number 55 combination moulding plane that he’d had since very early in his career.
Its got all the standard irons, no parts missing, it’s a real treat!
Heres the link to a page of pics.

These planes can be used to make mouldings. Look around your house at picture frames, the surrounds of windows and doors, skirting boards ceiling coves, cupboards and chests and you’ll see a huge variety of different shapes.  This plane can make all of those.  Not in one pass you understand, but by planing away part of the profile then changing the blade and the positioning of it, it then does another part of the shape. 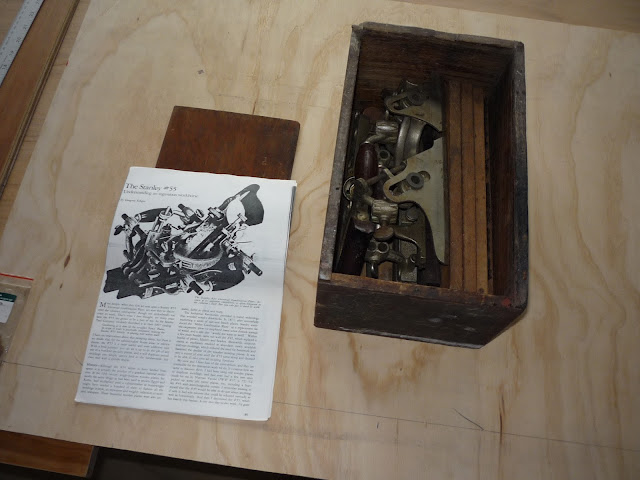 In its original box, this ones done quite a lot of work but all of the original parts including "the book" are there and in good order. 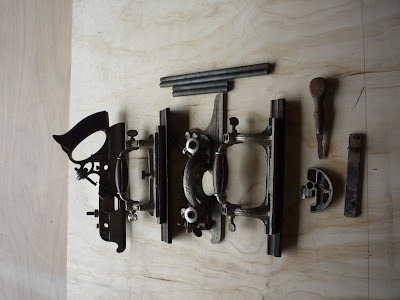 There are a lot of parts to one of these, the handle is out to the left and each of the parts to the right is a separate fence and depth gauge system, some of which have knife holders as well as scribers. 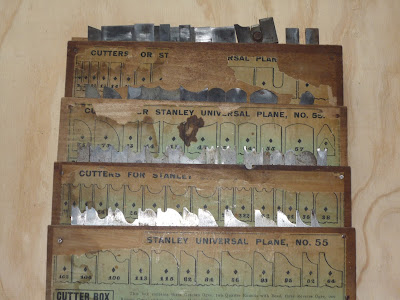 I should have counted them, there are probably 40 different knives in the set, rounded, radius edge, beading, rebate, oogee, you name it.  Amazing tool.  Yes I've used one, but its not something that I'd use every day. This is a collectors item, will be greased up and stored, but maybe, just maybe, I'll need it to produce a moulding to match something existing someday.

They're slow, but if one is matching up a section no longer available off the shelf, or too big for a router bit (the electric finger biting kind not the one above) it’s a practical and useful tool.
That plus it’s a really impressive thing to show off with.
I need more shelves.
Again.

Posted by John Welsford at 1:05 PM