That was a bit of an adventure.  I’ve put the old ship on a scrubbing grid a couple of times, but having her in the marina yard perched so high up that I could comfortably walk under her was a different experience.
So, she’s all antifouled, two coats, topsides sanded, some dings filled, spot primed, undercoated and two coats of enamel.
I had time to do it, but the real time consumer is the time required to get each coat dried enough to take the next coat. So it was one coat per day, plus prep for the next.
I’ve had all the through hull fittings apart and checked, greased with marine grease and reassembled, now I can turn the heads seacock off and pull the pump apart to replace the impellor.

Gulf Harbour Marina has just put its prices up, it seems to be the same with most of the other Marinas, all to the same level.  A big increase, they’re really expensive now, my week on the hard cost me almost a grand.  Time to think about the smaller yards that are well out of Auckland, at that price the cost of the diesel needed to get to them is a good investment.  I’ll be shopping around in future.
I have to say though that the guys who run the travelift were helpful and efficient, thoroughly professional.  Not everyone gets to see their home hanging in the slings of a giant four legged crane, that’s hard on the nerves and to see them working with care and attention was reassuring.

Also helpful were a couple of guys from Brin Wilson boatbuilders, I was parked right next to their premises, and one of the guys there suggested that I could use their wheeled scaffold if that would help, it sure helped, a great deal.  Saved me a lot of time.
Also, he and one of the others made a few helpful comments about the painting, sanding and prep work.  Professional short cuts.  Thanks guys. 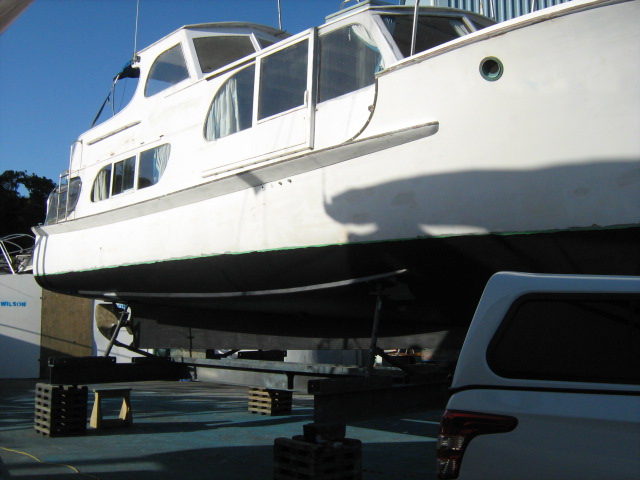 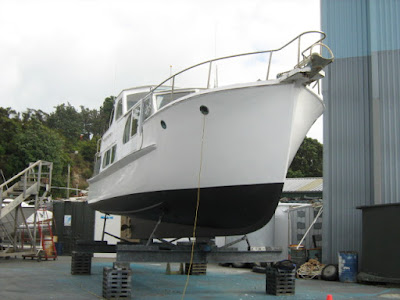 I was on the way back from telling the guys with the travelift that I was ready anytime that they were when I took this, all the sanding and primer, undercoats, filler in the dings, new zinc anodes, and two coats each of antifouling and topcoat all done. The prop and rudder buffed and coated, the through hull fittings dismantled and checked, reassembled and in one case replaced, quite a mission in what was really five days.

The travelift had my ship back on the water at about 11 30 this morning, the weather forecast was seriously awful, there was a high wind warning and an expectation of very heavy rain which means poor visibility and high seas.
There is a cyclone not far out to sea from here, and we’re getting the tail of it, so as soon as I was in the water I was out of the marina and put the hammer down.

When I bought this old lady I was told she’d do 10 knots.  At that time when I tried  to run the engine above half throttle I got a smokescreen worthy of a WW2 destroyer escort in a battle, for years she’d been run at her berth once a week at just above idle to keep the batteries up, but no load on a diesel is not good for them, the engines bores get glazed and the a diesel wont run well after that sort of treatment.  I’ve been running her at higher and higher throttle openings each time I’ve been out, and trying for longer runs rather than  just short loads. That plus a special oil additive in the sump.
Andy from “The Engine Room” a marine engineering and engine supplier tells me that’s the right procedure, so today when heading home, with a 30 knot plus tail wind and quite big seas behind me I pushed the throttle well open to get the speed up to where the waves were not overtaking me, mainly to maintain control but also for comfort.
I don’t have a log (speedometer) in this, or a GPS, so have to calculate the speed on either time over a measured distance or by estimating the distance aft to the stern wave and doing the calculation that Naval Architects use for hull speed.
Yup, 10 knots on both.  Clean bottom, polished propellor and the engine working as it should.  That is really stomping along for a boat like this, BIG bow wave, lots of foam in the wake and and trimming stern down a little.
Quite exhilarating!

Oh, and no smoke from the engine!

So I made it into the river before the weather really cracked up, the wind is up to maybe 40 knots and building, its raining hard, and as I write I’m anchored in the river waiting for the tide so I can get up to my dock. It lacks but an hour ‘til slack water, I don’t want to have to deal with both the wind and the current when docking on my own so will wait.

Its nice to have the job done, now for the cabin and deck paint.

PS.  Its two days sine I wrote this. I was in Norsands boatyard in Whangarei yesterday, visiting Annie Hill to check out her project, and yes you’ll get a report on that in a day or so.  I ducked into the office and got them to work out the charges for a haulout and a week on the hard, plus waterblasting the bottom.  Just under half the cost of Gulf Harbour Marina!  That plus they allow liveaboards to stay on their ships up on the hard for a small allowance,  and I mean small. $14 a week.  That covers the showers and restroom use. Most reasonable.
Its about an 8 hour run up the coast from here, quite a nice little cruise.
Guess where my next haulout will be!

Well, actually I am really hoping that Pam and George up at Whangateau Traditional Boatyard can get their cradle rebuilt, that would be my preference, they deserve all the support that they can get.

Posted by John Welsford at 3:53 PM