A complete boat this time, not just a frame. Still in Chile.

The travelling boots have been doing a lot of exploring,  I went with them of course, it wouldnt pay to let them go by themselves, you never know what sort of trouble they’d get into.

We’ve had some issues getting from Puerto Montt south to Punta Arenas, and in the end bit the bullet and have booked to fly there, and when we’ve done the work we’ll fly back to Santiago.  The first available flight was Friday, its Tuesday today so Howard, the boots and I have been exploring the Austral Highway to see what we could find.

And what did we find?  Stunning scenery, forest clad mountains dropping precipitously into the sea, the road clinging to the cliffs around the headlands, groups of tiny houses behind little bays, fleets of near identical open fishing boats anchored off and more hidden in the creeks and behind sandspits. 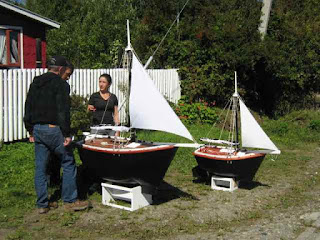 We came across these, they're decorative rather than sailing, but interesting and that deep bellied broad beamed shape seemed very consistent with the shape of the very few full sized ones we'd seen. But look below,  we found a real one!

The really serendiptitous discovery though, we having an interest in boats and sailing in the deep south of Chile, was a big traditional sloop rigged sailing boat sitting in a paddock. 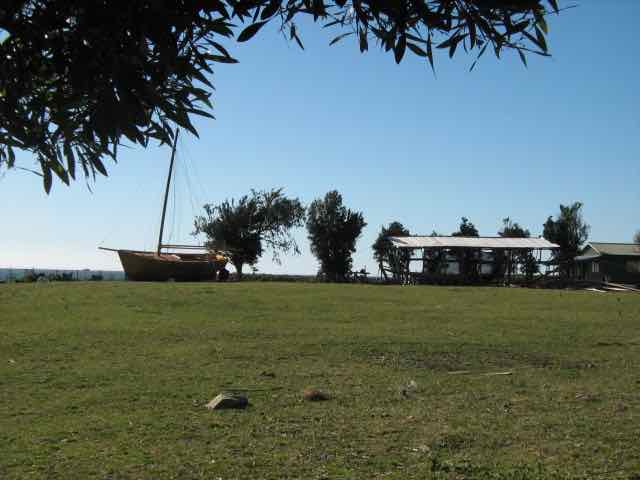 The view from the road.   The sea shore is literally just beyond the edge of the grass that you can see. This boat will be winched along the grass, turned at right angles and dragged down the beach by a tractor, then left until the tide comes in to float and sail away.  They're exceptionally rugged little ships, designed for just this kind of use.
The shed on the right is where the next one is being framed up, and to the right of that are classrooms.
Wouldnt you like to spend some time there with an adze and a hammer!

We pulled over intending to look over the fence,  the boots  though decided that they’d walk me over there to have a closer look and while they carried me around to take photos Jaime the owner came over to see what we were up to. 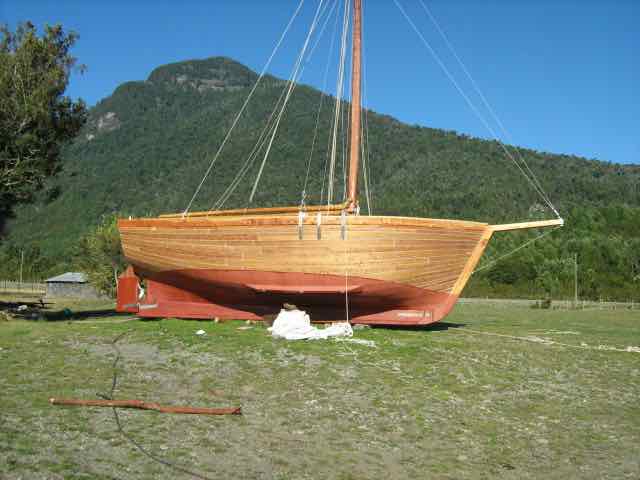 Shes about 35 ft by perhaps 14 ft, I'd guess at 10 tons, ballasted with rock stowed in the bilges, no interior to speak of but a big cargo hatch in the deck.  You would either sleep on deck or up in the bows below, take some padding, there is nothing there except boat.
The rig is gaff sloop, Jaime having hand sewn the sails from medium duck canvas with 3/4in manila rope boltropes.
These boats carry a crew of four when racing, but two when working for their living.
Yes, this one has a motor, but thats unusual.

It turns out that not only had he built this little ship, typical of the small coastal service vessels that carried passengers and freight in this area, he is in the early stages of starting a school that teaches traditional boatbuilding, and he himself is the champion racer of these little ships. 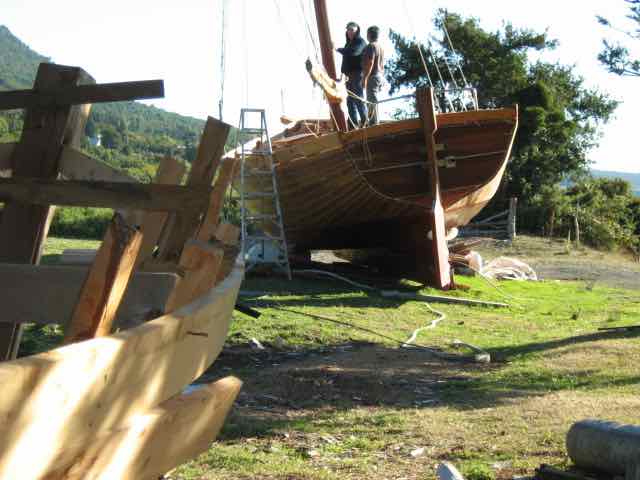 A view from inside the shed, thats the next boat being framed up just to your left, with Jaime and Howard up on the deck of the completed ship, that gives you an idea of her bulk, she's a serious carrier for her length and well adapted to the conditions that prevail on this rugged coast.

He and Howard had a very animated conversation, one speaking Spanish with a few words of English, one in English with some Spanish, a lot of gestures and pointing.  Jaime went and got a diploma given to him by the Armada de Chile for his rounding of Cape Horn in a 50 ft or so yacht, and Howard got out his laptop and pulled up the photo of his similar diploma.  Instant brotherhood. 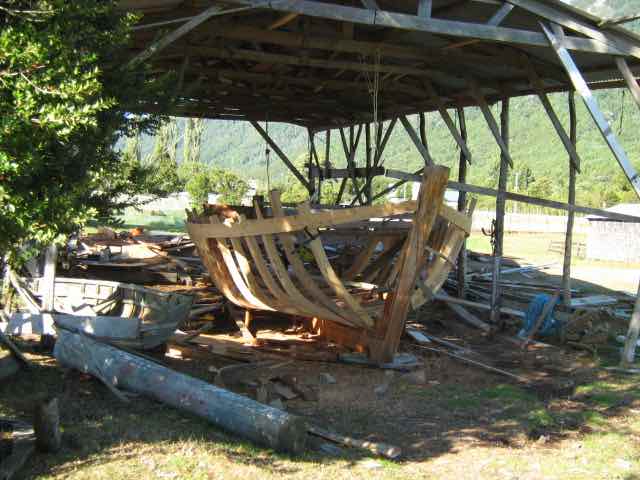 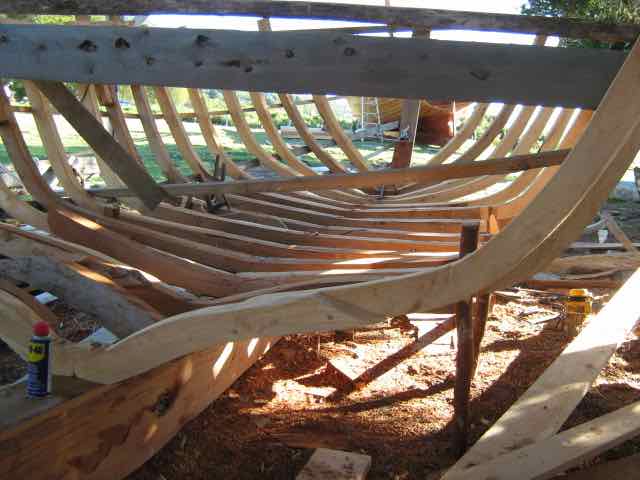 Jaime has issued an invitation to Howard to come back when the racing is on in September to become one of his crew, and stay in his casa.  ( “house”. I’m learning Spanish.  Banos, that’s the word that you should learn after please and thank you.)
Howard is planning to do just that, the racing is just before Howards voyage comes up, and he'll be in touch with Jaime with a translator to help bring the new friendship along.

What a coincidence, a really interesting boat, boatbuilding the way it was done, a boatbuilding school, a really nice guy and and new friend. We’ve got his contact details and hope to keep in touch. 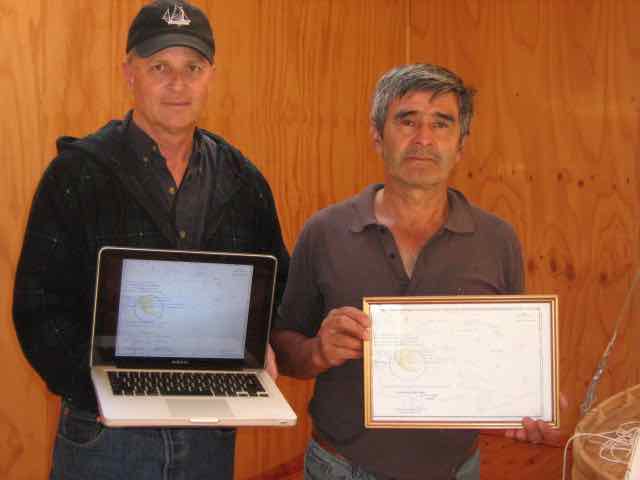 Jaime Gallardo and Howard Rice comparing notes, Howard of course rounded Cape Horn in his Klepper Kayak some years ago, was awarded a certificate by the Armada de Chile, and it turned out that Jaime had done the same rounding although in a yacht of about 50 ft long, and had the same certificate. What a coincidence, great stuff.

We’re in Hornoperin right now, I’m sitting up in bed in a tiny room upstairs in a “Hostel”.  This is a lovely little town,  it’s the end of the road,  the next stage going south is a very long ferry ride through the northern end of the Chilean Archipelago.  This is backpacker paradise, the scenery is beyond amazing, the town is supported by aquaculture which is big business here and tourism.
Great place.

Meanwhile, the brothers boot are telling me its time to go for a walk, so I’d better take them out. The footpath is calling.

Posted by John Welsford at 4:41 PM