Its been a real scramble the last few days so I've not been able to post, but its catchup time.
So here is a short post and some pics from our days in Punta Arenas.

Punta Arenas, what a place.  The people here have been unfailingly friendly and helpful, that means that we’ve solutions to most of the logistical issues that we came to sort out, will be seeing the Regional Commander of the Armada De Chile tomorrow, and when we’re back in Santiago have contacts within the Chilean Tourism beaureau to go and see.
So we’re able to take a few hours to see the scenery, talk to people, explore a little and relax.

The scenery is bleak but has a real beauty about it, the town has grown enormously in the past couple of decades and is now a tourist center with some industry as well as a lot of sheep and beef farming, its windy, cool, and the town itself has some wonderful architecture backed by the deep blue grey of the Straights of Magellan and the mountains.  Nice place, we enjoyed our time there, made friends, had a very successful meeting with the Armada de Chile, and are very much looking forward to our next visit when Howard pushes off and sets his course for the south.

I’m doing a lot of filming with the video camera, remember that part of the reason for the trip is to get background material for the full scale video that will be made of Howards adventure. This means that the still camera hasnt been in use as much so Im short on pics. But for those who were interested in the fishing boats, I've got some more from Porvenir on the other side of the Straights.

Don’t forget that this will take more than a few bucks to produce this, so please consider supporting this, it’s a way of ensuring that you can both be a part of the experience.
Beyond40south.com

The Boot brothers have been doing a lot of walking, I go along with them of course, they have a real tendency to get into trouble if I don’t. But Lacey, ( he’s the lefty of the twins) told me yesterday that his brothers name was really “Toe”. When I asked why he said it was because their mother didn’t want people to think that he was a “heel”.  “Toe” told his brother to “hold your tongue”! 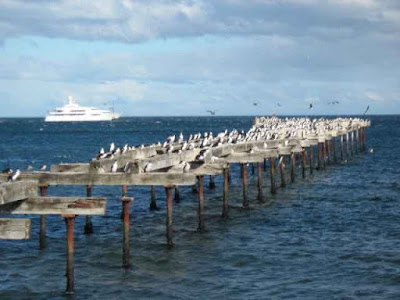 A superyacht at anchor beyond an abandoned jetty, the birds are all leaning hard into the stiff wind that prevails here. 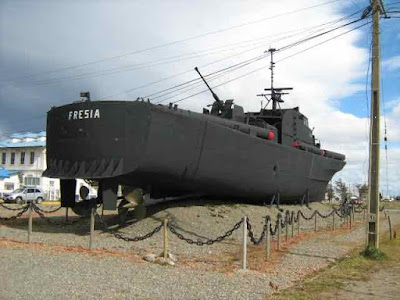 One of the old torpedo boats that used to patrol the southern area of Chiles coast, I imagine that life on board would have been very hard.  But look at the size of those propellors! There is serious horsepower in there. 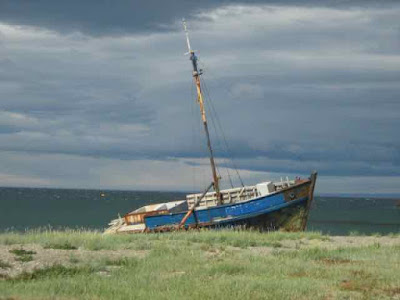 The wooden fishing boats are built very cheaply, absolutely no frills, this is the way that the "real" boats were built in the past rather than the way the seriously expensive replicas are built today. This one has come to the end of its life, its had the engine and refrigeration hold removed, and has begun returning to nature.  Its not an uncommon sight here. 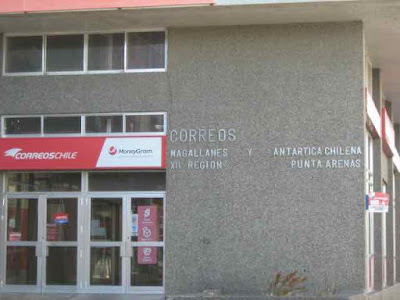 The post office, note the area covered by this office! 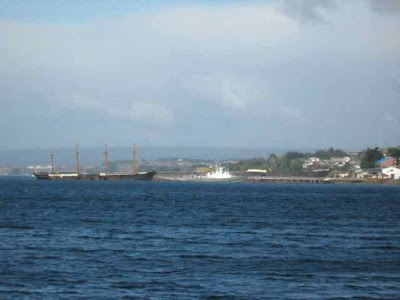 Derelict Cape Horners, they're being used as a breakwater, a sad end for proud ships. 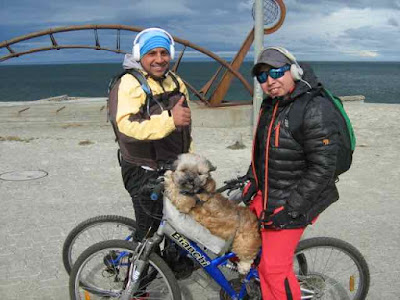 I love my little dog, he's my best friend and we go for a walk almost every day, in fact if we dont he makes sure I get reminded.  Forcefully! But I used to ride a bicycle for excersize, and this gent and his doggy friend have found a way to make it a team effort.  The dog is lying on a cushion strapped to the bike, has footrests for his back feet, and a safety belt.  He's a happy chappy, loves the ride.  Nice work team! 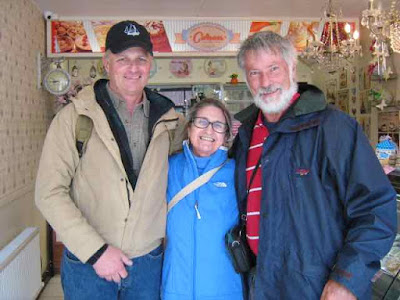 Posted by John Welsford at 9:11 AM