Its warm and cozy working in here at the drawing board

But the workshop is ok too, at least in the afternoons when things have warmed up a little.


With the winter weather having arrived in spades its nice to be inside working on the  drawing board, and I’ve a lot of work to do there so perhaps the inclement weather is a good thing.
But now and again its good to be able to stand up, straighten the back and go up to the workshop to spend a little time with tools in hand.

This morning I cut the panels that will become the bottom of Long Steps, planed the scarf slopes and glued the three pieces together.  Long Steps being as long as she is the panel is a bit more than two sheets of ply long, so two  8/1 scarfs are required.  It took me all of about 20 minutes to do this, and I mention that because I know a lot of people are a bit apprehensive about making scarf joints but when you have done one or two you’ll find that its easy stuff.

In this case I marked across the ends of the sheets at 72 mm back from the edge, that’s 8 x the thickness of the 9mm plywood, stacked the two pieces up and secured them with a clamp on one end  of a cross piece set back enough to be clear of the work area, then put a couple of long screws through the other end.

Mask and ear protection on, out came the power plane, the one with the tungsten knives in it, and half a dozen careful swipes removed the bulk of the material.
Then with a dead sharp hand plane the slope was completed, cut back to the line, straight from the top to the tip of the slope, the glue lines showing where any bumps or hollows needed to be trimmed out, and that’s it.

Next, the panels have been placed upon some lumber, all the same thickness, to support it straight and level, some kitchen wrap placed across the support boards under the join so everything doesn’t get glued together in one big lump, and a string line established to line up the pre marked center line of the three pieces.

Glue mixed up, both sides of the joints primed with a thin mix, then some more microfibers mixed in to thicken it to about peanut butter consistency, and the joints “buttered up”.

Lined up, each piece put into place and eased together until the lines across match and the stringline lines up with the marks, more kitchen wrap, a piece of nice straight lumber set across the joint and some weight applied. 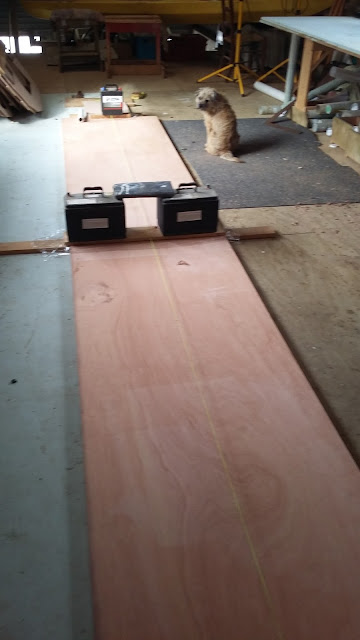 Thats a big panel, 800 wide, nearly 5 1/2 metres long. its brought home that this is a bigger project than any I've done for a while.
I had to change the engine batteries in my ship a couple of months ago, and thought that I'd just go and trade them in at the scrap yard. These big batteries are worth about $15 each, but they make darn good weights for jobs like this so they'll be around for a little while anyway.
Theres Dennys little dog Indy, he thinks he's my helper, my own dog is down on board the ship curled up by the heater.  Sensible dog.

Done, leave for 24 hours and its as good as a single piece.
There will be a little sanding done to level out any glue squeeze out, I prefer to slightly over fill these joints as the end grain of the plywood tends to soak some up, plus I do rely on the gap filling abilities of the epoxy glue rather than my ability to produce perfect joints.

My next job will be marking out the panel from the offsets I’ve picked up on the plan, and as with some of the other parts of the boat this gives me a chance to correct any “offs”  in the “offsets”.

But that comes up on Sunday, and by the time the next blog posting here comes up I hope to be building the building jig.

And, caught up somewhat with the  new design that I’m drawing. 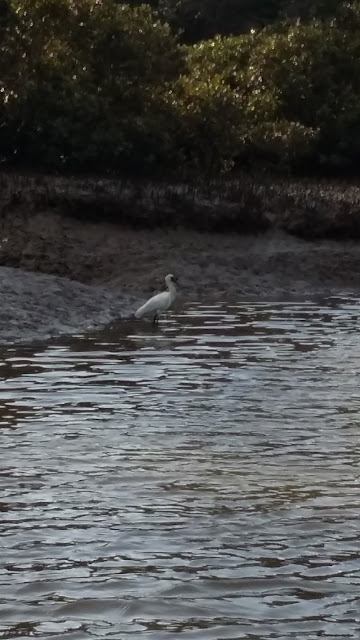 Posted by John Welsford at 7:42 PM