Springtime weather and other stuff. Long Steps progress, sailing SEI at last, and a nice blog to read.

Its raining.  Not a howling horizontal fire hose kind of rain like yesterday, or a misty just enough to get you wet before you realise it but an honest, steady soaking into the ground to get the spring growth going kind of rain.  All day.

I’ve spent the morning in the workshop cutting holes in my boat, making the openings for some of the 6 screw ports that will give access to the compartments under the side seats in the cockpit of Long Steps.  There are two compartments at the forward end that are divided off from the rest of the volume, those access from inside the cuddy, and I’ve put a port in each side which gives access from the open area of the cockpit at the after end.
There will also be a port in the seat tops about halfway along.  Why so many? These are long spaces, and its really frustrating to have something roll so far in that I cant reach far enough to get it.

There will be more, two in the cuddy floor, one in the cockpit floor to access the space aft of the ballast tank, and one in the ballast tank itself so I can reach in to undo the filling and draining bung, and to make an opening so I can fill the ballast compartment with a bucket, then put the port in to seal it.

Each one of these has to have a fairly close fitting hole made in the bulkhead or cockpit floor, has to have a doubler fitted behind it to ensure that there is thickness enough for the securing screws, and to make the edges of the opening stiff enough that it cant bow or buckle under the pressure of the fastenings.

That was a mornings work, leisurely work, but work.

I also started on some of the fittings.  The rudder gudgeons bolt through reinforcing pieces glued and screwed to the inside of the plywood transom, total thickness close to 30mm, and those pieces are connected to and braced by other structure in the stern compartment.  I DON’T want the rudder to come loose, so for insurance, plus making sure that water cant get at the plywood end grain I drilled the holes for the 8mm stainless steel bolts that will hold the fittings, then got in there with the little router and counterbored those holes in about 20mm at 20mm diameter, then with epoxy glue mixed with a little bit of microballoons to prevent the mix from running out, I piped them full of mix, forcing the epoxy right through the original holes as well.
I’ve over filled them so they’ll sand off flush, and will when the mix has set hard, redrill the holes.
Why?  Strength plus if I hit something hard with the rudder the shock loading wont disturb the epoxy enough to allow water into the plywood end grain.
In addition to that, each bolt will have a large section neoprene “O” ring between the transom and the fitting, said “O”ring being coated with Anhydrous Lanolin.
I’ll make a countersink in the epoxy, enough to seat the “O” ring about half its depth into the countersink, and when its compressed it will be a totally watertight fit on the bolt, the fitting and the transom.
I took two half days “off work” this week, off the engineering work that is, rigged little SEI on the first day, then was sitting watching the miserable misty rain and the very brisk wind on the estuary thinking, well, you all know the words, when a missive arrived from my friend Paul who lives just down the river a couple of miles. He asked if I was going to sail the boat today? Should he bring his camera?
Ok, it was about 15 minutes shy of high tide, there was a tiny hint that the rain would ease and being honest the gentle indirect light was near perfect for photographer Paul to work his magic.
By the time he arrived I had the boat rigged with a reef tied in, she was slid off the dock and into the water and I was away. 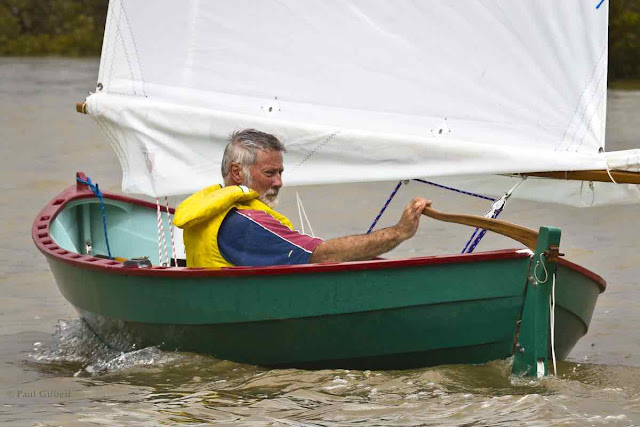 The worried look was not justified. She is stable and felt steady even though the weather was not what you'd normally want on the day you sailed a brand new design for the very first time.


She has nice balance, accelerates well, steady and stable, carried that reefed sail in gusts of more than 30 knots ( Metservice official stats said winds up to 45 km H at about that time), she tacked reliably, tracked well and pointed up well.


The sail by the way is from RSS Sails, its an "OZ Racer sail"  very well made, sets perfectly, seriously well priced, available here http://reallysimplesails.com/ or from www.Duckworksmagazine.com 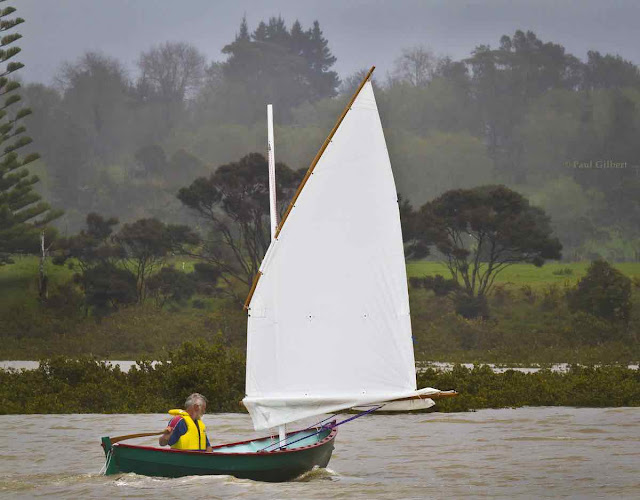 Off downwind, this stretch of river is not wide enough to allow big waves to build up, but the wind is channeled along the length of the reach by the high hill on the other side from the view here.  It was blowing hard, SEI was not in the least bothered by it/ 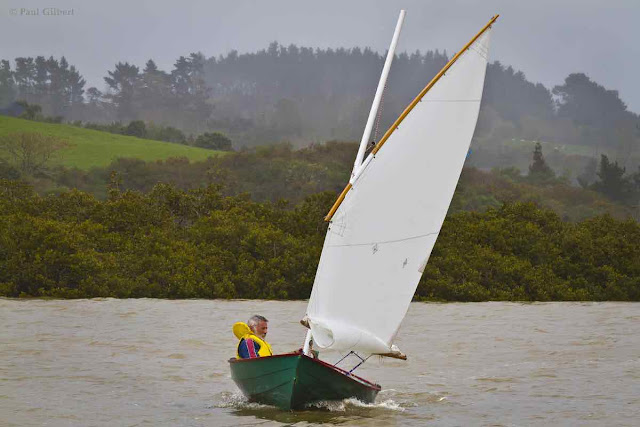 The wind had eased a little by the time this pic was taken and she was about powered up right for the strength of the breeze.  I sailed her in very light winds next day, the river being like a mirror with a few tiny ruffled patches I was coasting from one tiny puff to the next under full sail. All good. I took her out on the midnight tide last night, there is really only water to sail in for around an hour at the top of the tide and the moon was out, so I slid her off the dock and went out down the river a ways.
I might just do that more often.

I'm pleased too that Paul took pics, he’s better than good with that camera, Paul Gilbert! Photographer. Remember him if  you want pics at a special event.

Every now and again I get an email from someone who’s built one of my boats that really lifts my spirits.  I got one yesterday from Ryan and Chris about my little “SCRAPS” design, a tiny yacht tender, built from whats left from other projects, hence the name.

If you scroll back a post or two you’ll find pics of the build as well.  Nice work people, thanks for keeping me posted and thanks too for permission to link from here.

Posted by John Welsford at 9:33 PM