A good cup of tea.

A good cup of tea is very hard to come by when travelling.  Its not easy here in NZ either, the restaurants worldwide seem to revel in making the worst tea possible A cup of lukewarm water with a teabag on the saucer will at best make brown water that tastes like mud.  They say that they don’t sell a lot of tea, its not hard to figure out why.

I got home to my ship after being in Punta Arenas and Santiago Chile for 5 weeks, ( got a good cup of tea at the hotel Cabo de Hornos by the way, the manager there is a German lady and likes things done properly, well done ) and came home to find, no water. Plenty around the boat, but none in the taps.
All the usual noises when the taps were turned on but not even a dribble.

Ok, fill the tanks, I’d had guests on board while I was away and just assumed that they’d been generous with the shower, put the hose in for an hour, those two fresh water tanks are about 300 litres each so it takes a while.

The fresh water pumps are down in the engine room and that’s under the main cabin floor, I have to roll up the carpet and uplift the floorboards to get to Mr Fords home, so I left it for a couple of days while doing some other chores.

When I did venture down there “hola!” ( I’ve learned some Spanish while away) Water! Lots of it.  Ventured a taste? Fresh water!
The stuff outside being salty, it could only have come from the water tanks.

Ok, what next.  No the bilge pumps would not work. Plenty of current in the batteries, so off I went and bought a small Rule bilge pump and some hose, connected directly to the main battery bank, pumped her out, then had a look at the mess down there.  Oil everywhere, the water had been above the oil dipstick hole.

First job. Oil and filter change in the engine. That’s a fairly major job and involves pumping out, then replacing 26 litres of 30 grade diesel oil, not multigrade, so its not an off the shelf item.  Off into town, just made it on Friday afternoon before the guys closed, but then got stuck in rush hour traffic.  It took 2 hours to get home which did not see me feeling tranquil and serene!

Saturday morning,  the engines running again, check the oil several times while Henry rumbled away, no sign of cloudiness, same with the big hydraulic gearbox, but I did grease all the bearings on the driveshaft and the stern gland, just in case.

Next, the pump.  I took it out and aha! The fitting on one end had gone brittle and had cracked, that had let all the water in the two tanks, plus all that I’d put in since, out into the bilge.

Next, the pump had inlet and outlet spigots for 10mm id hose. The hoses that fed and received the water in that line were half inch, as were all the fittings for those hoses.  Whoever had fitted this little in line pump had made up some interesting little plastic adaptors, which had gone brittle and literally fell apart in my hand.

So, off to the boat parts shop, found a pump about the same size, shape and capacity, checked that it was the right voltage, got some new hose clips and went back to the oily mess in the engine bay.

No I couldn’t get the electrics to work, no I couldn’t get the old hoses to clamp onto the non barbed fittings on the new pump. So by then I was about done and went off to the hot pools over the hill for a long soak, got takeout Roganjosh and rice from the Indian restaurant along the way, no water in the galley makes cooking a chore.

Today.  Got the multimeter out, after several hours of messing around, found where the problem was.  It was automotive wire in a marine environment, there was corrosion for about 50mm in from the end of the wire, and of course with that clipped out the wire was too short.

Ran new wire, about 4metres of twin core, had to lift floorboard which meant moving two lockers, which meant moving the double bunk, then had to reach in under the galley bench to thread it through bulkheads and frames.
Got that working, tested it, then ventured back out to find some new hose that age had not made inflexible, and a pump with pipe fittings closer to the half inch hose fittings that make up all of the internal fresh water plumbing. Bear in mind that New Zealand saw the light way back in 1967 and converted to metric measurement so imperial measurement fittings are hard to find.

But I found a 12mm in line 750 litre an hour in line pump at the fourth place I called at, even found some 12mm pvc pipe and took a chance that if I put it into boiling water for 5 minutes it would stretch enough to make the difference.
I bought that plus the pump, damn the price, by then I just wanted the job done. Came back home to where the gale force winds blowing here at my dock had the ship bouncing around pretty energetically, bent myself up like a paper clip and got into the confined space to fit the new pump, wiring, hoses and clips.

It all works now.  The first thing I did with my now fully functional galley tap was to make a cup of tea.

It’s a good cup of tea, Twinings Irish Breakfast, made in a proper teapot, pre warmed, and brewed for three minutes.

I think I deserve it. 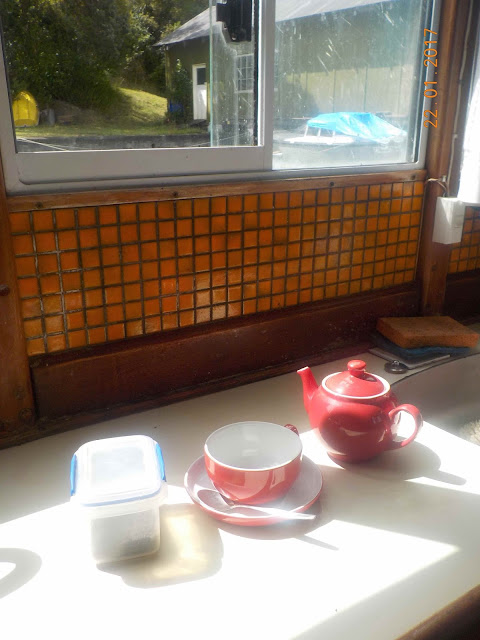 Posted by John Welsford at 8:16 PM