Getting back in the routine.

Its comforting in a way, relaxing and feeling somewhat in control. I find I like it, adventures of any kind are generally uncomfortable things, and lifes dealt me a few lately.

Today was a good start. Paintbrush out, working on painting the ship for an hour or so as soon as the dew is off,  then off out to do anything that I have to do “out”. Yesterday was a small engineering job fixing a return spring on a big crosscut saw in a lumber yard. Where do you get spare parts for a  machine probably built in the 50s?
Its now got a set of pulleys,  a big weight and some line connecting it all together. Pull the saw out and it lifts the weight, let go and the weight pulls the saw back in out of reach of the operator.
Not perfect, but they’re going to buy a new one when they move to their new yard in 8 months time.

So, back home, at the drawing board in the heat of the day, then out in the shed working on Long Steps in the evening.  After what lifes been like over the last while its nice to get back into a routine and make progress on all the outstanding jobs.

“The ship” is way overdue for her paint, when I get at her with the sander I find that she’s got probably 6 coats on her, some in Latex paint filled with granulated cork, that’s all the decks, and its letting water in underneath then trapping it so all that has to come off.  That’s a job for the big gas blowtorch, the stuff is quite plastic and its like trying to sand rubber so it’s the burner and the carbide scraper. Big job, so I’m just doing a bit at a time.

The rest of her is enamel paint, sandable, so I do a small area every couple of days, prime the area, (the grey) then put a prep coat over that, and when I’ve got the whole of one side of the cabin done I’ll think about the colour and when the decision has been made I’ll do it all in one go. A bit at a time is much less onerous than trying to do the whole lot in one go.
She’s been white, with blue decks but I’m thinking perhaps very pale blue on her cabin sides might be nice.

Drawing, I enjoy drawing, but of late have had some meds that made my hands shake, that’s all done now so I can get on with it. But I bought some ink cartridges for the Rotring pen, I draw on Polyester drafting film which requires a very special quick trying ink, and somehow or other the shop supplied the wrong ink, a small thing, but it was in the correct packet so I persevered. Had to do two major plan sheets twice and even then they werent up to standard.
Went back to the supplier, and got “ Oh dear, we knew about that but didn’t know how to get hold of you, we hope it didn’t cause you too much trouble” ( yeh right, about three or four days work scrapped) . Anyway, they gave me the right stuff and I’m away again.

Just to make life even more interesting, my computer was hacked a few weeks ago, I lost all my email, files, address book, sent files and everything. A lot of what I though I was sending didn’t go.
So if there is any one expecting me to communicate, please email again so I can put you back in my new address book.

But up there in the shed is a peaceful place, free of the troubles of the world. I was given a very sturdy windsurfer mast a while back, that’s going to be the mizzen for Long Steps.  It needs a square section on the butt end to fit the socket in the mast box, so I’ve been puttering around on the lathe, made a stub that fits into the end of the mast, with a square on the end.
There will be a packer on the mast at the top of the mast step box, I’ll just wrap that in fiberglass until its up to the right diameter, then there is a plug to go in the top for the halyard and some paint, and that’s the first spar for the new boat.
Progress, in the meantime the lathe has me covered in shavings. Not unpleasant. 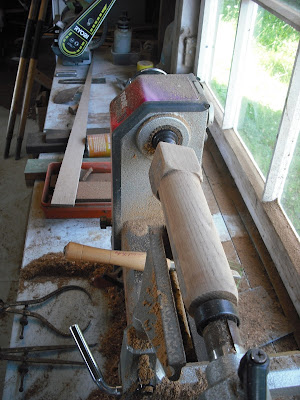 The lathe is a Nova 11, a little mini lathe which I like a lot, yes I've a bigger lathe but its 200 km away and this one is portable. Nice little thing, does most of what I want.
I've no idea what the wood is, a friend gave me a heap of well seasoned pieces and they've been very handy for odd jobs, this piece is quite hard, seems very strong, has no smell, and as it will be glued in and painted it should be fine. 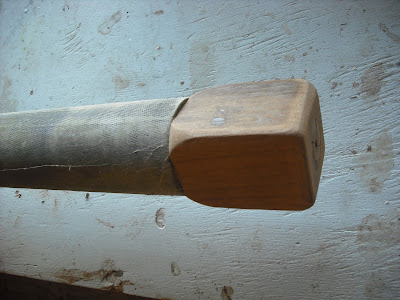 Posted by John Welsford at 9:05 PM