Adding to the tool collection.

We're having weather forecast that sounds really serious,  Tropical Cyclone Lusi is heading our way after battering Vanuatu, it brings sustained hurricane force winds plus extremely heavy rain.
Its been a dry summer here in New Zealand and we could do with some rain in these northern parts but not the torrential downpours that characterise these big tropical storms.
Tomorrow I'll be spending some time making sure that I am all organised for the storm, the new docklines will be doubled up, the tools and machinery raised up off the floor, the windows and doors all protected and the hatches battened down.

Back in my mid teens I worked for a while in a Joinery and Cabinetmaking factory where my mothers brother was working.  He’d been a carpenter who came “inside” to make windows and fancy cabinetwork.  North Shore Joinery was pretty well equipped, there was wonderful machinery everywhere!,
This was the second time I’d been in contact with heavy woodworking machinery, the first being at Philip Langs boatbuilding shed where my Grandad did the book keeping while I, at about 10 or 12 ran around being the gopher and tailing out machinery.
That shed by the way is still there, just up the road from where my ship and boatshed is. Its an auto panel shop now which is a sad comedown for a place where dreams were once made real.

Back at the joinery factory it was not long before they picked up that unlike the others I liked  machinery and within a reasonably short time my duties included tooling changes and setups, maintenance and adjustment of the various machines in the shop.
Life went on, I moved on, spent a while driving a shovel and a bulldozer, a while in the army, and so on.
But the love of the heavy woodworking machinery stayed with me, and years later I became a sales engineer selling, installing, commissioning and trouble shooting really big sawmill machinery, mostly planermills and the likes of band resaws, fingerjointers, laminating presses and so on.
I still work on woodworking machinery, am a maintenance contractor part time to a Saw Filing and machinery shop.  It helps pay the bills.

I digress, I am a bit of a collector of hand woodworking tools, last count when I looked, between hand planes, spokeshaves, drawknives, etc I had 44 items.
I added two more yesterday, both uncommon if not really rare.
The uncle with whom I worked way back then lives with my widowed mother, he’s 83 now and slowing down a lot.
When setting up the boatshed as a second workshop I’d bought from him (for “beer money”) a nice little bandsaw, a small jointer and a table saw.  They are doing sterling service now, you’ll see them in the background in the pics of what I’m doing in there, and I’m glad of them as there is no way I could spring to buying new or even second hand at the moment.  But the old gentleman has picked up that I have an interest in tools so when I was there yesterday he took me out into his shop and mumbled around hunting in drawers and cupboards for a while, pulled out two very original boxes and presented me with a Record compass plane and a Stanley router, both probably bought new in the late 50s or early 60s. 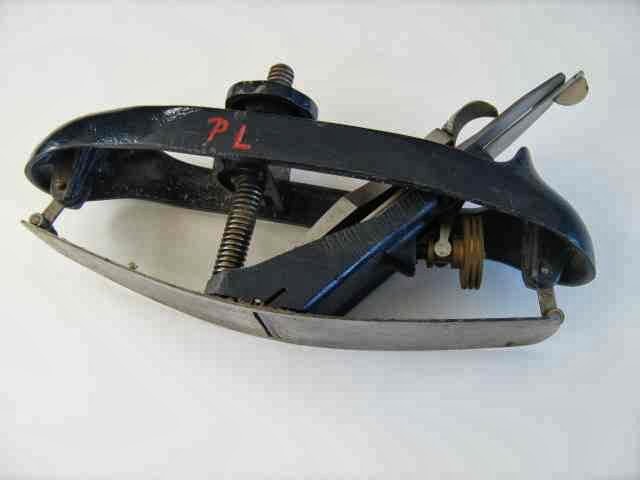 The plane, for those who are unfamiliar with them, has a flexible sole and a mechanism for forcing it into a curve so it will plane around the arc of a circle, both inside and outside.  Its useful if for example you are making the top sections of a gothic arched church window, or a large circular section such as a wagon wheel.  Today you’d use a power router and a template or a spindle moulder (shaper).  Old Pete did a number of church windows, for the last few years before he retired in his mid 70s he had his own little workspace in a separate building out the back of the factory and built the likes of a wooden spiral staircase with no center pole, a large wooden rose window for a Cathedral and an extraordinary lecturn, all swooping curves and rounds, for a university lecture theatre.

On that staircase, it’s a pretty amazing piece of work and the church now tells a story about how a man walked into the church and offered to build it, that he was divinely inspired, and that no one to this day knows where he came from or how it was built. They claim it as a minor miracle if you like, but the truth is that the Pastor in charge had asked Petes boss if it were possible to put a staircase in the space. Pete and old Sam the boss had gone and had a look, and Pete had built it. Normal commercial work for money, the result was pretty special but no miracle, just a skilled worker with the time and experience to do the job.

But by the look of it neither the compass plane nor the hand router were ever used.  The plane still has its shipping grease on and neither have ever been sharpened. In both cases the soles still have the original machining marks on them.

Oh yes! For most readers the word “router” in terms of a woodworking tool will mean those electric things that make loud screaming noises and cut more wood away than you planned!  But had you thought of what its predecessor was, the one that did not have to be plugged in (the true cordless machine, powered by elbow grease)? 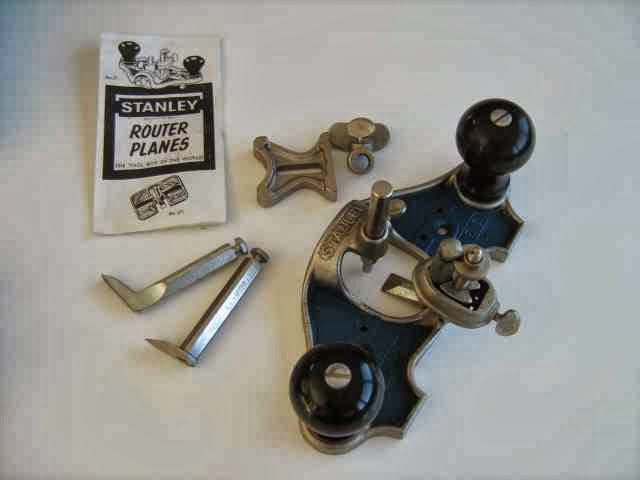 This, in the photo is a router, sometimes referred to as a “Grannies tooth”.  Its for cutting away material below the surface of the wood, great for rebates but today I use mine when doing high relief woodcarving where material has to be removed to produce a raised area to be carved into whatever that stands clear of the background. It’s a nice, peaceful tool to use. I had three, various sizes, now have four including a really nice new one so can retire the sad old mid sized one that I’d picked up in a junkshop.

Thanks Pete, they’re in good hands.

Posted by John Welsford at 6:14 PM