SEI is progressing, I will be able to spend a couple of hours a day on her for the next week or so before other things get in the way again. Its clinic visit then and that will slow things for a few days.
In spite of a very friendly and competent staff I really don’t look forward to those visits, but hey, it would be worse without.

SEI!  The frames are all up, I’m reminded that I need to put  more permanent markings on the components when I epoxy coat them so I can get the levels and positioning right, I’ve had to remeasure the bow stem and mark it again but otherwise the frame has clicked together very well, looks fair and the boats shape is becoming apparent when viewed from ahead or astern.
The daggerboard case is in place, that holds frames three and four together, one and two are positioned by slotting over the stem, six and seven over the stern stem and five is braced forward and aft to the sub assemblies ahead and behind it.
As the bracing, (rather than good lumber I’m using pallets sliced up for all of the parts that will be surplus when the boats all done) goes on the assembly is becoming stiff and strong, it has to be able to stay exactly in place when I wrap plywood and stringers around it.
The next stage from here is to put the seat riser ( support) stringers in place, that helps keep the frames in position as well as performing its seat edge job later on when the hull is upright and the interior being fitted. 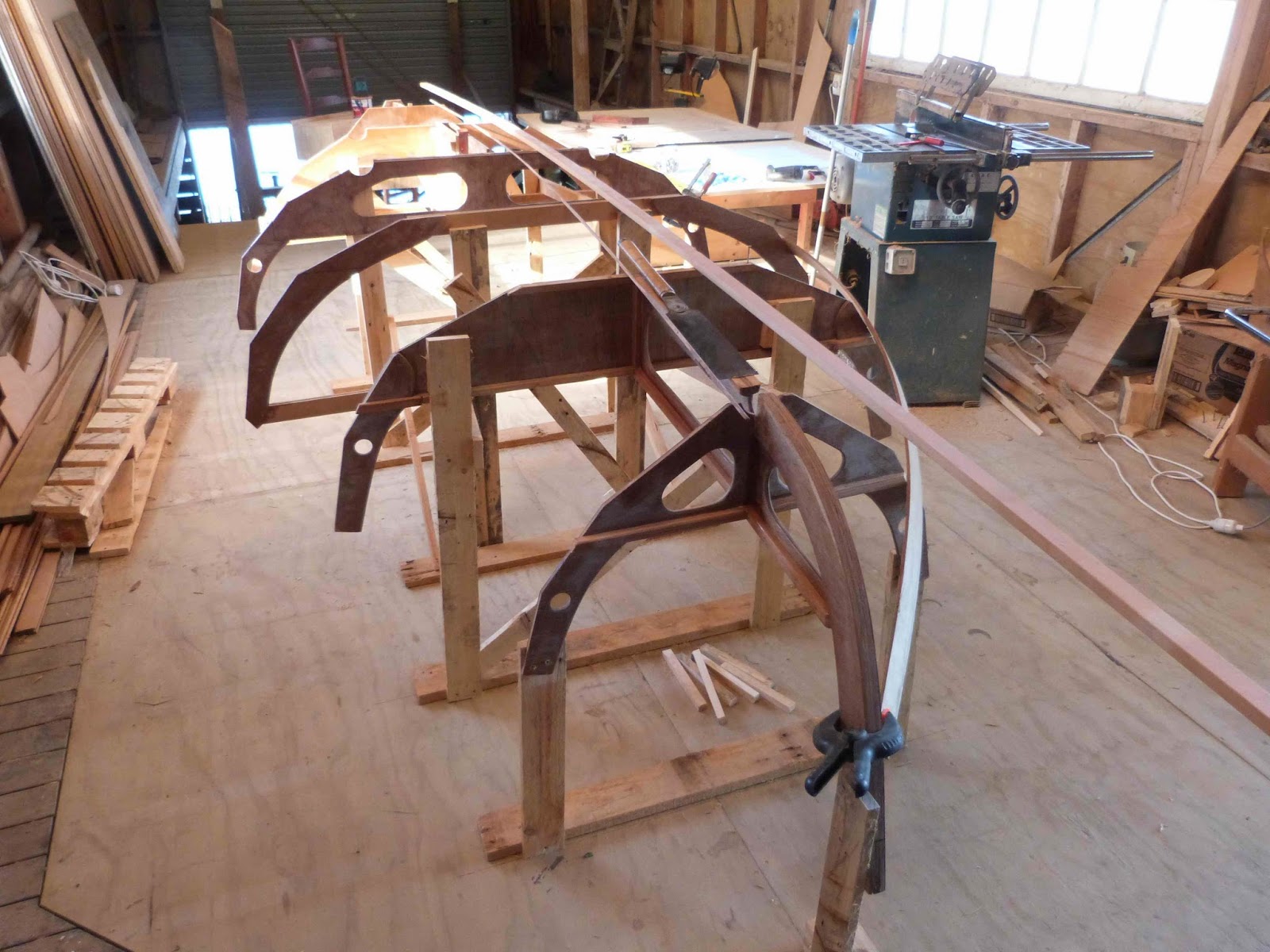 The light from the big windows is lovely to work in, and warm in our winter which is just beginning to cool off, but its not good for photography, you can see enough here I think to pick up how the boat is put together. Its an exciting time watching the shape take form.

As mentioned before the Makita laser cross level has been a boon, I’ve usually used a string line, carpenters level and plumb bob and that does a good job, but the laser really speeds things up, so easy.

As always I’m trying to use existing materials, cost is always  a bother so I’m utilising some leftover material from other jobs. So those of you who are building SEI, ( off in the future ), when you see me do something a little different, please bear in mind that its sometimes  “do as I say, not as I do”.
In this case the end logs for the ‘case are as per plan dimension but are hardwood cut from the bearers on one of those pallets I mentioned in the blog a while back, and the seat riser stringers are leftover strips from a birdsmouth mast, they’ll be just a tiny bit undersize and I anticipate having to brace them across to keep them to a fair curve. This wont be the case if you use the size specified on the plan. 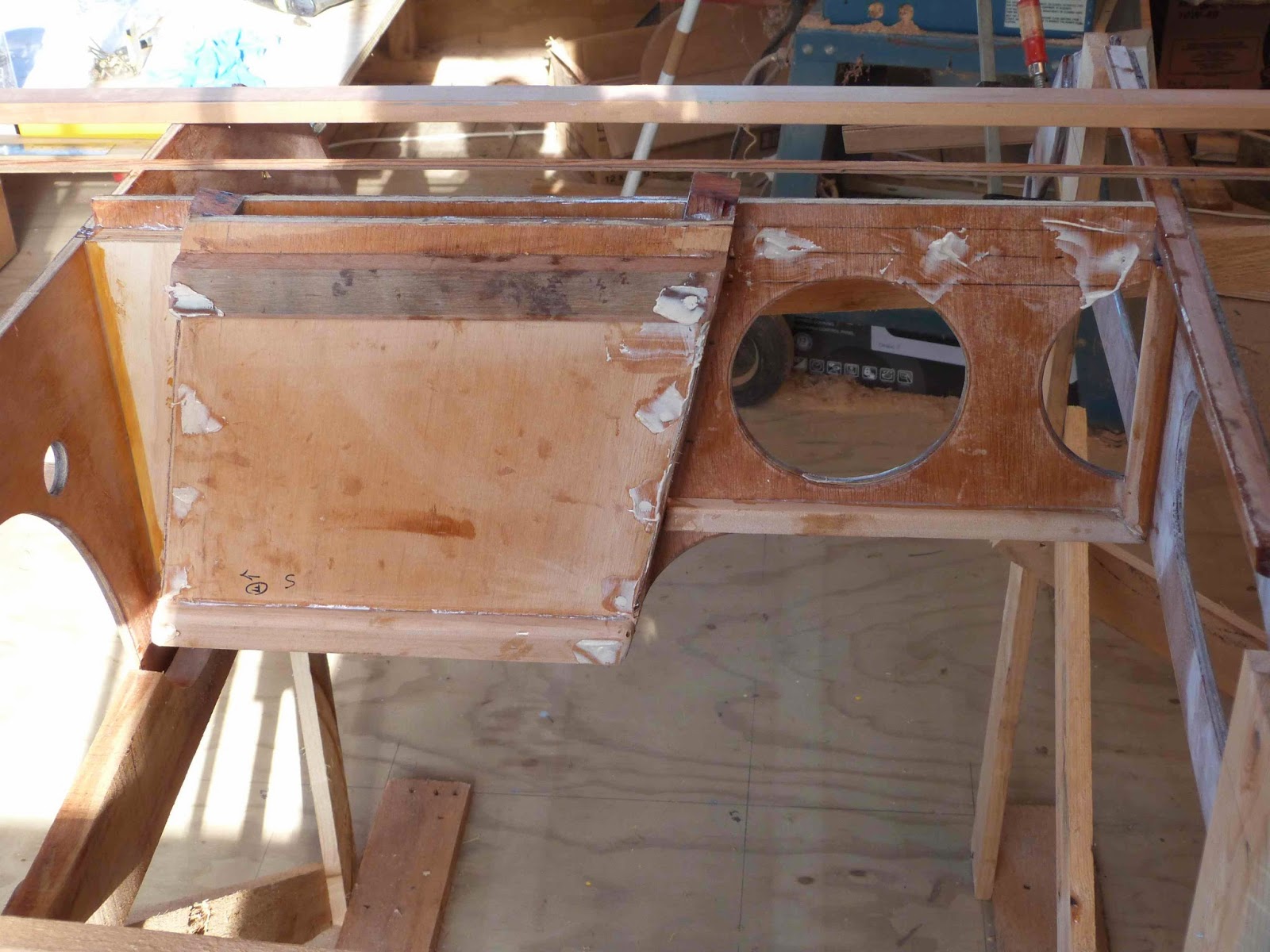 The daggerboard case in place, I'd normally sand the filler covering the screw heads smooth before installing the component, but this will be easy to do if I get to it before the bottom panel goes on. Note that the 'case  is long enough to fit right through the bottom panel and that panel sits on the "log" along the sides. I'll trim the excess off once the 9mm plywood bottom is in place.

More on costs.  Aussie designer Mik Storer has a deal going with some sailmakers he knows, and is having a small range of very nice balanced lugsails made at extremely attractive prices, these are available from him or from www.duckworksmagazine.com as well as directly through him in Aussie . The smaller of the two is very close in dimension to the sail plan I drew for SEI and I’m thinking that it would work well, so, like a lot of things I write about, “watch this space” for a sail test.

A bit more on costs ( again) , one of my small boats recently cost its builder a staggering sum, I’d not long before built one to a pretty high standard of finish and fitout for just under 25% of his cost.  Now I am pretty good at searching out bargains, know where I can save a buck or two, will make things that some people will have to buy so can trade time for money and have a heap of scrap in the corner of the shop which also saves a few dollars.
In this case though the boat had all new fittings, rigging, sails and was on a brand new trailer so the comparison was very close to apples for apples.
Its got me thinking about costs, and I think that the serial boatbuilders like me have a considerable advantage in that we quickly build up the knowledge about how to indulge ourselves in our passion without denting the household budget too much.
Talking with friends about this, we’re thinking of working up an article on this subject. I’ve done some in the past and they’ve been posted on Duckworksmagazine but its past time I did it again.

Back to SEI, The next step is to scarf up the bottom panel and fit it around the daggerboard case, then glue it in place. 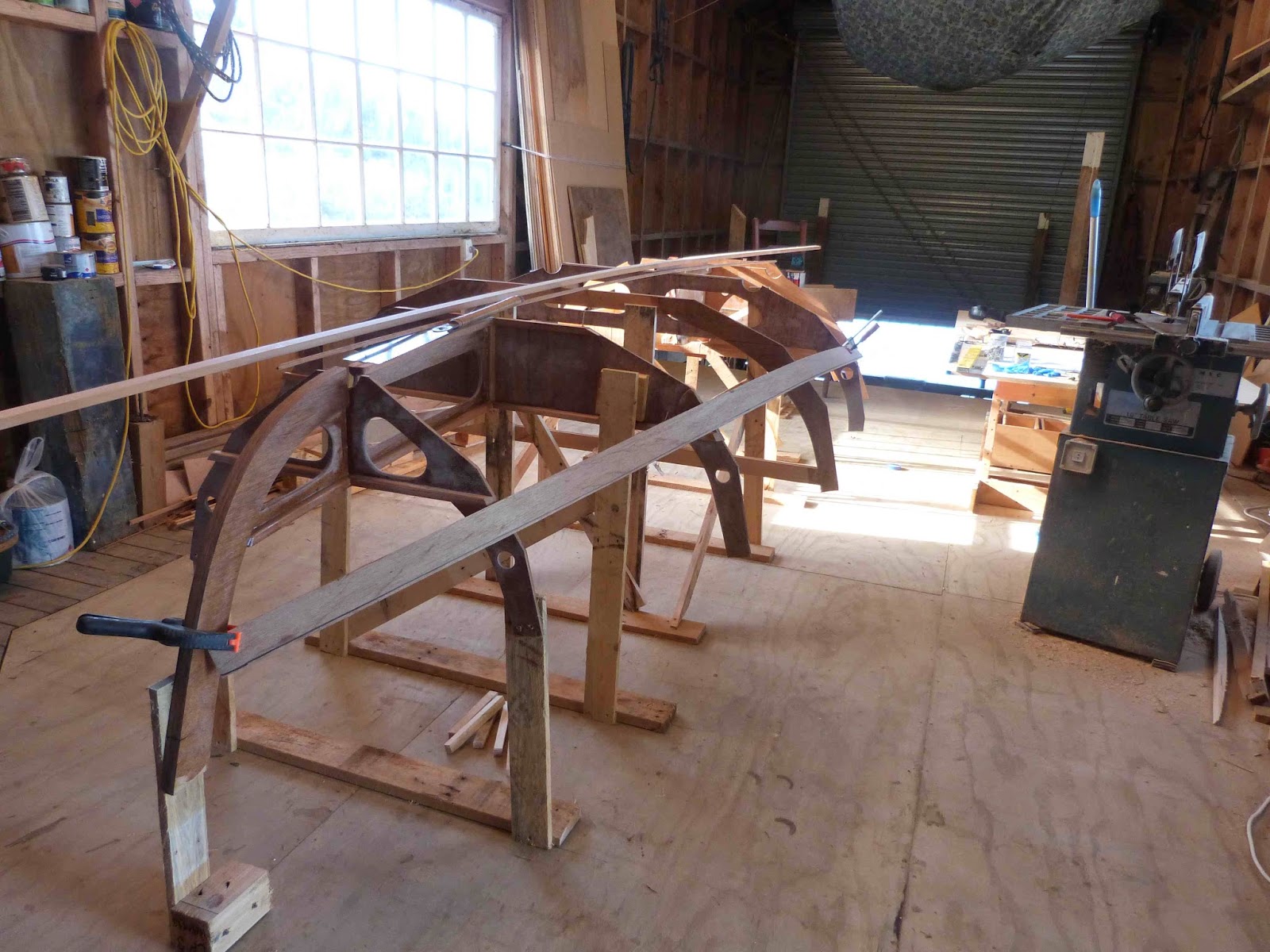 Here I'm checking that the framework is all "fair", that is that the plywood will wrap around with a nice even bend, no kinks or missing the fames.  Thats my straight edge I'm using, but I"ll make a "spiling batten" when its time to work out the plank shapes. The plans will have those shapes already worked out, yes I know I could do it on a computer but I like doing things in "real time".

Today, as soon as I’ve glued up this mornings bits and pieces I’m taking the ship out for a run down to the rivermouth and back, its been three weeks since the engine had a proper run under load and it’s a midday tide and I’ve spent some time out in the kayak at dead low tide to memorise the layout of the channels so I think that it’s a good opportunity to explore some with the bigger vessel and blow some of the cobwebs out.

Posted by John Welsford at 3:41 PM