Not much building, but the subject is still boating.

Its Sunday, what with one thing and another the past week has been a very quiet one on the boatbuilding front, I’ve cut the notches for the seat riser stringers in SEI,  cut the stringers with the bevel on the top and rounded the lower corner and that’s about it.

But there has been quite a bit of correspondence to answer, a couple of articles to write, and work to do on “the book”.  Yes that’s surfaced again and I’m making very slow but steady progress on it. One of the issues that stalled it was the loss of all the pics and drawings when the publisher of the first edition was sold to another publisher, then that group changed as well, much of the material in the original companies editorial warehouse disappeared, much to my annoyance and I’ve not been in good enough shape to put the effort in to redo what had been a pretty big effort in the first place.
But just after  Christmas last a bundle of drawings arrived in the mail with a note from the very nice woman whom I’d been hassling about them, no pics but they are easier to find replacements for, so the project is now possible again.

On the publishing front, I’m busy learning how to use MS Publisher, have not thrown the computer against the wall yet but have been close, yes I know that there are easier and better etc, but that’s the only one I have right now so it must suffice.
I’m putting together a catalogue, seeing as I’m going to be at three events in the USA later this year ( you can bet that those fingers are crossed) and there is the opportunity to sell some printed matter so I’m working on that. Slowly, but it will get there.

In the meantime, among the correspondence was a superb pic of 7 SCAMPs tied up in the Point Hudson Marina at Port Townsend last March, there for a SCAMP Sailing skills course run by the inimitable and peripatetic Howard Rice this was a very special event and the participants went away with some wonderful memories.  I really wish I’d been able to make it.
Ah well, next time. 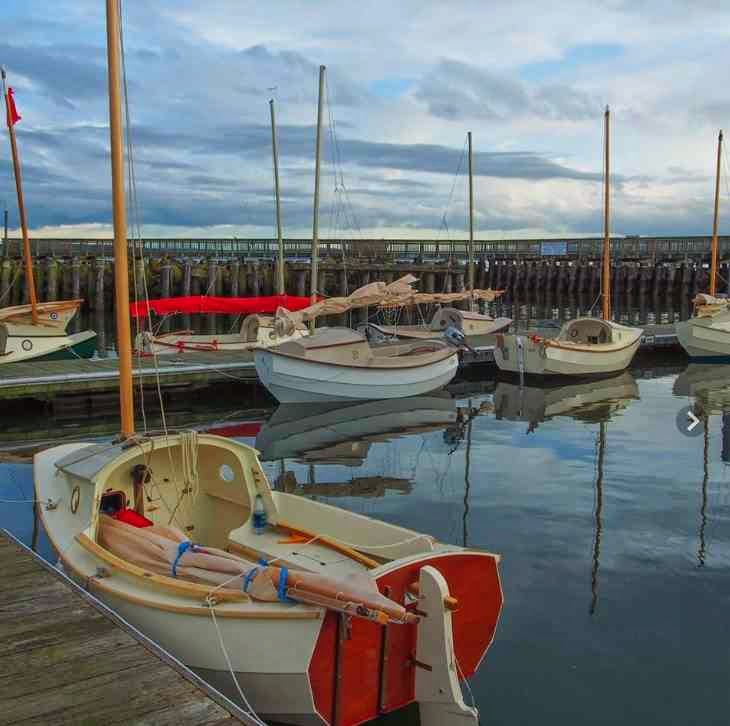 SCAMPs in the morning , a great day coming up.

I have exchanged emails with Simeon, asked who's boats these were.  I recognised some but wanted to get it right, so heres his reply. Thanks Simeon, well done all, what a great little fleet.