Going for a run on a rainy day

Ships, and dogs both need a run every now and again.  Come to think of it so do their owners!
This mornings weather forecast made “lousy” look desirable so our long walk on the beach was out, besides that only works for Dimbleby the dog and I.  The ship still needed a run, Mr Ford down there in the engine room would just corrode away if not run regularly and its not good to just fire a diesel up and let it idle with no load so a short voyage down to the fuel dock an hour away at the marina seemed a good idea.

The tide was to be full about 10.30 am, so at 9 45 it was disconnect the electricity, cast off and head upriver to my usual turnaround spot.  The channel is very narrow where our dock is, the current was running strongly plus it was blowing hard and in those circumstances I like a bit more space to spin her around.

No problem, turning a single screw boat is not hard once the basic idea is understood, this one has a “left hand” prop, rotates anticlockwise when seen from behind so if you back her a little then put her in forward with the engine just above idle and the helm over to starboard the prop will "walk" her stern around about a quarter turn to starboard before gaining way. Stop, back up a little and repeat , its possible to turn her right around in about  a boat length and a half.
We have a 5 knot speed limit in here, I’ve never figured out whether that is 5 knots through the water or over the ground and the harbour board cant tell me either but there would be two knots of tide in this river at mid range so it’s a leisurely trip against the current out to the entrance and past the bar (three actually! One kind is the alcoholic kind at each of the two yacht clubs, and one is of the marine kind which is just as dangerous, across the mouth of the river) and out into the open.

Out through the river mouth and I pushed the throttle forward to 1750 rpm which from Mr Ford gives us just about right on 8 knots.  While not fast for a motor boat, for someone more used to small sail and rowing craft that makes the scenery go past at a satisfyingly fast rate.

As we came past the fairway markers there was an interesting sight up ahead,  four yards across a good sized foremast, a black hull with the silver fern on the bow and a group of people bustling around on deck.  That’s the Training ship “Spirit of New Zealand”.  Three masted, square rigged on her foremast, Steel hull,  rather pretty. 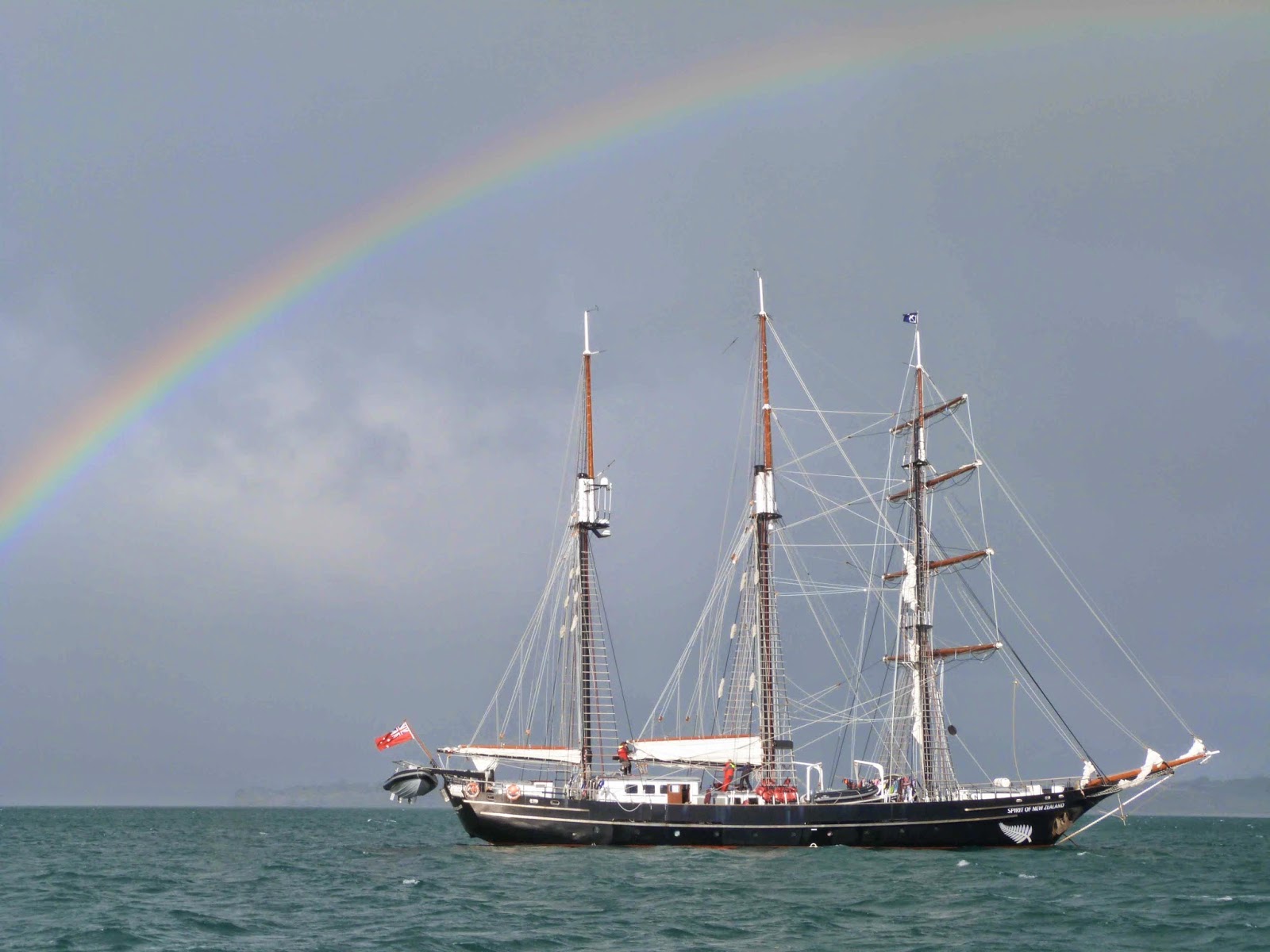 The rainbow was a really pretty one but it was the herald of a seriously nasty squall, I beat it into the marina by a few minutes, not that it was a worry to the ship, I just did not want to have to get out in the rain to tie the ship up to the dock. Wus, thats me!

From the photoshoot location I motored across to the marina and took on fuel, Dog and I went ashore for a walk, he seemed eager but was really just needing to lose some fluids. I’ve tried to teach him to use the boarding platform aft but that might take a while for a “housetrained” animal to learn. 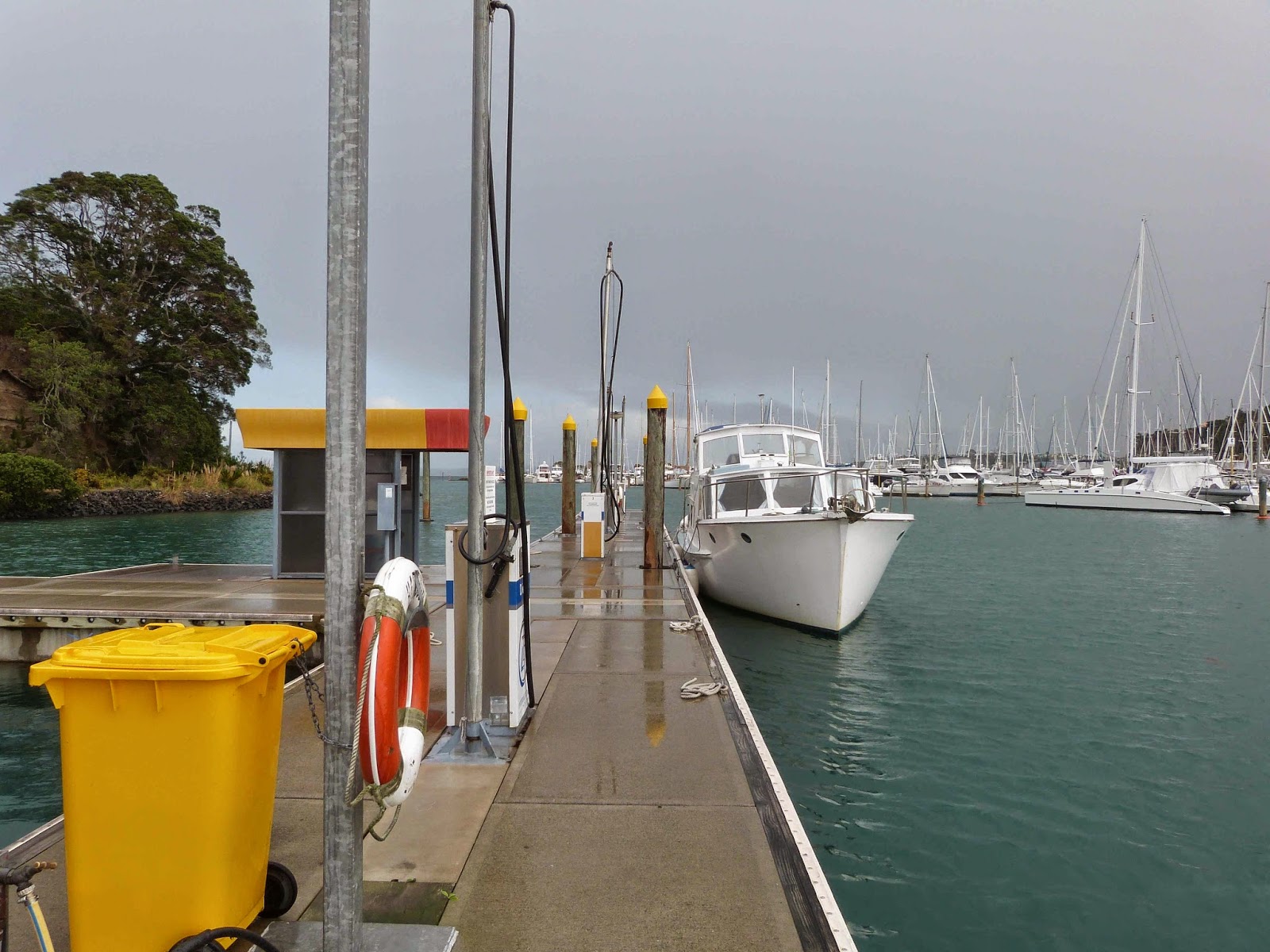 Yes thats my "Ship.  As I get used to her she's easier and easier to handle, even singlehanded but a dock like this one with a decent fender on it and lots of space makes it easy.
I put 100 litres of diesel  in the forward tank. All done, the line squall gone through and I'm ready to go. More of that weather coming so I think its a "drawing board" afternoon rather than an outside occupation one.

Tanked up, enough to keep the tanks fresh and to do the trip across to Waiheke next week I’m now tied up at the dock here at Gulf Harbour Marina while a big squall goes through, I’ve two hours in which to get back to my own dock before the tide drops too much so I’ve time to relax. Mendelsson on the radio, cuppatea and a biscuit (a cookie to you USA people)  and the dog curled up on the rug while I write this.  Life could be worse.

Update.  2 hours after the above.

There are times in life when there is no going back, for example like about halfway through proposing to your spouse to be .
This one was not quite on that scale, but approaching the dock back at the boatshed in 15 tons of boat that does not steer that well at very low speeds, singlehanded with a screamer of a wind blowing and the tide running hard, is one of those.
Bringing a lump like this to her berth is always a heart in mouth moment, but I’ve practiced, know where the narrow channel is and had both fenders and dock lines at the ready. The standard approach and docking drill worked.
No dents or scrapes. Whew!
So we’re home. Electricity connected, kettle heating for a cup of tea, lunch on the table and ---- well, its been a good morning on the water.

Posted by John Welsford at 4:02 PM