SCAMP Camp is over for this year

SCAMP Camp is over for this year. The plywood kitsets and all of the consumables were delivered two weeks ago , the benches and all the consumables set up, one of each of the building jigs and shop manager Scott had everything  ready to roll. Two weeks later 6 boats were wheeled out by their excited owners.
Its like watching your children leave home when the trailers are all loaded and the cars head off out of  the North West Maritime center with the fat little boats following along behind.  New friends head away to finish their  boats, hopefully to be back next year to participate in the next “Red Lantern Rally”.

This course went really well, we as instructors have learned from previous courses, we’ve developed the sequence and the methodology for assembling the kits, have bought tools that speed things up, Scott Jones of the Maritime Center brought his organisational skills to the class and it went so well that we could afford the time to take the middle weekend off to attend the inaugural Red Lantern Rally.

To explain, the SCAMP, being designed and promoted as a small boat with camping capability has a red hurricane lamp as a sail emblem,  hence the “Red Lantern Rally” which is an annual event for SCAMPers .
Held in Mystery Bay off Kilicit Harbour on Marrowstone Island in Puget Sound this attracted 11 SCAMPs and about 50 people including the crew from the SCAMP Camp build class and some from the SCAMP Skills class run by Howard Rice and I in our other roles as sailing skills tutors       http://smallcraftacademy.com/

Its been an intense 3 weeks,  I’m very glad of a quiet few days helping my host Pete Leenhouts with his project,  he is keen to get the Bolger Clam Skiff he’s building for his brother out the door so he can move the part built SCAMP he’s bought into the workshop in order to complete it, learn to sail it, and then head for Texas for the 2016 Texas 200 ( oops, was I meant to let that cat out of the bag?  Too late now Pete, you’ll be expected on the start line!)
I expect to be there to chase him down the course, I’ve had an offer of a boat to be built to my experimental “Saturday Night Special” design  (I do hope it works), and hope too that the fates conspire to enable it to happen. 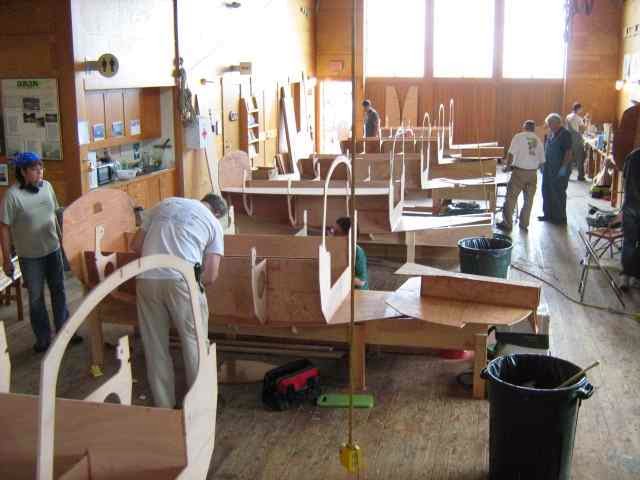 The classroom at the North West Maritime Center is a really nice place to work, well lit with natural lighting, wooden floor to ease the aching feet, plenty of space and a wonderful view out over the water to remind us why we're building boats.  A geat place, 10/10! 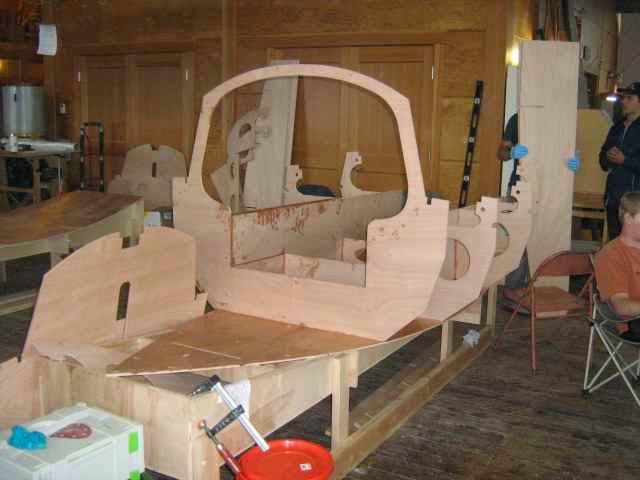 This shot was taken first thing on Wednesday morning, a lot of progress to show  for only two days of work.  Here we see the centercase, fiberglassed inside, with frames 4, 5, 6 & 7 set up on the bottom panel, the water ballast tank being that space behind the first frame in this pic, and the panel being held up behind is the port side mate to the starboard side seat front that forms one side of the offset centercase . By that evening the transom was on, everything glued in and the forward frames and bow ready to set up.

Back to Port Townsend, I have to say thanks to the North West School of Wooden Boatbuilding who have run the SCAMP Camps here in Port Townsend.  They have contributed a great deal to the development of the SCAMP class, to the SCAMP kit development and to the way that the build classes happen.
This years course was the last one that they will be involved in, and the ball will in future be carried by Small Craft Advisor Magazine, Howard Rice and myself through the “Small Craft Skills Academy” (link above) and will be run at several different venues  around the USA and possibly other countries as well.
Thank you NW School, thank you interim Director David Blessing, thanks to the school board and staff, and thanks to then Director Pete Leenhouts for supporting the class and the SCAMP. 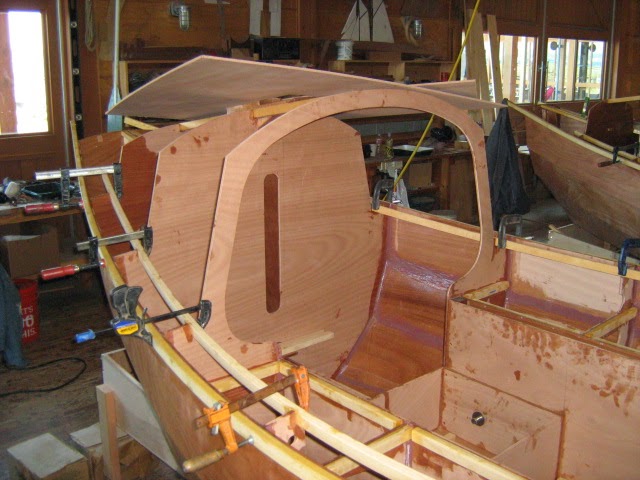 A few days later the boats have been planked up, the outer rubbing strakes are on and here we are putting the inwales on. They support the side decks and the coamings ( seat backrests) and add considerable strength to the boat.
Most of the places inside the boat that will be difficult to access later have been sealed with epoxy resin, the glue joints reinforced with epoxy fillets and items such as the centerboard pin are in place. 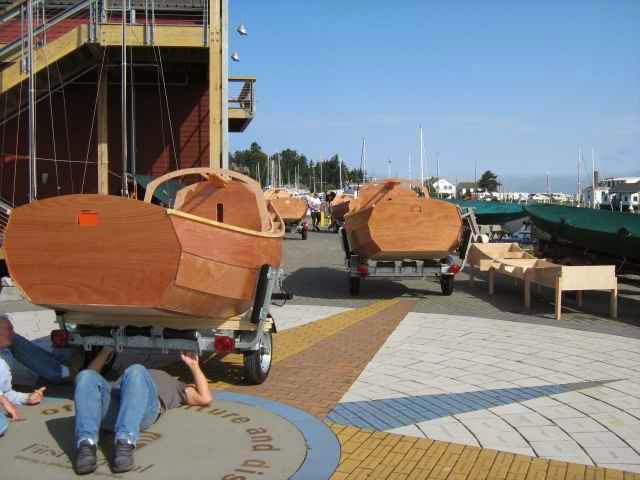 10 working days after we all trooped upstairs to brief the class we're loading the trailers and watching the guys prepare to tow home, some travelling thousands of miles to get back to the the temporary shipyards, otherwise known as Garages, where the boats will be completed. 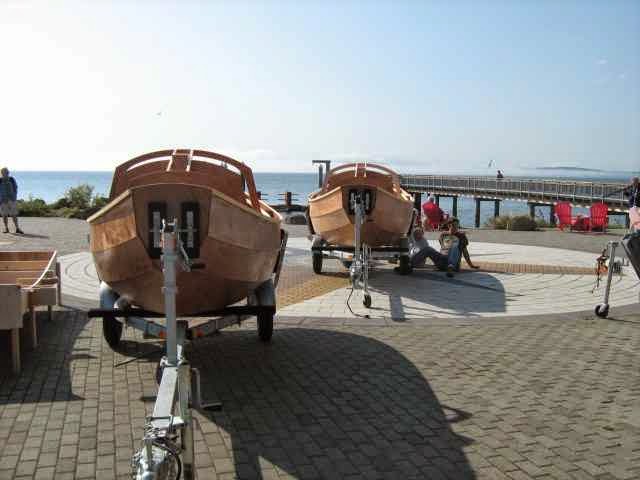 Ready to hook up and head out.  Both rewarding and sad, new friends left behind,  but all of us hoping to see each other next year at SCAMP Skills, or the Red Lantern Rally.

See you later guys!
Posted by John Welsford at 1:43 PM