Stuart Reid and one of his designs, plus news on sails

I’ve known Stuart Reid for over 30 years, watched his gradual progression from an architectural draftsman through retirement  and time to pursue a passion for  boat design and some stunning artwork. We don’t see each other often, but the friendship has been there for a very long time so we’re supportive of each other and do what we can to help.
Stuart designs some very good small boats, and would be the first to admit that he’s a better designer than a marketer or salesman, so I’ve included several of his boats in my on line catalogue and sell enough to provide Stuart with his “beer money. I suspect that there has been very little beer and quite a lot of high grade art paper and such, all good by me.

Sadly, Stuart lost his wife Rose last year, his brother tells me he was managing ok until recently when he was seriously injured in a fall which has left him with spinal damage and paralysed with an unknown long term prognosis.
I hope to visit him in hospital this week, and yesterday went over to a customers place to take some pics of a build to his “Optimus Maximus” plan so I could show him one of his “babies” . 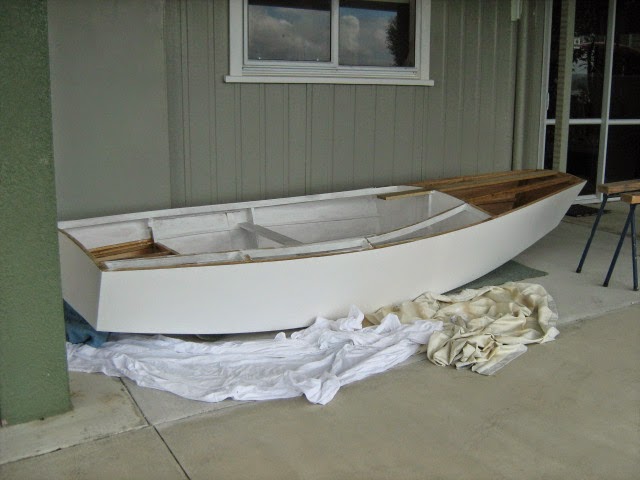 Optimus Maximus, she's a little flat bottomed pram, about as simple a build as you can imagine.
This is about 3 weeks work, there is not a lot left to do and the young man will have a boat to be proud of. 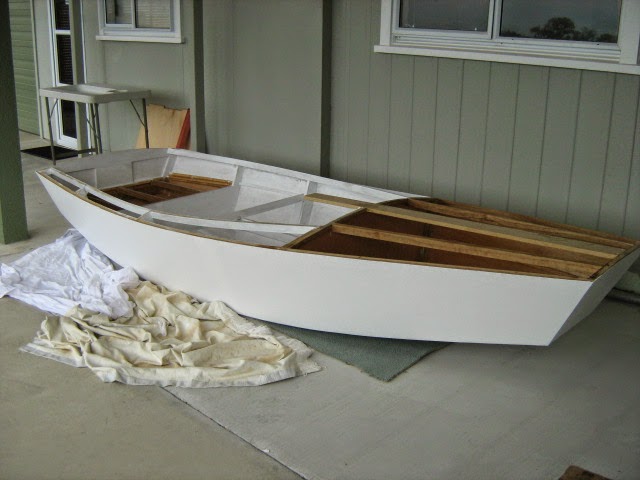 She's got a lot of room in there, a couple of good sized plastic hatches would give access to the huge bouyancy tanks for storage, I've been camp cruising in boats much less suited than this one. 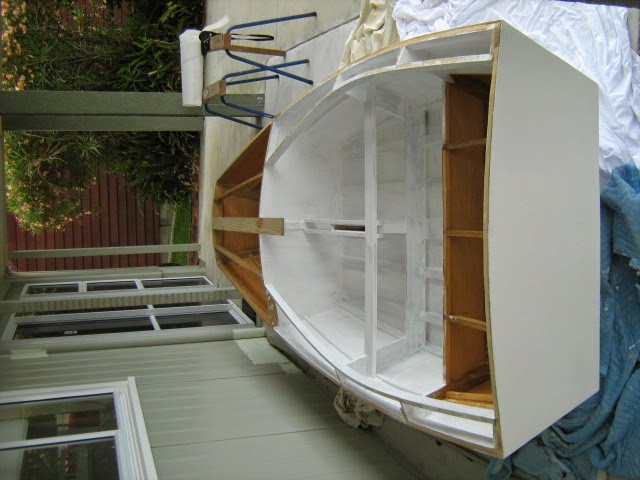 Way back when,  courting my now wife, I introduced her to sailing in the original Optimus Maximus.  She sat on the starboard side facing aft, back against the forward bulkhead and legs out alongside the centercase. There is plenty of room there to be comfortable and sheltered, and the boat is so stable that she did not need to change sides each tack.
An adult and two kids would be a good load, this is a much bigger boat than you'd expect.

Built over the holidays by a family which includes a very keen11 year old and a yachting helper, this boat is a very simple, but very capable adventure boat that will suit Kawau Bay where they live. I’ve sailed the original years back, and its big enough for two adults in some comfort, faster than you’d think and  both stable and easily recovered if some enthusiastic type manages to tip it out.
This is one of my favourites among Stuarts designs, and we’ll have more photos as the family gets it rigged and in sailing.

On the rigging, I’ve supplied the family with a sail that I’d obtained as a sample, one which I intended to go on SEI.  I am offering a small range of very economical sails,  RSS ( Really Simple Sails) are made in the Philippines by  the family and friends of  Mik Storer, While they are made to suit some of his designs I have found that they will fit a lot of small boats and am now redesigning some of the rigs on my boats to suit them.
They are cheap, very nicely made, and will be available off the shelf,  they’re a good deal, made by people who understand traditional sails,  and almost half the price of a custom sail from a sail loft.

For those of you outside NZ, you can get them “here”
http://www.duckworksbbs.com/sails/rss/index.htm

Or within Australia, “Here”.
http://reallysimplesails.com/

Posted by John Welsford at 6:36 PM