I found some short pieces of mahogany 2x4 in my collection, many years ago it had come out of a bank that was being refurbished. I’d spotted it in a dumpster on the footpath, managed to get some of the shorter pieces into my car and put it in my pile of “resources to be used for building boats”.
That was probably 30 years ago, and I’m down to the last few bits,  two of which are now the gunwale blocking for SEI.

The task at hand is to build the gunwale structure, that’s the blocking and inwale.
To go back a little, when I drew SEI I’d pinched her top plank a little midships to get her narrower there to make it easier to get oars the right length without being ridiculously long, but when I put the boat together I could not get them to lie fair, so I’ve let the top edge spring out and pulled them fair by wrapping the gunwale strip around and glueing it in place.
I’ve put fillers in between the frames and the inside surface of the planks where its sprung out and changed the dimensions on the plans to correspond.

All that means that I cant screw the blocking in through the planks then cover the screws with the gunwale strip, until the inwale is in place its that outer that’s holding it all fair.
I’ll put those screws in later and cover the heads with bungs, but in the meantime I’m cutting the blocking to fit the inside curve and angle required, glueing the blocks in place and rounding all the square edges.
Each block has to fit the curve of the side, be shaved on the inside to match that curve, angled on the outside to fit the varying angle of the plank which means a twist in the bevel, and it has to be the same angle from horizontal as all the others.  It sounds fussy work, but in reality its not difficult,  just a bit slow. 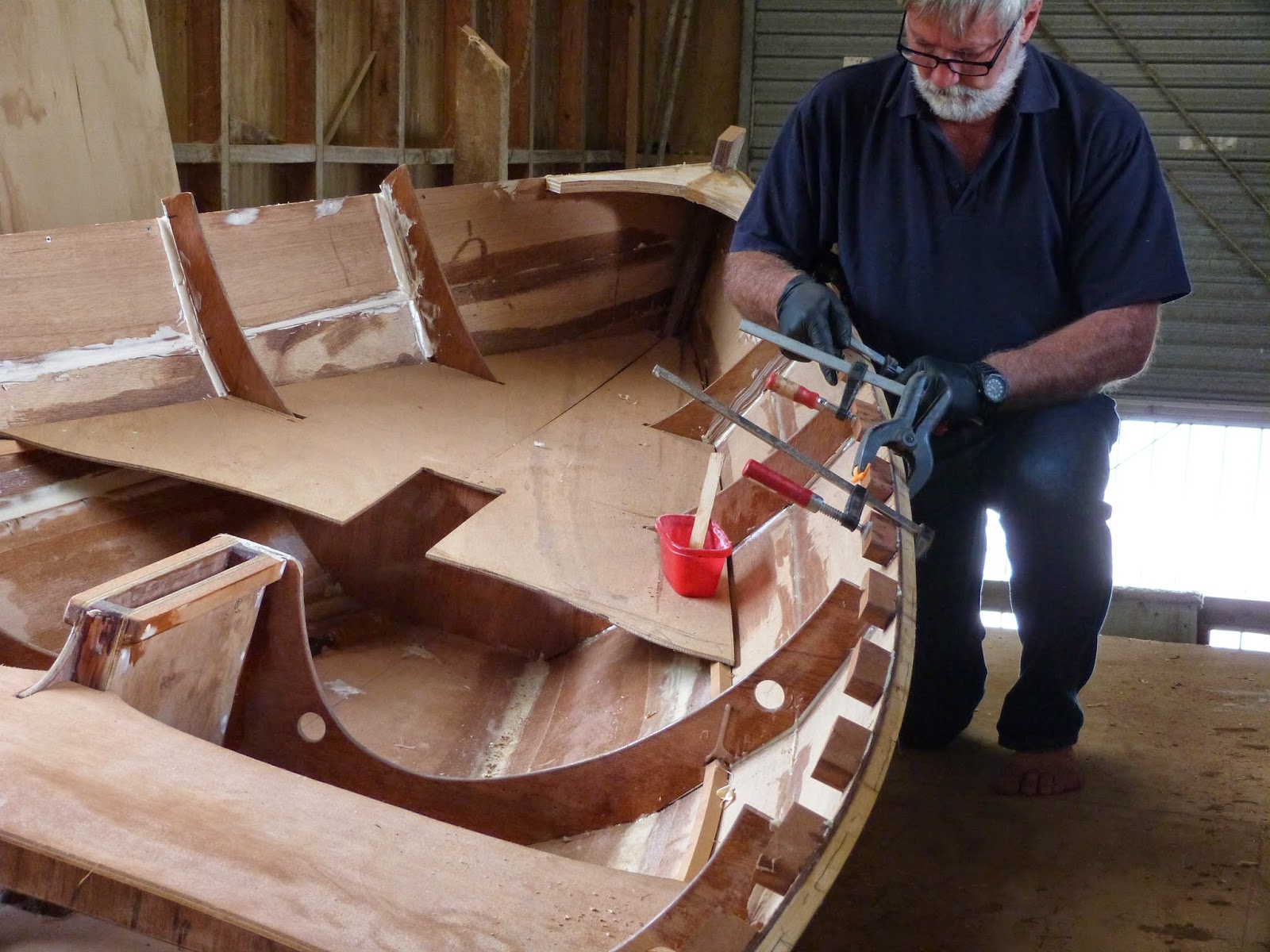 All greasy with glue, it takes some fiddling to get the blocks perfectly positioned with the clamps on.

The long pieces at the bow and stern are to take chocks ( fairleads in “English” ) for anchor or mooring lines, and the spacing of the blocking is such that all the frame heads are covered with a block slotted over each. 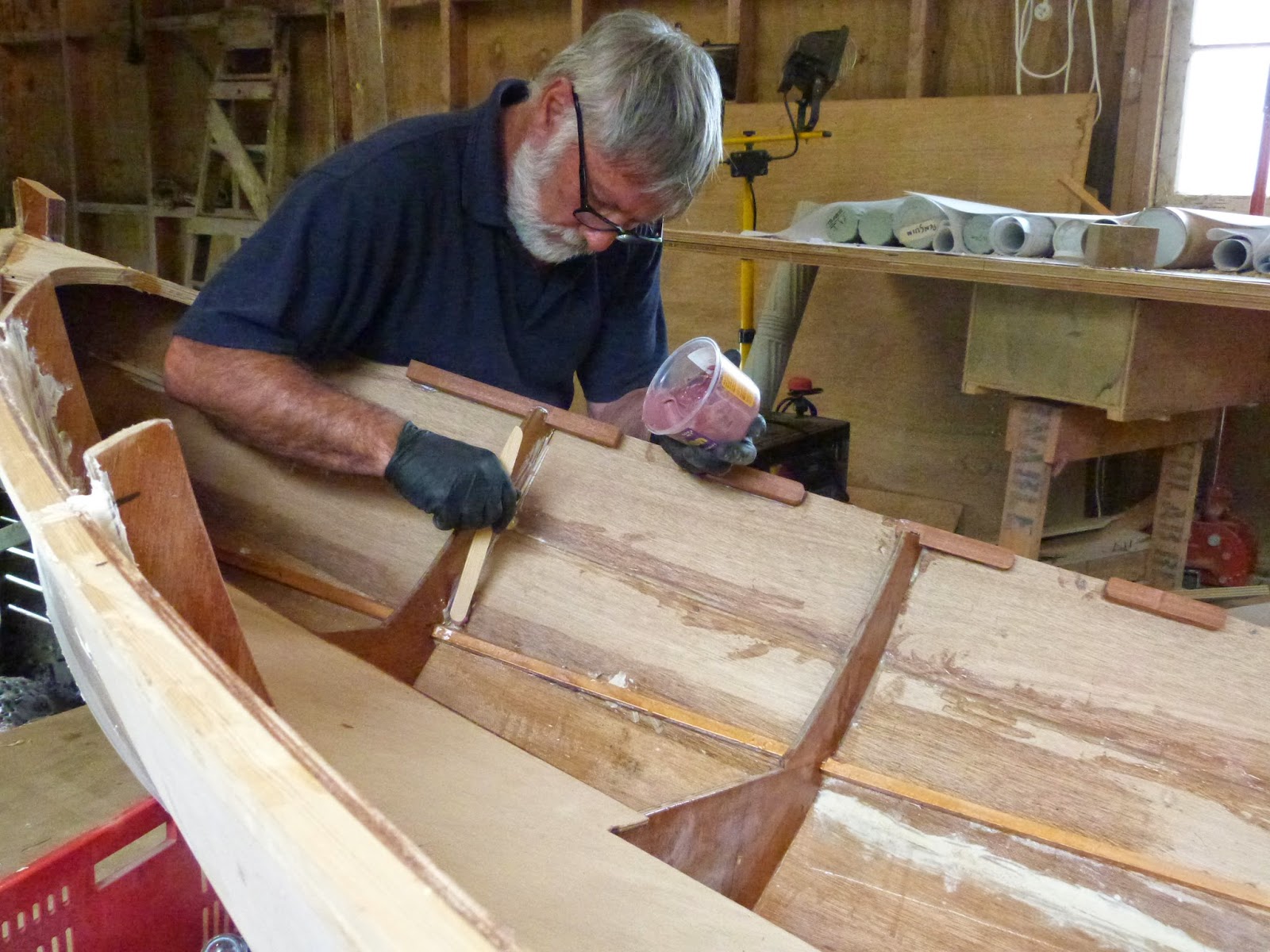 I filleted the frames to the planking before I fitted the inwale, its much easier to access without that in the way.
The nitrile gloves by the way are "Black Dragon" brand, from Autolink Distributors.  They are the best I've found to date, way better than the Ansell ones, but do get them a size up on a perfect fit. Like any of these gloves if they are stretched tight it takes very little to tear them.

The blocking on one side is done, the other side will be fitted in the next day or so.

For the inwale I’m using the leftover strips from the mast material, they are about 25 x 10mm, and I’ll laminate two in on each side. 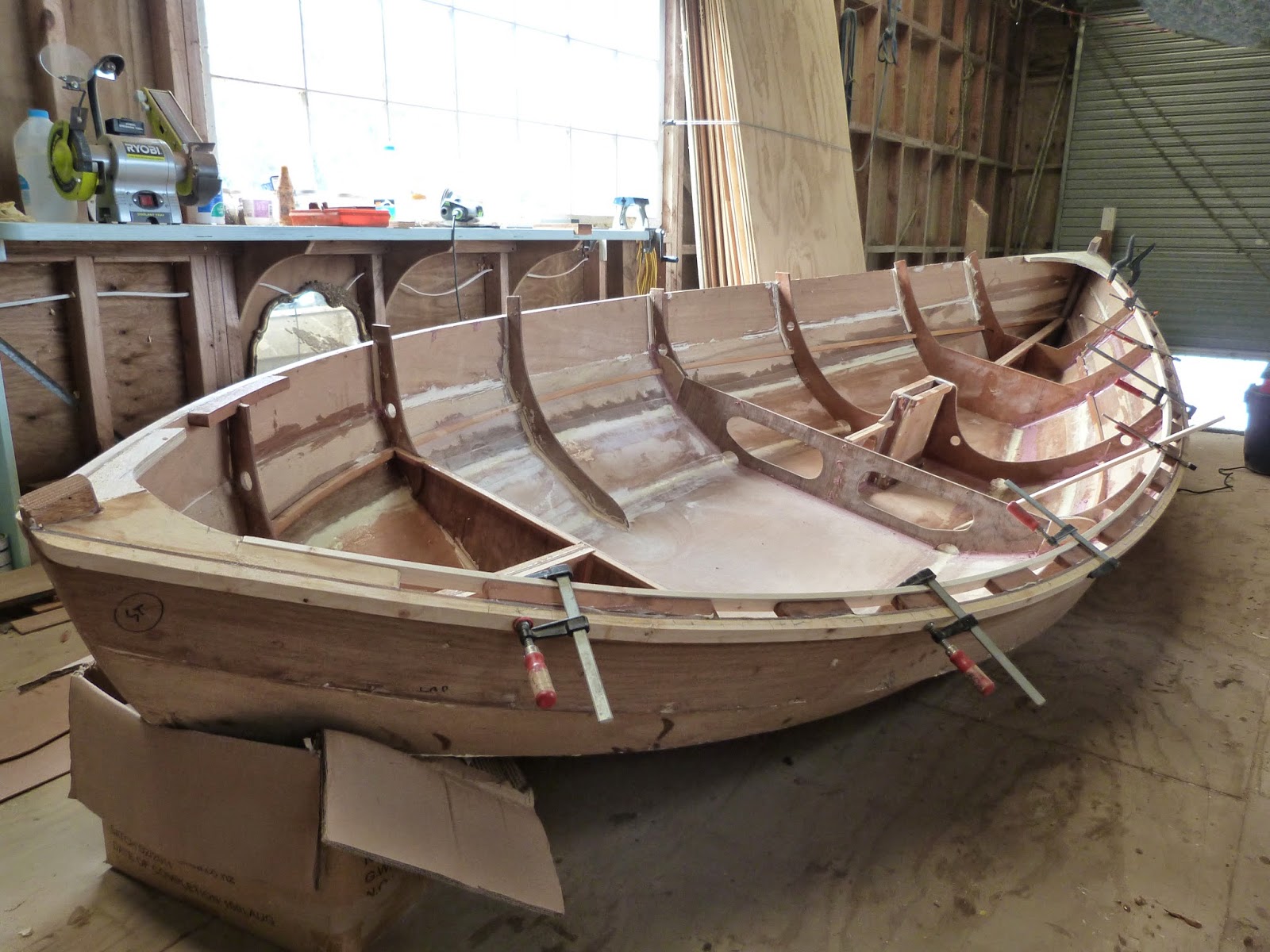 Dry fitted, just sprung into place to test the fit,  from here it came out, had the lower inner corner rounded and sanded, then the glue was mixed up.

Just fitted one, rounded the inside lower edge first, sanded the saw marks off, then cut it to length.  Glued one end in, clamped it into position, applied the glue to the rest and then sprung it into place. 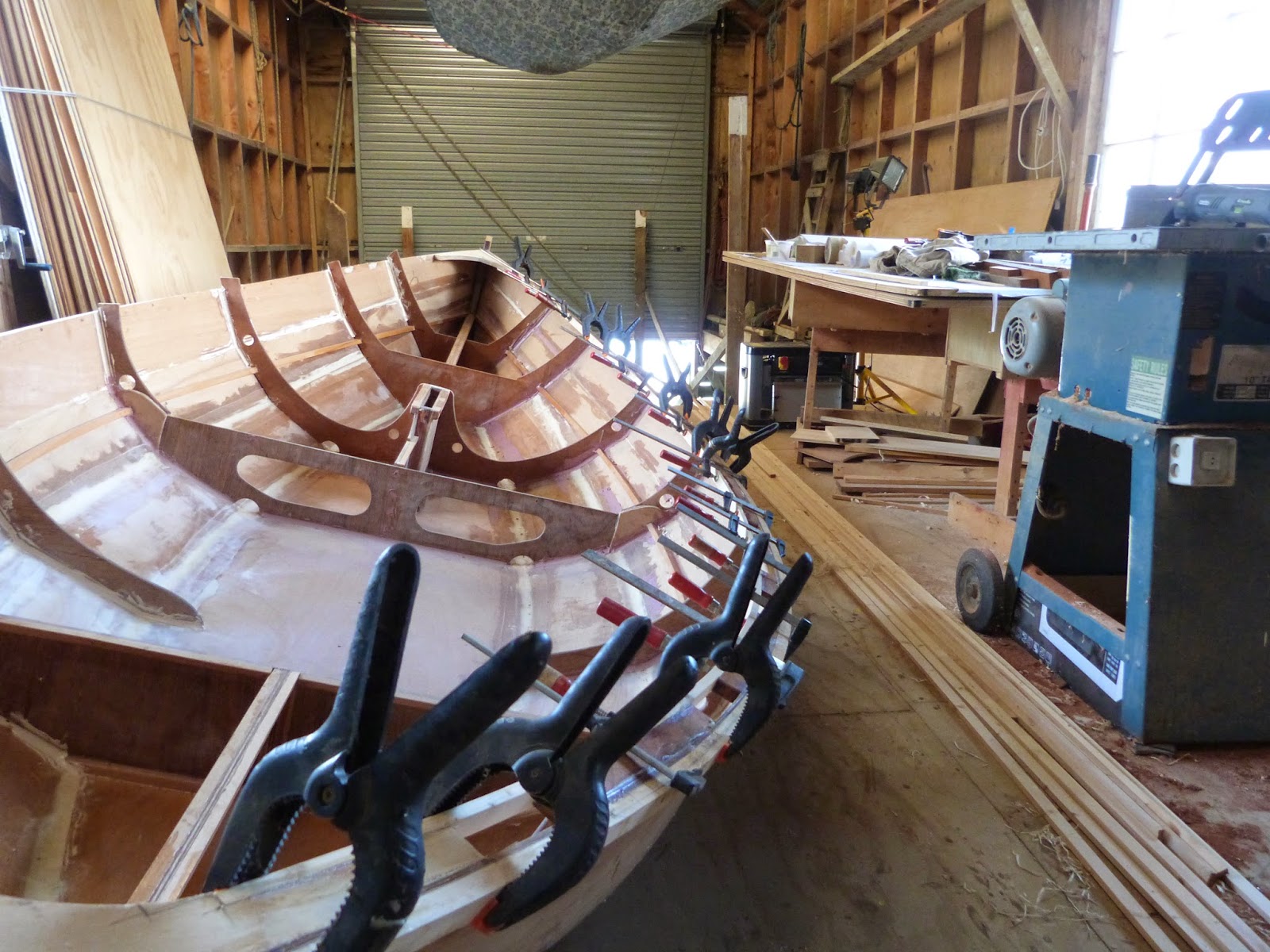 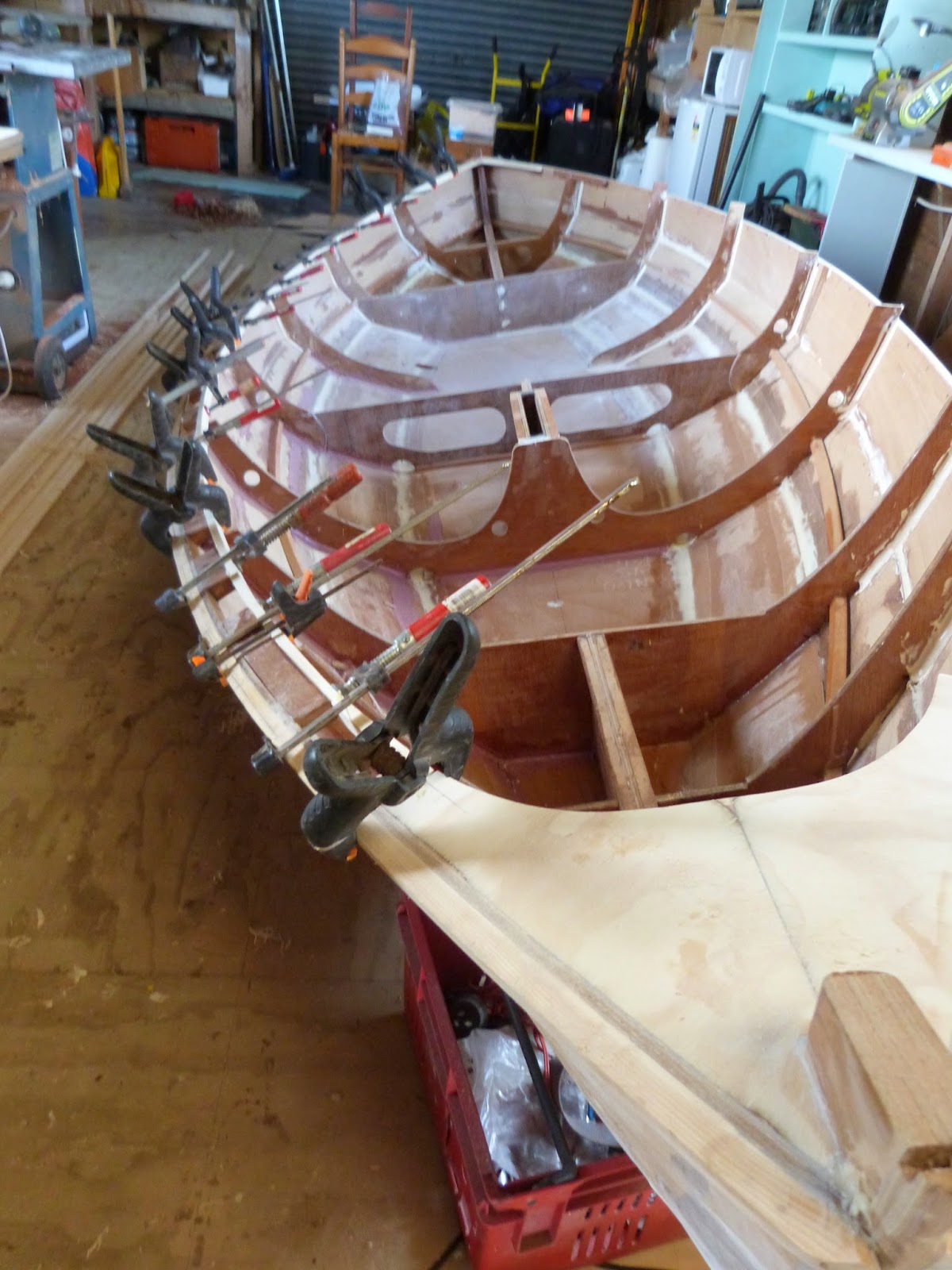 I'm told that its possible to have too many clamps, I can understand the theory but have yet to meet a boatbuilder who has hit that limit.

Looks good, I’ll see how it feels before making the decision as to whether or not to fit a second lamination to the inwale.

Its my mums 90th birthday tomorrow, and we’re taking her out to a nice restaurant for lunch, so what I do today will have a couple of days for the glue to set up hard.

When gunwale on the other side is done the mast box and seat tops can be fitted,  not so far to go now.

Mind you, its about this stage of the project when the builder starts to see the finish line but forgets that all the really slow, time consuming finishing details are still to be done.

Posted by John Welsford at 1:23 AM