Today I had a small job to do in Whangarei,  I knew it was only about a 10 minute job, had tried to talk the owner through the procedure but he just could not get it right.  He was frustrated enough to be happy to pay me to drive for two hours each way to do the job and get his machine back into service, so off I went.
Whats special about Whangarei?  Cruising yachts, hundreds of them, up in boatyards being worked on,  lived on, modified and repaired.  Same with the moorings, lots of boats with character, flags from all over the world and I kid you not, I saw flags from England, France, Netherlands and Germany,  South Africa, Uruguay, USA and Canada, plus a few I did not recognise.
But the really interesting thing about Whangarei is that my friends Annie Hill and Marcus Raimon live there.
Marcus has just bought a Flicka 20 and makes his home thereon,  Annie has taken over Marcus’s shed in Norsrands boatyard and has started building a replacement for Fantail, her 26 ft liveaboard.
I’ll get back to you on that. Next post, its interesting stuff.

But home as must, and I was sitting in my bunk at about 8 this evening, there was still a little light left from a spectacular sunset, it was slack water low tide and the wind that had been a pest all day had run out of puff, and---- well, it only took about two minutes to slide SEI off the  dock and into the water, and I was on my way.

She left a glossy flat wake with twin whorls each side from the oars as I stroked along, she moves very sweetly and leave hardly any waves at cruising speed, and the work is just enough to bring on  the “runners high” the gentle endorphin rush that moderate exercise can engender after 15 minutes or so.
That makes an hour go past very quickly, the mind aware and functioning but in a state of mild bliss.

While in Whangarei I’d had an hour or so before Marcus would be home from work on lunch break,  so I’d driven around the waterfront suburbs with an eye out playing a favourite game. It goes so, “If I could afford to buy it, would I live in it?”    There were very few that ticked the boxes,  and it was as I hauled SEI out of the water with my little dog sitting there telling me that he’d been a good  guy and waited patiently for me to come back, that I realised just how lucky I am to live here on the water.

It was a good day. Hope yours was too. 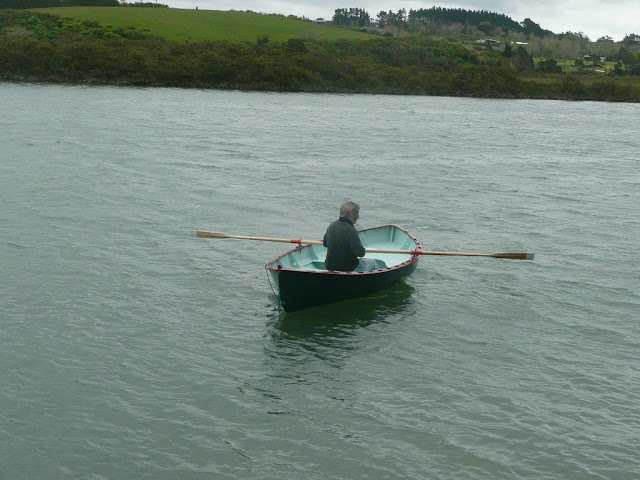 Posted by John Welsford at 1:49 AM