Below 40 South, an adventure to be shared

Life is full of adventures,  you can share this one.

For as long as I’ve known him, and that’s a good 25 years or so, Howard Rice has been working on setting out on an adventure that would define his life.
He’s had adventures that top anything that most people have ever had but his sights are high and his ambitions large.
Read on, and follow the team as we help Howard.  While not everyone can sit alongside him in the boat, we can all of us experience the highs and lows of this voyage of exploration through the video that will be made from his cameras.  Support is needed, please help us get what will be an amazing story out there for all to share.
Check out the link below for details on that. 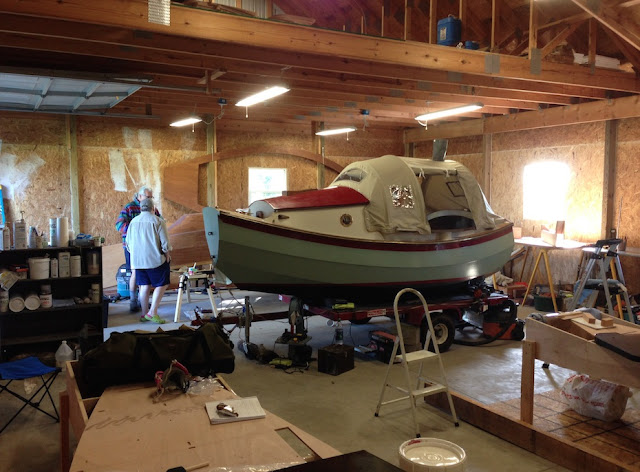 Here's "Southern Cross"  near complete,  being fitted out at SCAMP Camp Michigan this last summer.
As I write she's about to be launched for test sailing her gaff ketch rig tried for balance and her many systems tested.

Me? I designed the boat, it’s a SCAMP, with changes to suit the environment into which it will be venturing, I’ve a Kiwi sponsor who prefers to be anonymous, who’s covered my airfare to Chile from here. This means I can support Howard and help prepare the boat (thanks so much, I could not have even considered it without that help).
Sailing a boat of my own design in the Straights of Magellan was not on my list of possible adventures, but its going to happen.  Life is full of suprises!

Here is the press release from Lutra Productions who will be making the “movie”.

Press Release
Announcing “Below 40 South” a documentary being filmed about a solo voyage of exploration in a 12 foot sailboat through Tierra del Fuego and into the Southern Ocean.
Lutra Productions is pleased to announce we will be producing a documentary film of footage shot by solo sailor Howard Rice as he explores the remote, dangerous and staggeringly beautiful Tierra del Fuego in southern Chile. Howard has built the wooden sailboat he will explore in (A highly modified Small Craft Advisor magazine SCAMP design) and aboard this boat cameras will be mounted to record a daily video diary of his adventures below 40 degrees south.
Dateline: Austin Texas, Port Townsend, Washington- December 7th, 2015
In February 2016 sailor and explorer Howard Rice will attempt to voyage south on the Straits of Magellan and out into the Southern Ocean to explore the remote southwest islands of Tierra del Fuego. Howard Rice sailed the eastern part of the Beagle Channel and south rounding Cape Horn in a fifteen foot wood canvas sailing canoe in 1990. He returns to explore further. His voyage began with the construction of the boat he will sail and Lutra Productions has documented portions of the build to incorporate into the planned film “Below 40 South, A Voyage To The Dark Side Of The Moon.” Rice’s actual voyage begins in January 2016 on arrival of the crated boat in Punta Arenas, Chile.
Rice and the boats designer New Zealander John Welsford will test sail the boat on the wind swept waters of the Straits of Magellan. Lutra Productions will be there to film the launch and test sailing before Rice sets off alone south into the wilderness of Tierra del Fuego and the storm wracked Southern Ocean. There will be no support boat and no film crew following him. He is sailing solo, unsponsored and will be operating a range of small GoPro cameras to record this amazing and historic small boat voyage. Some men and women may choose to cross oceans in small boats but all sailors know near shore navigating is by far the most hazardous, Tierra del Fuego below 40 south is considered the most dangerous ocean environment in the world and is home of the infamous Cape Horn.
Rice will have one year of opportunity to explore the region but hopes to conclude his voyage within six months of his departure unless more time is needed. The southern winter begins in May and Rice has equipped his 12 foot boat with a wood stove should he need it for warmth and is prepared to sail in winter if needed.
We invite you to contact us to learn more about the plans for the production of the documentary and how supporters can become part of the film production effort. To learn more about Howard Rice’s amazing small boat adventure you can contact either Small Craft Advisor Magazine or Lutra Productions or go to www.below40south.com the official website of the film.

www.below40south.com is the official website for the film
Posted by John Welsford at 10:53 AM