On Sunday I got started on the build of my very own adventure boat.  I get lots of emails from people who are out there having way too much fun, and its time I was out there with them.  Now, I’ve currently got six boats .  Six is not enough do I hear?
Well, lets see,  here's my collection.

Kairos, 43 ft, abut 15 tons, motor cruiser, draws nearly 5 ft of water.  She’s my home, has all the mod cons including hot shower, freezer and fridge, a recliner armchair, a monster big diesel under the main cabin,  and and and.  (And a lot of maintenance)

RIB,  a rigid bottomed inflatable. Not even dignified by having its own name, its about 9 ft long, is the tender for Kairos, stable, hard to row, but stable. It fits the davits on Kairos, is stable, carries a big load, has wheels to assist me in dragging her up the beach and is stable.  There has to be something good about something so ugly. Stability is good when taking friends and family ashore.

May, soon, when I get around to it, to be renamed “Spook”. She’s an 18 ft on deck, long keeled one and a quarter ton gaff sloop with a cabin that will just sleep two.  She’s pretty, sails really well, and takes over an hour to launch and rig, and an hour the other way when pulling out. I love her dearly but she’s best when I can use her for a several day long cruise.

SEI.  My most recent design and build, she’s 15 ft, double ended, lightweight, rows well enough for me to enjoy an hour at the oars, she’ll be rigged for sail in the next little while, this boats a whole lot of experiments put together. So far its evident that the shape and structure are as I wished, but the experiment with some of the paint primer is not. I wont denigrate the manufacturer as they don’t claim that its good for this use, but I wont list it among my favourite paints.
I use SEI most days, row when the tide suits and among other things pick up as much of the rubbish  that floats down the river from the town upstream as I can.  Plastic is choking our oceans, this is my tiny bit to help reduce that.

PiWi.  Dennys old plywood kayak, this boat is a testament to how well a plywood boat can survive in spite of some less than optimum storage.  Its been repainted twice in 25 years, but the inside had three coats of marine varnish and that’s about it.  She’s getting  tired now, a bit soft in a few spots, but for use on the river where if she were to spring a minor leak I can get into shallow water she’s fine.
I’m doing a little work on her, hope to keep her in service for a while yet.

But I want an “Adventure boat”.  My real love is Sail and Oar,  a genre that’s become very popular in France and England, and is growing in popularity in Canada and the USA.  Long slim boats that row well enough, sail better, and have room on board to camp in some small degree of comfort.

That plus boatbuilding, and using boats are different hobbies.  Related but different, and if my shop is empty I’m lost. So Long Steps is under way, the build at least. 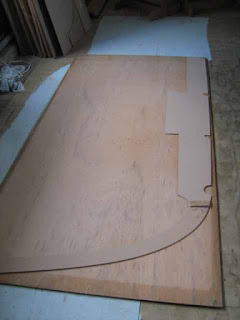 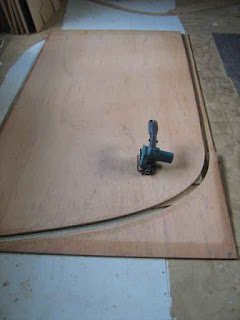 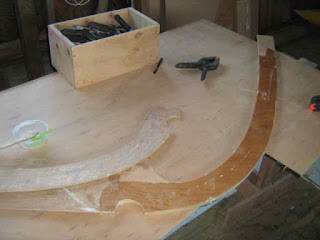 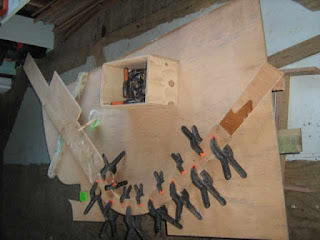 I built the stem on my day off last week, by the time I post this I hope to have a little more done, and am very much looking forward to my  next “Day off”.

Here are some pics, that assembly just fits on a sheet of plywood, its 2.40m long (just under 8 ft) by a metre high ( 3ft 3in, about).  The bulkheads mount at the steps in the top edge of the spine, that’s B#1,  B#2, B#3 and B#4, which takes the spine back to the after end of the cuddy, the high part being the support for the mast step and the low place aft supporting the cockpit floor in the cuddy area.
Building like this means that in conjunction with all the other bits the boats skeleton clicks together “egg crate” style.  She will build upright using her bottom panel as a base, all the bulkheads/frames erected on that, stringers wrapped around and the planks around that.
The bulkheads have much of the interior framing already on them when they go into the boat, so the inside doesn’t take long to build.

I’ve only just begun, from small beginnings and all that.

Posted by John Welsford at 1:08 AM