A piece at a time.

Building yourself a boat is not so much a huge job, as a whole lot of small jobs.  So I've done a few of those over the past week and the project is looking better all the time.


Started the epoxy coating this week,  I’d coated the inside of all the parts of the main mast step box, had some epoxy left over so pumped another two pumps of epoxy into the container, mixed it up and used that to put a coat on most of the area around the stem and frame one. I’d prefer to use paint but that would mean I couldn’t glue to it, so for that area its easier to epoxy it with a section of paint roller on a stick. 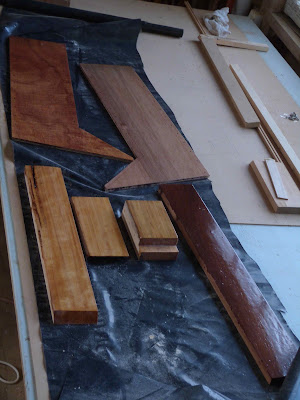 Made up the components for the mast boxes for both the main and the mizzen this week. As I’m planning to have some carbon fibre tubes made up for mast and spars, rather than the full depth ramp for the heavier wooden mast the one for the main has the “SCAMP” type ramp to help me get it in there and up, and its that step and box that needs to be set in place first.  The stringers that run alongside it at deck/cabin top level also brace B#3 and B#4 , and they cant be put in until the mast box is in place.  A good fit is needed here plus they’re screwed from inside the mast box.

I had a visit from Callum, one of the students from my last boatbuilding skills course, I’d offered to run some wood into stringers and such on my sawbench, the Pelegrin that he’s building takes around 120 metres of 20 x 25 for its stringers, a bit more here and there for other parts, and ripping all that with a skilsaw would be labourious in the extreme.
He’s good company and we had a pleasant chat after the job was done, and I was hugely pleased to find out that a neighbour of his had a heap of Kauri for sale.  Her late husband had collected it, and she was looking to sell it all off. I bought some off Callums trailer, and will be going over there in a couple of weeks to check out the rest, thanks Callum. That’s saved me having to go shopping at the expensive lumber place.

I’ve fitted up the seat front on the port side, that’s stiffened up the structure a lot and I’ll be making the pattern for the seat top next.
There were two full plywood sheet length pieces 400mm wide left over from scarfing up the bottom panel, and I’m hoping that they’ll be deep enough to be the offcentercase sides.  If not, the rowing seat support stringer will be used as a doubler so I can add whatever extra is needed to the top edge.
The ‘case cant go in until I have the stringers and lowest plank on but in the meantime I can make it up, plus the ‘board and its pivot. ( PS. I think that they'll need about 40mm added.  No problem, thats easy). 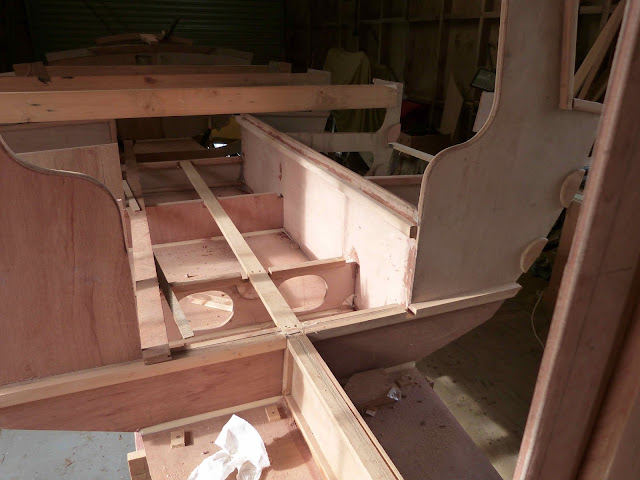 The cockpit on Long Steps is 3.2m long (almost 11 ft).  Thats including the area under the cuddy roof and the area aft of the raised cockpit floor. Aft of that is an area with no seats, just floorboards under which acts as a drain well for the bilge pumps and venturi, its where my bean bag will go and gives me a place to stand when sailing to rest my behind from sitting on plywood seats.
The ballast tank forward end is at the bulkhead nearest you, the one in the middle is a support, and the one at the after end is the next one. About 120 litres of water, thats close to 250 lbs of ballast which should help her stand up and go in a breeze.

I want to use the seat tops to brace B#4 through to B#7 so they wont move when the stringers are being wrapped around, and its much easier to fit them now than when the hull is further along. 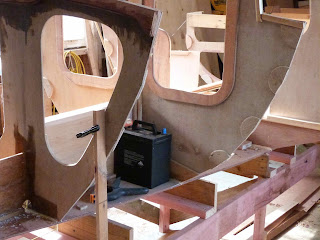 Its late afternoon now. My little dog cant speak, apart from describing the outer covering on trees (Bark) and the drink made from grapes (Whine) but he can communicate very well and  he’s telling me its past time he took me for a walk. If I don’t go he’ll "growl" at me. Can't have that!
Back later.

Posted by John Welsford at 5:08 PM