When I found the little space for the stove, and the lovely little kerosene ( paraffin you Brits) stove that came with the boat I was very pleased, the galley is essentially a drawer which slides in under the cockpit and which is drawn out and opened to make a bench with stove space, a big stainless steel bowl for a basin, and enough space for some of the cooking utensils.
The stove though needed some small repairs, screw threads redrilled and tapped, new screws made up and  replacements for the jet and the pump piston.  It leaks a little too and the smell of kerosene is not nice, especially in a confined space.

I had not the time to repair the stove before I took May out cruising for the first time, so grabbed my spare camp stove.

Now,the story behind that is as follows.  I'd seen David Perillos stove in his pics here http://home.xtra.co.nz/hosts/david77/index01.html  ( watch the video about the egg and oyster omelet ) and wondered how it performed. Knowing that Dave is keen on his food I figured that it would be reasonable.
Next, I am a member of a customer rewards program called Fly Buys which offers prizes for points gained by spending with participating retailers. I had a few points about ready to expire, and noted a "Stainless steel camping stove" in the catalogue, other than the change of metals  it looked essentially the same as the one David P uses, so I ordered it.

Before heading out in May I tried it, only to make a cup of tea and you can see that in one of the early posts, it fits reasonably well into the space provided, leaving access to the burner control on the left hand side, and seemed to be fine.
The cartridges though are only 220 gr, about the size of a standard fly spray can, so when I spotted them on sale price I bought a heap .
$10 50 NZ  ( about $8 00 US) for three. I got 6.

Away we went, and the first meal was a canned stew with rice. No problem, the can had the top off and the paper removed, then washed, and it was stood up in the middle of the pot ( one burner here remember) among the rice.  By the time one was ready so was the other and the meal, with wholemeal bread and butter and an orange for dessert, was fine. I could get fat on that.

So went the 5 days, frequent cups of tea, some while on the move, some hot water for washing dishes, some for washing me, cooking meals and toast for snacks, and it performed fine. The burner has a built in lighter, the pot support is large and solid, the base is wide and stable, the burner control is accurate and easy to adjust, and the heat very good.

I've been over it carefully since, used a magnet to see just how much of it is stainless steel, and had a good look to see what quality it is.
Verdict?  Some small fastenings and a spring are ferrous metal so could be expected to eventally rust away, but it would not be difficult to replace those. Its well put together, well designed, has good features including a pretty good carry case. Its easily cleaned, looks good, the burner control is well away from things that burn hands,its controllable,  it can put out a lot of heat, and it cooks as good a meal as the cook is capable of.
Downers?  Maybe, but only maybe the cartridges could be bigger.  Bank on using one every two days, or less if you are cooking for the gang, but they are cheap and easy to carry, easy to replace and the're no big deal.  Just dont run out OK?

I saw one of these in a shop the other day, NZ$85,  thats about US$65.
Pretty reasonable value. 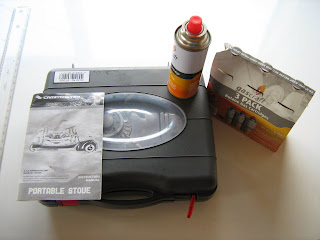 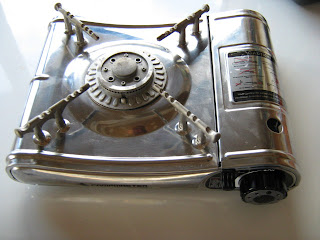 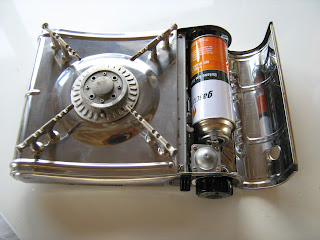 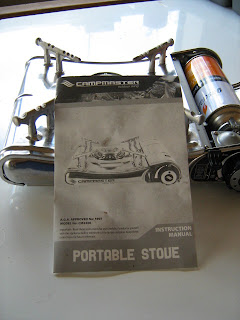