We have a fish around New Zealand called “Orange Roughy”. It’s a deep water fish, one that cooks up really well but is very long lived and slow growing so the harvest is severely restricted.
Well, this little boat could be called “Yellow roughy”. I’ve taken a few shortcuts, built it in a hurry, used materials that truly were otherwise scraps and some epoxy that was way way past its use by date so she’s not exactly a showpiece.
If I could not smooth it with the power sander  or angle grinder it did not get done!
But she is strong, and more than adequate to test the plans and her function.
I’ll do some more painting today, another coat on the interior.  I’m using water based enamel in pale grey. I might even put a coat of varnish on the rowlock block supports, they were a scrap of mahogany I picked out of the rubbish that I cleared out of the ship when I did the initial tidy up after buying her.  She deserves a little “nice”.
For that matter, the corner knees are 18mm construction plywood left over from a cupboard I built, the gunwales salvaged from some birdsmouth mast staves that did not cut the mustard for that job, the ply was two part sheets of 6mm Meranti that were left over from another boat, and the epoxy was the last of some samples of System 3 that the local distributors donated for me to publicise.
(good stuff by the way, incredibly tolerant of mix ratios among other virtues)
The rowlock plates and backing plates for the towing eye came from under an old Scow Moth I bought for $10, salvaged the fittings including some 20mm x 3mm brass strip which did the above jobs, the oars and rowlocks came from another boat, the paint was left over from repainting Dennys kayak, and the screws, well, I buy them in boxes of 1000, they are so much cheaper that way that it makes sense to buy a box even if I only need 2 or 300 so I always have a supply on hand.
Even the excellent Mirka Abranet sandpaper was a freeby, kindly donated for my beginner boatbuilder classes by Autolink Distributors Ltd http://www.autolinkdistributors.co.nz/.

I cant think of any part of “Scraps” that I had to go and buy specifically for the project. Everything came from corners of my shop, piles of leftover material or off the shelf stuff that had been bought for other purposes.

She’s been in the water every day since her “birthday”,  everyone who comes to visit me here on the river has been in and rowed her around, she never fails to raise a smile.

That was a fun project, and I’m pleased with the result.

Pics below, I'm sure you don't need captions, its 9 10 am and I need to get on with packing my tools in the truck. 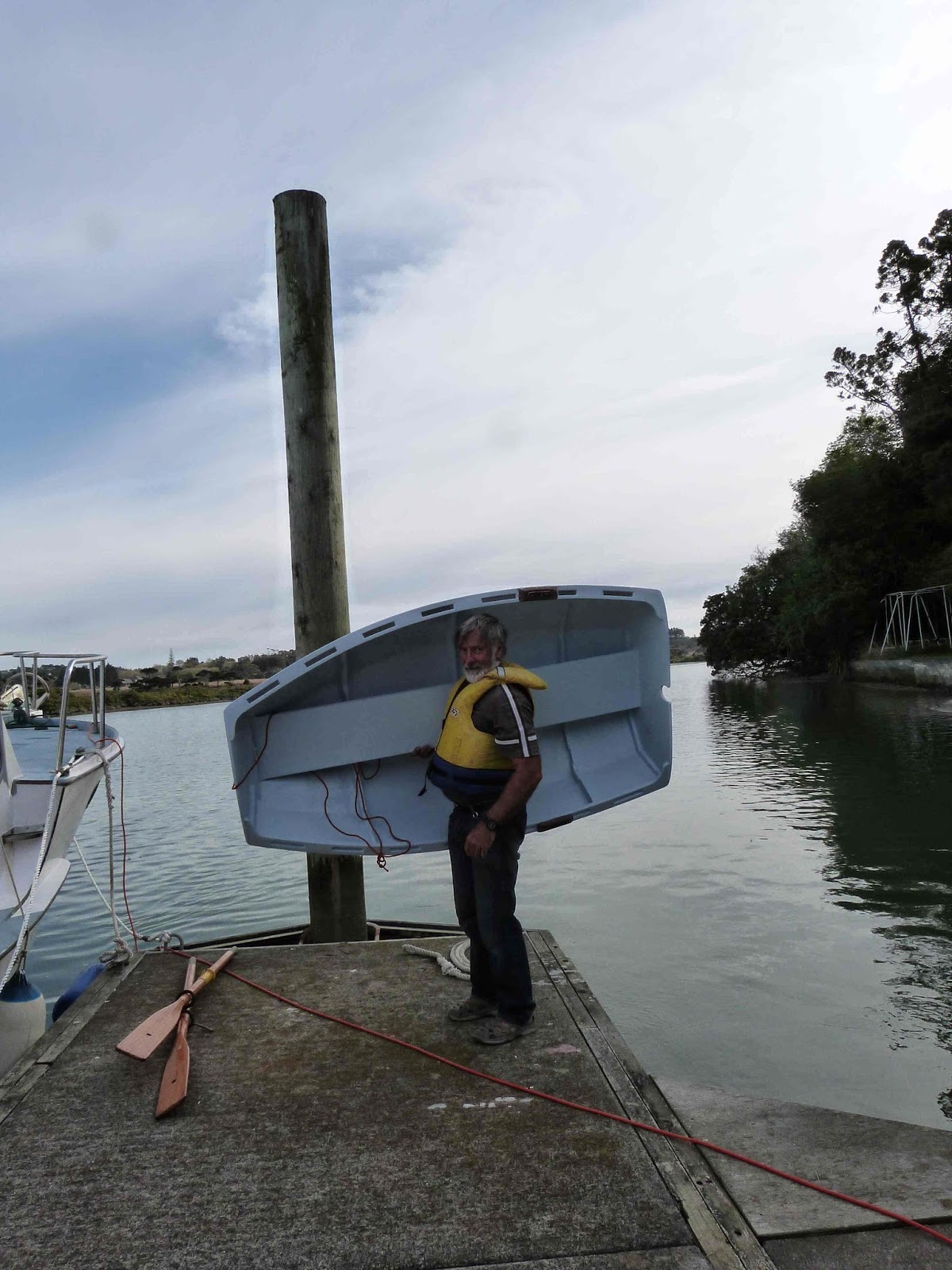 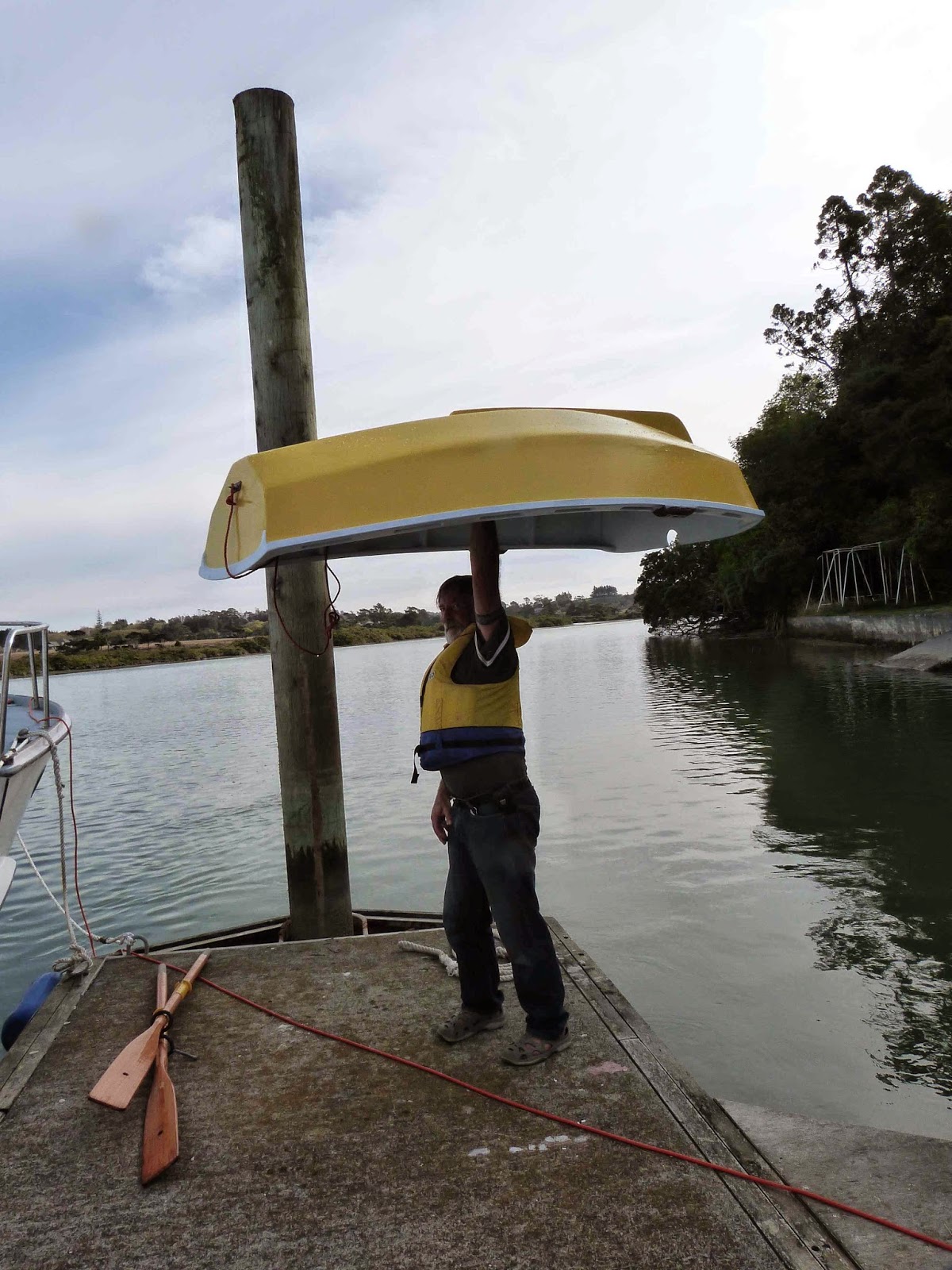 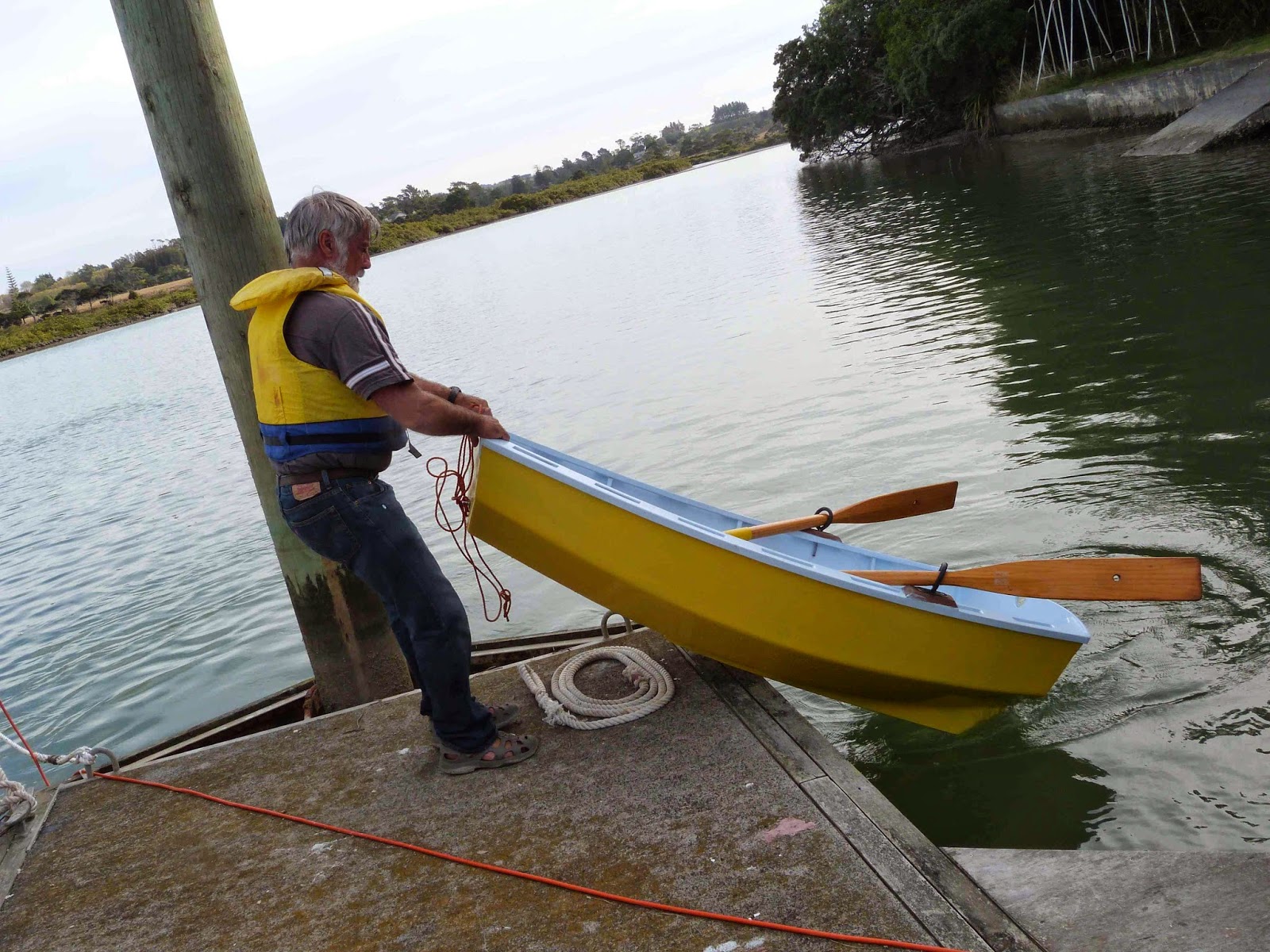 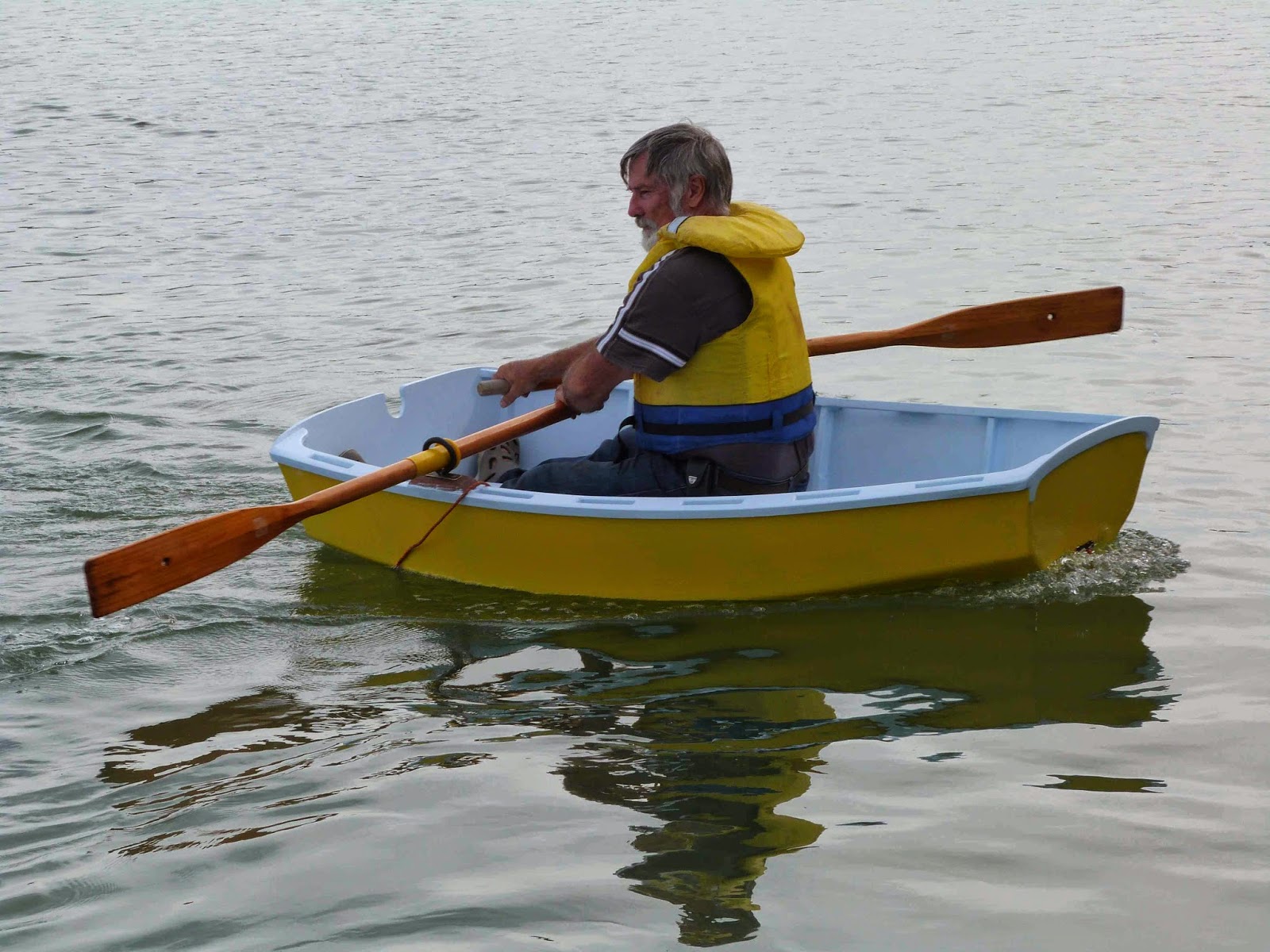 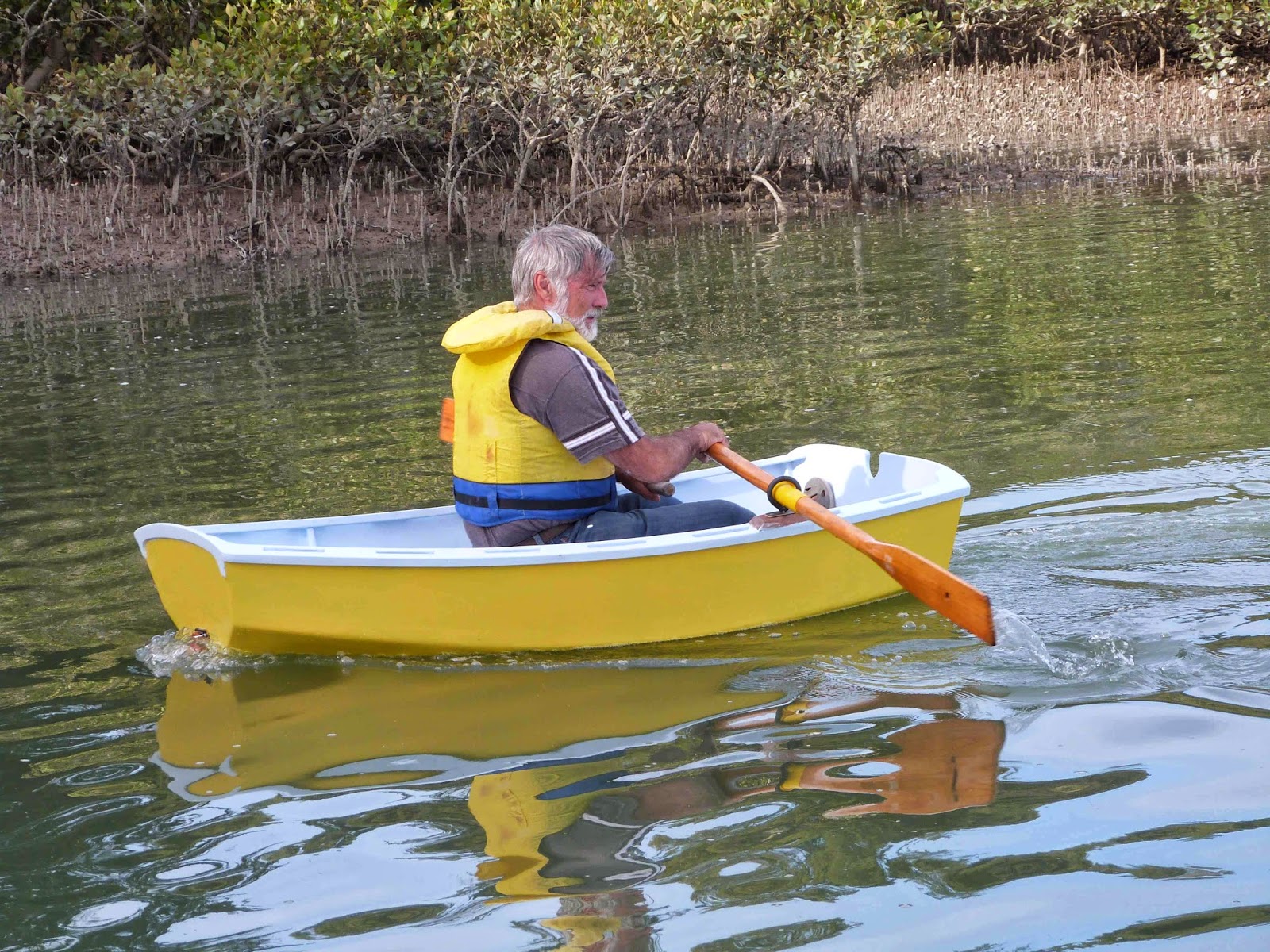 This afternoon I’m off to service a shopful of machinery at an educational institution.  I think that its run by accountants with no idea of the realities of machinery, ( apologies to those accountants who have) as the shop was built some 20 years ago, 12 woodworking machines installed, the teachers are essentially arts and graphics teachers with little or no practical experience with these machines. There has been no budget allocation to maintain them, no skills employed in house to set and service them, and now, only one of the 12 works!
I wonder why?
The management have just discovered that they cant run their courses because the national standard requires that the students learn to use these machines, and they need them set up and running.  So they want them all fixed “yesterday”.
That’s going to take a full day, plus 250 km travel costs.  That’ll help my budget no end.

Back to boatbuilding next week. Have a good weekend eh!

Posted by John Welsford at 1:10 PM