SEI. Some photos of the new project.

I promised some pics, and here they are. 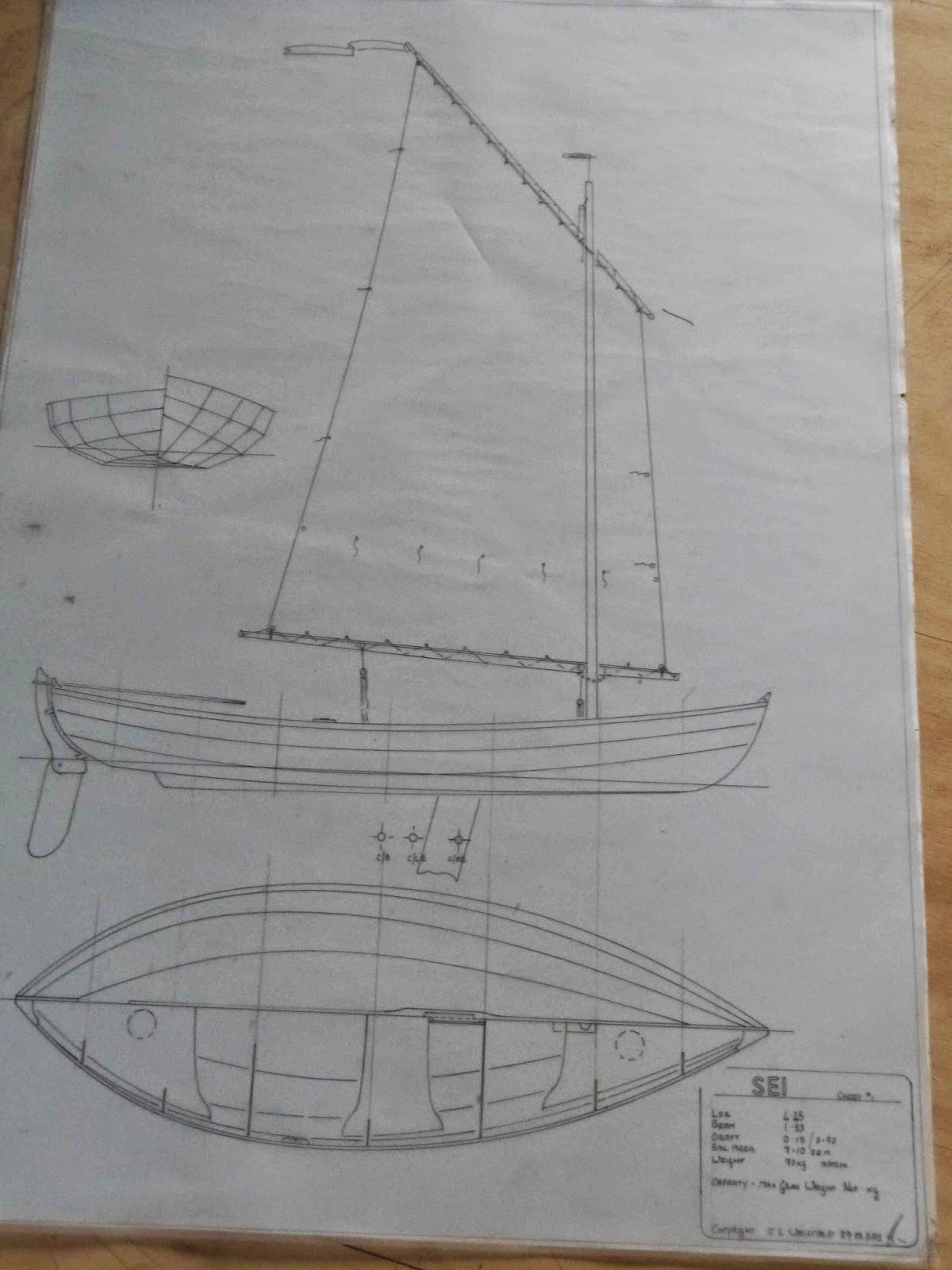 Note that she is a "sailing boat" first, thats evident in that the maximum beam is further aft than would be the case if she was to be a rowing boat first and a sailing boat second.  That said, anything this light and shallow will row pretty well, the difference being very small. But for sailing the skipper will sit down in the boat just aft of the center thwart, back to the gunwale and feet across, well supported and sheltered. To do this the underwater volume had to be be so distributed that she is on the correct trim with say, 200 lbs sitting there, that plus the wider after end will contribute stability at speed under sail so she'll heel less.

I now have all of the frames made, you’ll note that they are just simple plywood web frames rather than laminated ones, quick and easy to make. The same with the two stems, bow and stern, they are 9mm plywood (about 3/8in) with doublers each side which will take the bevel where the planking goes on.

The boat is made up of sub assemblies, one at each end carry two frames each slotted over the stems, these will be closed in by the seats forming big air tanks for buoyancy, and there will be another sub assembly using the daggerboard case to support Frames three and four.  Only Frame five is not located by slotting over a spine or the "case". 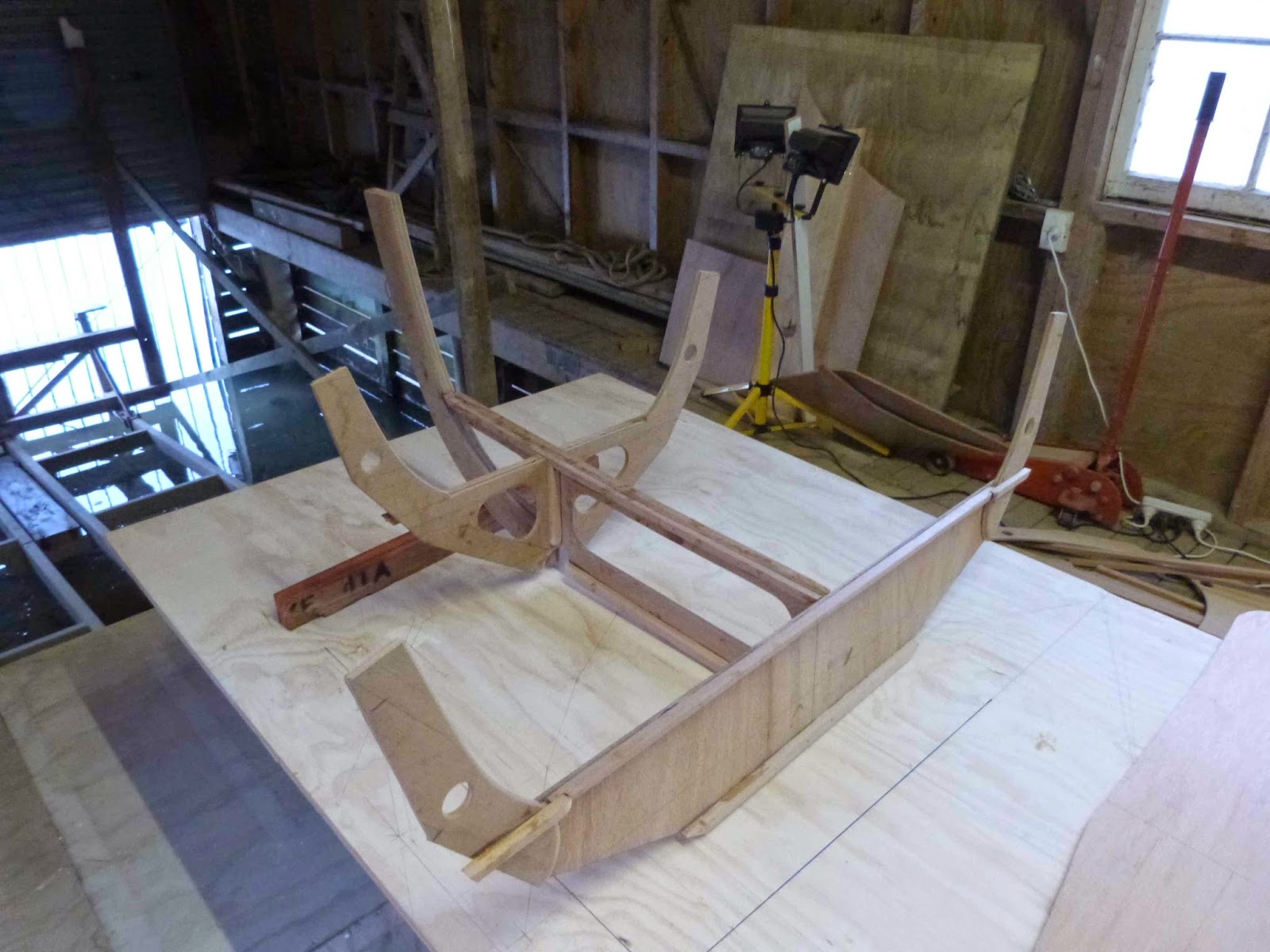 The stern sub assembly, stem, frames 7 and 6.  You can see that when the seat top is on there will be substantial enclosed volume in there, that can be used for small item storage and or bouyancy in case of a big "oops". 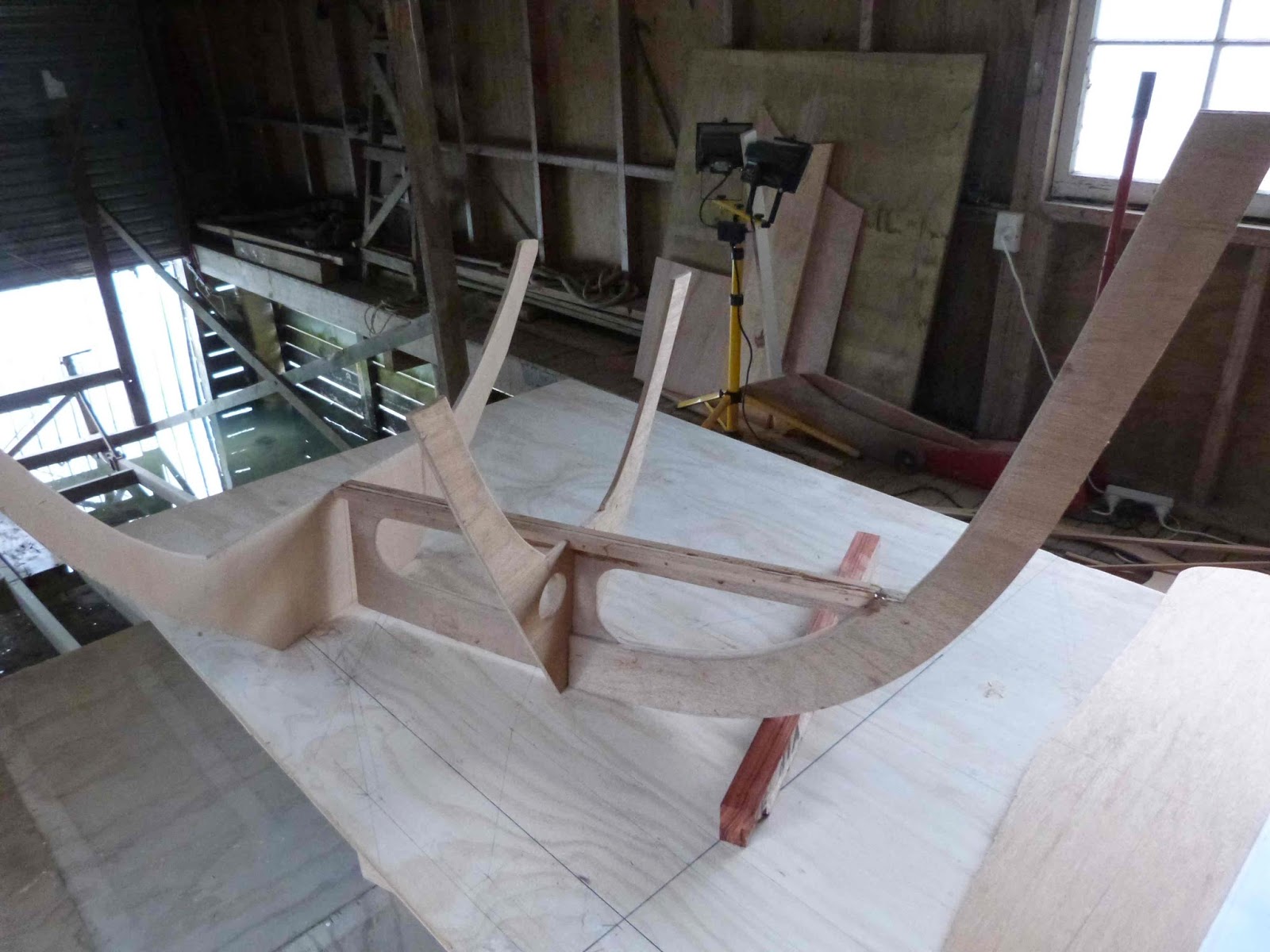 The bow sub assembly. She has a very fine entry and a much wider stern, that in part to reduce pitching in a head sea.

I expect some flack about the daggerboard, but I could not get a centreboard case in there and still have the seat height right for rowing. The board itself is fairly light and easy to manage so I don’t expect it to be a big deal in use, I’ll make a little cap to put in the top of the slot when rowing and will hold it down with a shock cord loop to minimise splash when rowing in rough weather.

This little boat is intended to be as simple to build as I can get it, and to require as little in the way of tools as possible. You could carry every tool needed to build this boat in a two gallon bucket, including clamps and whats required for the painting and fittings.  As always, more and bigger tools, things such as a bandsaw and a power sander will make it quicker but not really all that much.
I built my very first bigger boat, a 21 ft trailer yacht, with the only power tool being a 3/8in chuck Hitachi two speed drill with a jigsaw and orbital sander attachments.
The sawing of stringers, sanding of paint etc meant that my arms were pretty fit, but I don’t recall being much slower building than some of my friends doing similar boats.

Spars will be aly drawn tube with turned wooden plugs in the ends. I can start with bare tubes and be rigged by lunchtime, only needing to wait until the paint on the wood dries off so really its 24 hours from picking up the tube until I can go sailing.
The sail? I might just make my own this time,  I have a trade account with an outfit that supplies sailcloth and such, and  a brand new basic model sewing machine is surprisingly cheap.  That means that the trade ins are only pocket money so I’ll do a run around the shops sometime.

Oars, I don’t much like making oars and usually just buy a pair of seconds about the right length and attack them with a plane and spokeshave. That’s a little way off yet, so I wont worry about it for a while yet.

I have to build the boat first, this evening I glued up the three layers of 9mm plywood that make up the dagger board blank, and cut out the pieces that form the rudder blade. I’ll glue them up in the morning.

I’m very much enjoying this build. Its been a couple of years since I have been well enough to do much, and I find that as I get better I am ok for two or three hours a day out in the boatshed,  that is so good for the soul plus the exercise is bringing the body back to normal.
I’ll be sailing again next summer ( southern hemisphere of course), that’s around November here, and I want this little ship ready to go.

Posted by John Welsford at 2:06 PM