WInter has arrived, and a dog along with it.

Well, the shortest day has just gone past, today was 37 seconds longer,  gosh it made a difference! (heh!)  .  But seriously, while today is officially the second day of winter here in the Southern Hemisphere the prospect of lengthening days makes it bearable.
Today though, if winter were like this all the time, was beautiful.
Warm enough to take the sweater off,  not a breath of wind on the water to mar the mirror calm, and just the occasional light cloud in the sky.
I’m home again after a few days of the same old same old,  there  wont be a lot of  gas in the tank for a couple of days but each time it’s a step in the right direction.
I did manage a short paddle in the kayak, I’d had time for a short nap when I got back to the ship here on the river and when I woke it was about 10 mins short of  high tide so the kayak was slid over the side and I went off up the river.
Occasionally I make an effort for conservations sake and pick up  the rubbish I come across, today was one of those. There was a string of Steinlager bottles afloat,  necks up, six of them about 50 yards apart as though they’d been carefully set that way, but I must say that I don’t appreciate the skill shown to get that spacing right.
I also picked up the usual plastic Coke  and water bottles plus a few other bits and pieces,  since I began doing this the place is noticeably tidier. Almost park like.  I’m thinking  of putting a sign out in the middle that says “Keep off the grass”.

Denny and I had agreed to “shared custody”  Indy, of her little Border Terrier dog,  he and I get on very well together and Denny had been worried about me being on my own so much, so had sometimes sent me back here with him which was nice.  But he’s her dog, she trains him for agility where he has proven to be a quick learner and smart but easily distracted, and she likes to have his company when she’s on her own.
We’d thought that perhaps after the next trip to the North, SCAMP Camp and Academy courses,  Boat shows and Messabouts, I’d find a small dog, “ship sized” so to speak.  We’d thought perhaps a Cairn Terrier or Wire haired Foxy, and she’d do some training to “civilise” the little monster then I’d have a dog of my own.
But, she was idly flicking through “Trade Me “  (Our version of E Bay) and what should come up but a Cairn Terrier Cross needing a good home.   He’d been “widowed” so to speak when his elderly lady owner passed on back about Christmas time, none of the family wanted him and friends had volunteered to rehouse him. Yes I know, “one elderly lady owner” but this was not a second hand car!
Said friends came to visit us here on board, Denny was here with Indy, and after a very pleasant afternoon tea they went away but “Dimbleby” stayed. 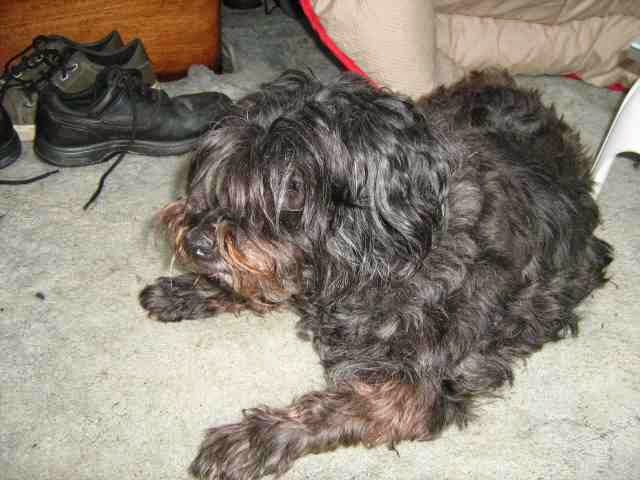 Yes there are eyes under there! When he arrived there was no way he'd let anyone near his face, or feet but the other day I had him calm and relaxed so clipped a little of the hair around his eyes, am working on getting him ok with me handling his feet so I can clip his claws, and he's even relaxing when being brushed.  He'll be ok.
By the way, 11.5 kg, and a real "Terrier" temperament.  Loyal, smart, chase anything that moves and no idea that a full grown Rottweiler is bigger than him.

He’s fitting in pretty well, is good company, after a few days to settle in has become a cheerful and outgoing little guy, attentive and loyal (to whomever feeds him at least) and generally well mannered.  He’s 11 years old so the commitment is probably a four to six year one which I can cope with, and I’m  very much enjoying having him around.
Posted by John Welsford at 10:51 PM