Happy New Year to all

One of the good things about this time between Christmas day and New years day is that here in New Zealand its sort of “slip time. Much of the country is on summer holidays, schools are closed, beaches full of swimsuits with people (sometimes) inside them, dogs sleep under shady trees, and the weather is warm and gentle. There are no lawnmowers within earshot, few heavy trucks on the roads, the earthmoving machines on the new subdivision along the road are silent,  and the world is taking a quiet break.
It’s as though these few days don’t count, there are no penalties for not getting on with the “honey do” list, no bosses griping about missed deadlines, no hurry, no pressure.  Would that life could be like that always!

But it’s a good time for reflection, both as to what the new year may bring, and about past victories or otherwise.
A couple of weeks ago I came across a pic of one of the really memorable design projects I’ve done.  The Mini Transat race is for monohulled yachts of no more than 6.5m long ( about 21 ft 4in) by no more than 3m wide ( about  10 ft). The vertical measurement can be no more than 14m (about 46 ft).  That measurement is from the lowest point of the boat with the keel, canting keel or daggerboards fully lowered to the top of the mast.
A short keel will allow a taller mast, and a deeper keel, vice versa.

They are an extreme development class, incredibly fast, originally intended to make serious singlehanded ocean racing achievable within a reasonable budget, but of course there are always ways of making boats faster by spending more money in spite of rules about exotic materials.

I was approached by Chris Sayer, then just out of his boatbuilding apprenticeship, top apprentice for that year as well, and was asked to design a Mini Transat.  She was built on a very small budget, using materials and techniques not far different to those used by a lot of amateur builders. Some very good skills make a difference though, but it was all fairly simple stuff.

He was third in the 1999 race, from France to the Caribbean, Her major sponsors sent me to Guadeloupe to “pitstop” Chris as he would otherwise be alone there, which was a real adventure on its own.

The boat has been raced with distinction by other owners ever since, is still doing well, and still holding up structurally in spite of many tens of thousands of miles under her. 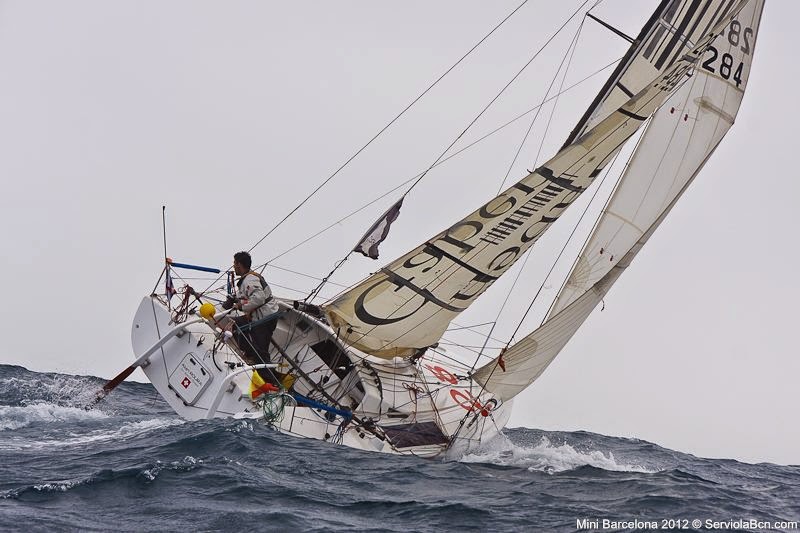 Here she is.  She carries a little over 2000 sq ft of sail downwind, around 450 sq ft upwind in a breeze, and remember, she is a singlehander with three daggerboards, twin rudders and a canting keel to keep track of as well as the rig.
There is little chance of being bored on these little monsters.

Having looked backward some, seeing as the time is 8 pm on New Years Eve, its time to think forward to next year.  I have seen the last of hospitals for a looong time ( fingers crossed) and hope to have a lot less holes poked in me by large women with various kinds of medical needles. I’ve more energy, and much more enthusiasm than I had this time last year so can plan ahead some.

Some of the planning for this year is around small things, you know, the things that continually annoy you but you don’t get around to fixing them so they continue to irritate.  One of those has been my workshop alongside my ships berth, the only area I had on which to put my tool sharpening equipment was a cluttered bench about a handspan too high, which made it very awkward to use, and very poorly lit which meant that even if I stood on a stool I could not properly see what I was doing.
So, yesterday I built a sharpening bench, its alongside a window,  I’ve wired in another power point to service the cordless tool charger shelf alongside it, and fitted a Zyliss universal vice to the right hand end of it.
I’ll build some shelving tomorrow, small ones to take all those boxes and jars of screws and nails. In a workshop as small as this one (14 ft x 28 ft floor space, but that’s about to be extended another 8 ft in length) it pays to be tidy or you very quickly end up not being able to find anything.
So that annoyance has been dealt with. Tomorrow I hope to sharpen all the tools. 5 Block planes, 8 chisels, three spokeshaves and a drawknife, a scorp, (look it up, they are an interesting tool) an adze and a broad hatchet.  I can start the year all sharp and keen edged. 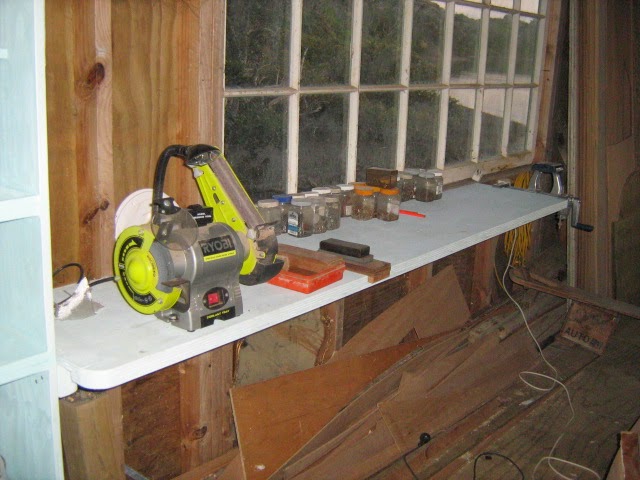 The new bench, painted with leftover paint from my wifes house painting job, and yes I built the other shelves earlier this year. Cant have too many. shelves.
The machine by the way is a Ryobi combination bench grinder and Linsher ( belt sander) . Its ok, sort of, you get what you pay for and it was cheap. Bear in mind that this is my number two workshop, the one that I have where I stay to be within commuting distance of that ( love hate relationship ) haematology clinic so I cant afford to buy the good stuff for this relatively temporary shop.

Sad things, I’ve lost 5 friends in the past 6 months, all people whom I valued, and my world is much the poorer for their passing.
Mike Monies, Mike Newstead, Rose Reid, Joe Porter and Pauline, that’s Jackie Monies Mum.
Vale, rest well, you’ll be remembered.
Posted by John Welsford at 12:08 AM