Buying the rope for the new boat.

Well, we’re past the spring equinox, so its autumn for a lot of my friends in the northern hemisphere, the best time of year many tell me.  We’re into spring here, warmer, more sun, and the orchards and fields are covered in flowers.
It’s a lovely time of year, while there are still stormy days to come the promise of summer is very evident and it’s a real incentive to get on with getting boats ready for the season.

I’ll have to haul the ship out this summer, its three years since she was antifouled and the topsides need painting, so I’m buying sandpaper, getting all the gear ready and will be all ready and prepared when the time comes.
George and Pam are getting some new steelwork done on the old slipway cradle at the Whangateau Traditional Boatyard and if that’s all done, that’s where I’m going.  I’d rather that they had the bucks than the corporate that runs the local marina.

I went out to day and happened past “Quality Equipment” in Glenfield on Aucklands North Shore. They’re rope manufacturers, and have a “rope shop” which is open to the public.  The prices are very very good.
Leon is the man there, good guy.
So, with rigging SEI in mind, plus some replacement  ropework needed on the good ship May, I stopped in and came out with a 100m roll of 6mm yachtbraid for halyards and controls, and a 100m roll of 4mm polyester solbraid for reefing lines on the smaller boat.
Yes I’ll have lots left over, but there will be other boats, and buying this way cost about $180. (US$113), That’s a lot of rope for the money, way less than the price the “yotshops” sell at.

Yes they do cut lengths although the best way to buy is a full roll. (Split it up among you and your friends). They’ll ship to you as well. (within NZ that is)

Email Leon at   leon@qe.co.nz   Tell him I sent you, it might help my discount next time I’m in there. 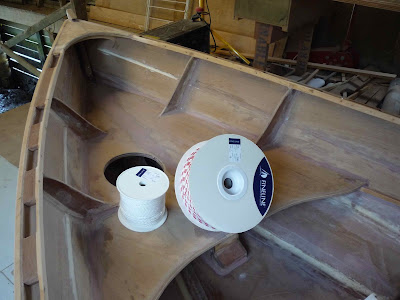 My next stop was not such a happy one.  I’ve a Bosch GEX 125 random orbital sander, its probably 15 years old now, done lots of work, had a couple of bearings and a new set of brushes, and while effective enough is not my favourite tool. But I because I have it, I use it.
I generally have fine paper on that and coarser paper on the Festool Rotex which IS my favourite tool of that type. But its worn out the velcro on the pad, so I went to the Power Tool Shop in Wairau road, yes they had one in stock, yes sir here it is.  That will be $89 thank you.
It should have been wrapped in gold leaf!

The tool is not worth that,  so the Power Tool Shop still own that part, and unless something changes that’s the last Bosch tool I’ll own.

I did though manage to find a pair of oars at a deal that was not a lot more than the cost of enough high grade lumber to make a pair.  they're heavy and a bit clumsy, the usual off the shelf ones, but with some effort with a sharp plane and spokeshave they'll be good. 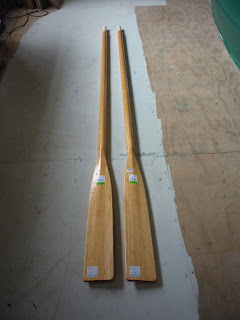 2.4 m oars. When buying like this I regard them as partly shaped blanks. I take care with the grain orientation of the shafts, and try to ensure that the pair are as evenly matched as possible although 8 footers are not commonly stocked now, most being bought for yacht tenders so are little 6 ft 6in ones, thats way too short for SEI.
I'll be running a "wot I did to these oar blanks" in a future blog, you'll hardly recognise them when I finish with making shavings.

Time to go and paint the mast for SEI, she’s looking good.

Posted by John Welsford at 8:28 PM